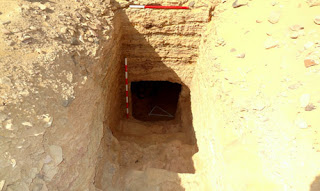 The entrance of one of the tombs courtesy of AFS

Two rock-hewn tombs from the Late Period (664 BC to 332 BC) have been revealed near the Aga Khan mausoleum on Aswan's west bank during excavation works carried out by the mission of Aswan Field School.

Nasr Salama, the director-general of monuments in Aswan and Nubia at the antiquities ministry, explains that the architecture of both tombs is very simple and each consists of a rectangular front hall with stairs leading to the burial shaft where remains of a sarcophagus and mummy are located.

According to Salama, the tombs are in a very bad conservation condition with plain walls without any decorations, paintings or funerary collection.

The owners of the tombs have not yet been identified but more studies and excavation inside the tombs should yield further information, he added.

Adel Tohamy, the head of the Aswan Field School said that the school aims to train junior archaeologists and restorers to use state-of-the-art techniques in excavations, restoration and documentation of monuments, as well as in archaeological surveying. 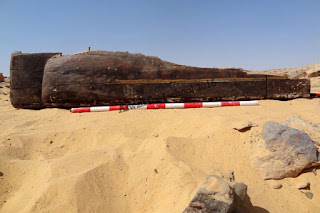 remains of a sarcophagus courtesy of AFS
Short link: