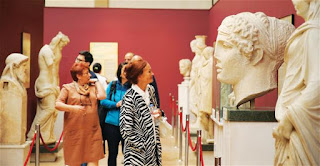 The Istanbul Archaeology Museums, home to artifacts from various periods of history, is celebrating its 125th year.

Opened by archaeologist, art expert and painter Osman Hamdi Bey, son of Ottoman Grand Vizier İbrahim Ethem Paşa, the museums are said to be among the top 10 museums in the world that were designed as a museum building.

Located in the Sultanahmet neighborhood on the Osman Hamdi Bey Slope connecting Gülhane Park with Topkapı Palace, the museum is home to some of the world’s most important artifacts, including the tomb of Alexander the Great and the Kadesh Treaty.

The structure is made up of three sections, the Archaeology Museum, the Ancient Orient Museum and the Tiled Kiosk Museum, and is home to one third of Turkey’s inventory of historic artifacts.

Istanbul Archaeology Museums Director Zeynep Kızıltan said the museum, which was opened on June 13, 1891, was home to artifacts from the whole Ottoman region, adding that displaying all the artifacts together at a museum was important in terms of tracking cultural processes.

Kızıltan said the museum had significant tourism potential because people wanted to see artifacts being unearthed in archaeological sites in order to understand the city’s history.

The director said the museums were especially important because it was the first museum in the Ottoman Empire, featured artifacts from the whole Ottoman region and has continued to house Ottoman- and Byzantine-era artifacts that have been unearthed in recent years.

One million artifacts in three museums

Three museum buildings of the Istanbul Archaeology Museums are located in four buildings, said Kızıltan.
After its opening in 1891, the Archaeological Museum expanded its collection rapidly. Currently, on the ground floor of the Archaeological Museum, sculptures from the Ancient Age from the Archaic Era to the Roman Era can be seen on the right side, while famous unique artifacts are on the left side. On the upper floor of the two-story building, there is the Treasury section, non-Islamic and Islamic coin cabinets and a library.

The Surrounding Cultures of Istanbul section, which was opened in the cellar of the new building in 1998, is a hall where artifacts from various ages found during excavations in the surrounding archaeological sites and tumuli are exhibited. The ground floor of the new building hosts a children’s museum exhibition.

The collections of the Tiled Kiosk Museum consist of approximately 2,000 artifacts belonging to the Seljuk and Ottoman eras, dating from the 11th to 20th centuries. In the Tiled Kiosk Museum, tiles and pottery chosen from these collections are exhibited. The collections of the Ancient Orient Museum include artifacts from pre-Greek Anatolia and Mesopotamia and from pre-Islamic Egypt and the Arabian Peninsula. The museum consists of sections focusing on pre-Islamic Arabian art, Egypt, Mesopotamia, Anatolia, Urartu and cuneiform documents.

Kızıltan said a total of 1 million artifacts were on display or housed in the museum’s storage.

“There are hundreds of rare artifacts among these objects. The Alexander Sarcophagus, the Sarcophagus of Crying Women and the Sarcophagus of Tabnit that came from the Royal Necropolis in Sidon in 1887 are among these objects. Besides unique artifacts such as the stele of the Akkadian King Naram-Suen, the Treaty of Kadesh and the Ishtar Gate, the Tablet Archive containing 75,000 cuneiform documents are also housed in the museum. Also, 60,000 artifacts that were unearthed during the Marmaray and metro excavations are kept in the museum,” Kızıltan said.

She said the museum received upward of 450,000 people annually but the number of monthly visitors had fallen since May amid a spate of terrorist attacks that has frightened would-be visitors to Turkey.

Kızıltan said the display areas of the museum had grown old in the 125 years since the facilities were opened, adding that restoration work started in 2011 against a possible earthquake.

“Work is almost complete in two thirds of the museum. When the restoration is done, the new exhibition project will be initiated,” she said.

Kızıltan said a new exhibition project would increase the number of exhibition spaces and artifacts.