Hidden Luxor - East Bank the disabled report
Egypt may have poor disabled facilities but it makes up for it by having the most helpful people in the world.  Guardians, supervisors, police and even a couple of men sitting having coffee leapt up and helped me get where I wanted to go. If I wanted to get there by God they were going to make sure I did. Nothing was too much trouble and it made me love Egypt even more.


I got a taxi round from my house to Karnak. As it is 18 km by the bridge it would have taken too long and used up the battery. I was not going to risk the ferry lol. At the car park only coaches and minibuses are allowed in and my driver was worried I might have a problem on the scooter, he need not. It was almost like a royal progress. Gates were opened and everything was made easy. The visitors center is up on the pavement but I managed to find a place with a slope and there were ramps to go inside and ramps to the model. The ticket office was outside and to get onto the plaza I had to go through a shop to get to the ramp but absolutely no hassle. On the plaza there was a step up however there was a ramp but it was obstructed by debris from  some repair works and tricky to get through. I complained to a worker and he promised to clear it up by the time I got back and all credit to him it was cleared when I got back.

The entrance to the temple has a narrow security gateway but the police encouraged me to go round it where they sit and searched me there. On the quay there was a small steep ramp and then a more gentle ramp. The ground was very bumpy with uneven paving.  Amazingly enough I met a man who organised trips for wheelchair users and he was stunned when I said I was writing a guide book and adding helpful tips for disabled tourists. We exchanged business cards!

The first court and most of the central Amun temple is paved so perfectly ok for wheelchairs although very bumpy. I was able to get as fair as the holy of holies . 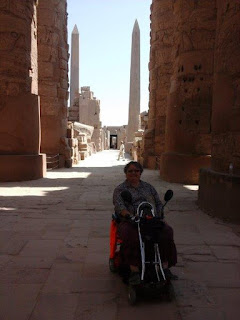 I could not get to the festival hall of Thuthmosis III, didn't attempt the Ptah temple as that is a sand trap. It was pretty sad to see the deserted café and remember the past. 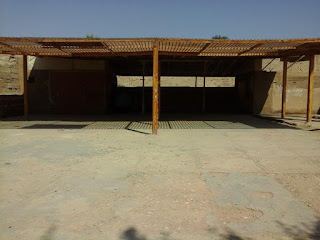 I went out to the Knonsu temple and the path through the block yard was great but before the path around the Khonsu temple was reached it stopped.  About five yards of stony ground which is almost impossible. Although there is a path around the temple it was blocked by scaffolding and the inspector there said it would be up for a couple of years. I complained about that too and he did say he would tell the moudir. I hope he does. 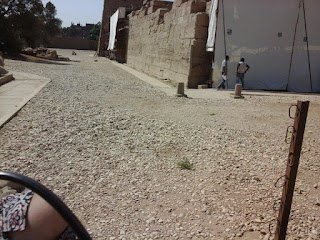 I have a simple really cheap solution extend the path with mud brick. That makes a smooth surface, it is very cheap, does not harm to any temple surface and it is aesthetically pleasing. Also please make ramps 1:12 like this diagram.

I tried to go to the new area of the temple of the hearing ear. With massive help from guardians (see photo) I got inside but although I had been promised it was disabled friendly there was a step, ramps were too step and the pathway to it was impassable. 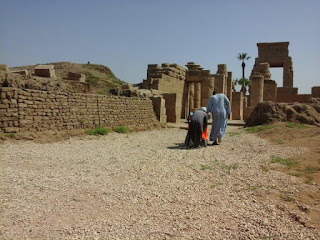 Still I did get to see it with considerable guardian help. 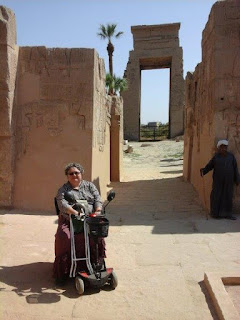 The open air museum was a total success paved everywhere except the area leading to the Tuthmosis IV colonnade. I got some great photos, although the lack of signs was very frustrating. 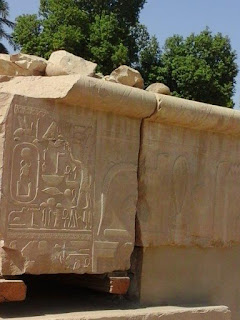 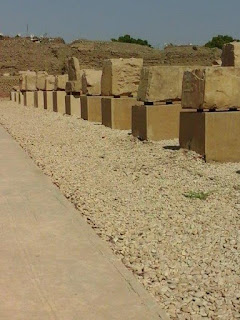 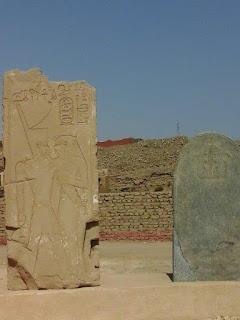 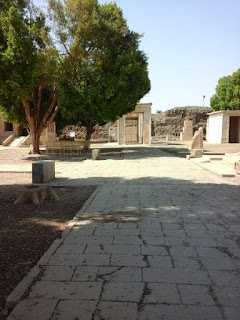 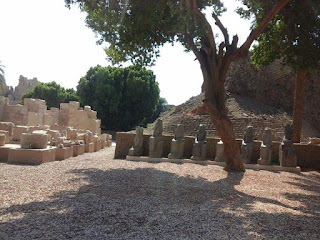 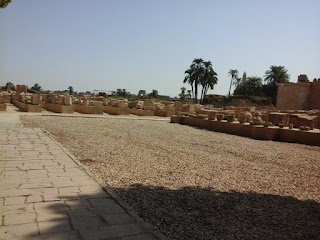 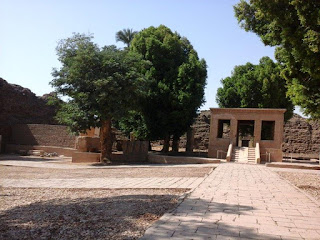 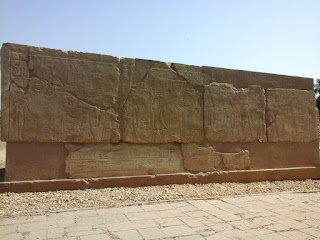 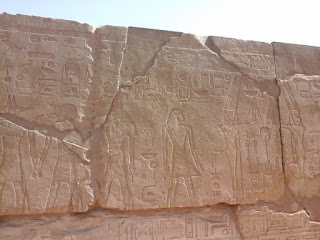 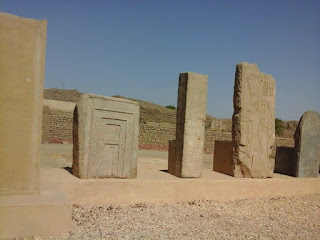 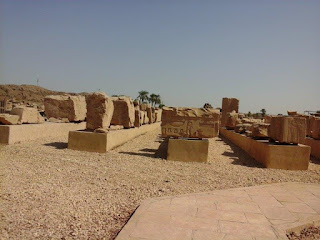 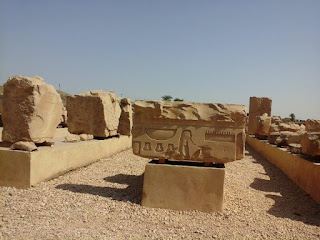 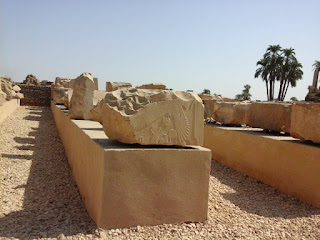 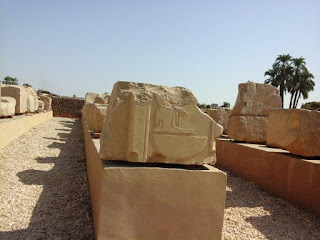 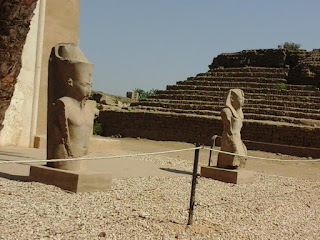 So the Amun temple was 75% OK, Khonsu was a wash out and the open air museum a joy. Now it was time to try the Mut temple.

I went back to the visitors center and asked for directions how to get there as I had only ever gone by car before. I also asked if someone could come with me and I was sent this nice young man called Mahmoud. He was really wonderful. He took me a slightly long way as the quicker way had a step. When we got to the ramp leading down to the part of the sphinx alley that goes east/west  against the main alley going north/south. We looked at ways and means, the alternative through the village on sandy soil versus the steepness of the ramp and the condition of the pavement which was terrible. I remember Mansour Boraik telling me the pavement of sphinx alley had been broken by flooding. I hadn't noticed walking but you sure notice on wheels. 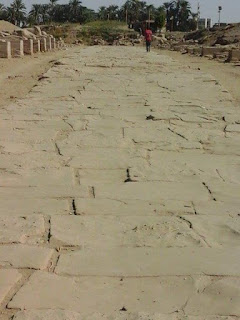 Again a complimentary sidewalk of mud brick would solve the problem. About a third of the way along I wanted to give up but sent Mahmoud ahead to see the condition of the temple and was it worth it. He came back with the guardian who said it was paved and alright. So I went off the pavement and tried the ground by the side. With the guardian pushing we got there. The central aisle is paved and good condition so it was worth it and it had changed a lot since I was last there. Really well laid out, sadly at the end there was a large step and the surface pretty bad but I was satisfied. I would judge the site about 35% ok for disabled. 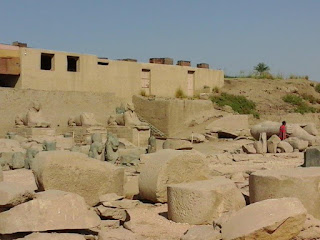 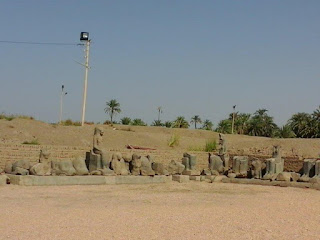 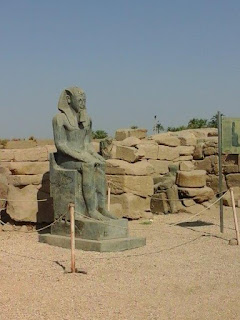 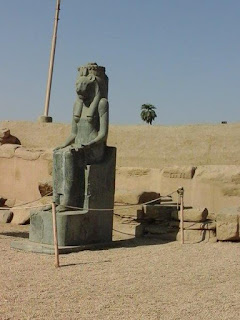 I had wanted to go back alongside sphinx alley but Mahmoud warned me the road was very broken due to the new gas pipe being laid and obviously the alley itself was not an option with the broken pavement. So I went along the road. I did think about going along the corniche but the road had a padlocked gate so that wasn't an option. So I used the road, it was OK but I was glad I had the hi vis jacket and knew my way.

When I got to Luxor temple I took one look at the entrance way with its steps and massively steep ramp and knew that was impossible. So I went to the exit, there were a group of police men there, immediately saw the problem and they got some help. The exit gateway was opened up, I was searched one the ramp (the entrance has x-ray) and the ticket office guy came out and took my money over the wall. I was so impressed how helpful they were. 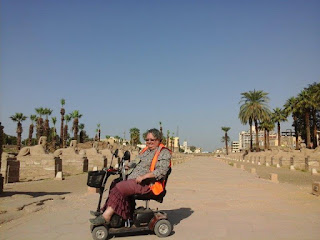 Luxor temple was great until I got past the peristyle hall, there was a huge set of steps and a steep ramp. I guess I could have got help but by this time I was pretty tired so exited. 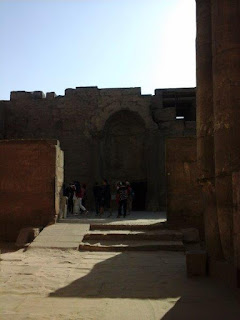 I then went touristy and got a MacDonalds and went for a hair cut. When I got to the shop I used my horn to try and get attention from the shop to help me get the scooter on to the pavement and into the shop. Almost immediately two men having shisha and coffee next door jump up and helped me carrying the scooter up the kerb to the pavement and into the shop.  I can't tell you how much I appreciate it Also all this time, all this help, nobody wanted money. I did give Mahmoud a tip, he was with me over an hour. He did not want to take it and I had to press him but in the end I said it was for his mother. I knew that would work. 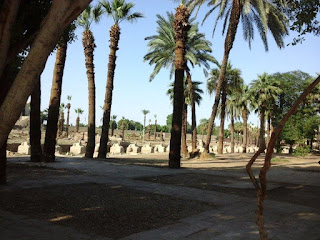