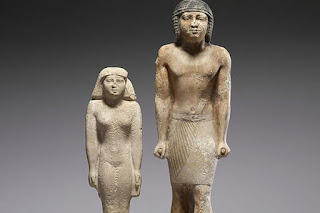 The pair statue of Nenkheftkha and his wife.


Two tombs and the remains of a Ptolemaic temple will soon be open to visitors near the Upper Egyptian town of Beni Sweif, reports Nevine El-Aref

To the west of Beni Sweif lies the Deshasha Cemetery with its rock-hewn tombs of Ancient Egyptian Old Kingdom officials cut into a cliff above the desert plain. The site was investigated in 1897 by British Egyptologist Flinders Petrie, who discovered several tombs from the Fifth Dynasty as well as others from the 18th Dynasty.

Egyptologist Naguib Qanawati later worked at the site for 15 years early in the 20th century. Among the best-preserved tombs at the site today are those belonging to the bartender Inty and the supervisor of the royal palace garden Shedu.

Omar Zaki, director of Beni Sweif antiquities, told Al-Ahram Weekly that Inty’s Tomb included two main halls, the first having three pillars and painted walls depicting the deceased in different positions with his family and deities as well as in hunting, cultivation and artisanal scenes including woodworking.

The second hall is perpendicular to the first and does not have any paintings or engravings. The burial shaft is eight metres below ground level. “There is a rare relief depicting a group of Egyptian military lancers invading a fortified town in Asia on one of the Inty tomb’s walls,” Zaki said, adding that according to the hieroglyphic text on the wall the town was in southern Palestine. Further studies might reveal its name, he said.

The tomb of Shedu is similar to that of Inty but contains an important relief of two bulls fighting one another. The Ministry of Antiquities in collaboration with the Beni Sweif governorate is now developing the Deshasha site in order to make it more tourist friendly and to open it to visitors.

“Both tombs are in very good condition and do not need any restoration work,” Zaki said, adding that the road leading to the necropolis was well paved and accessible to visitors. He said that in order to make the site more tourist friendly it only needed signboards, a lighting system, and a ticket kiosk.

The funerary collections from the tombs are now on display at the Petrie Museum in London. They include two well-preserved linen garments as well as pottery.

In the tomb chapel of the ancient mayor of Deshasha, Nenkheftkha, neighbouring the Inty tomb, an Old Kingdom statue of the tomb owner was also found and is now in the British Museum in London. The statue, carved in limestone, shows Nenkheftkha standing with his left leg forward and his arms at his sides. He is wearing a short kilt and a black wig on his head.

A statue of Nekheftkha in a similar position with his wife Nefer-shemes standing with her feet together and wearing a close-fitting robe, necklace and a long wig was also found in his tomb, and this is now exhibited in the museum of the Oriental Institute of Chicago in the US. Each statue was carved separately and altered prior to burial to fit into a shared base.

The Gabal Al-Nour site in south Beni Sweif is also under development. Egyptologist Rabea Eissa told the Weekly that the area included the remains of a limestone temple from the reign of Ptolemy II and a residential area.

The remains of the temple were uncovered in 2014 and highlight the history of Ptolemy II’s rule, who reigned over the country for 36 years. The external walls of the temple’s eastern side are decorated with scenes depicting Ptolemy II in various positions before the Nile god Hapy, while other walls bear hieroglyphic texts that shows Gabal Al-Nour’s ancient name of “Isis, lady of the Mirouwat.”

“This means that the temple was built on the ruins of an even older ancient Egyptian temple,” Eissa said. He added that in 2016, the hall of the temple had been uncovered along with a large tomb. To the west, the foundation of the temple kiosk had been found decorated with ancient Greek texts.

These show that the architecture of the temple was influenced by that of the Late Period and the later Roman Empire, with Roman rulers making their own additions to the temple.

“This shows that the temple was used in the Roman period,” Eissa said, adding that a residential settlement from the Byzantine era had also been found beside the temple, showing its continued use in the Byzantine period.

Mudbrick foundations have been unearthed, as well as the remains of walls and halls. A collection of rounded ovens has been found filled with ashes. “These items have been restored, and the mission team is documenting them,” Eissa said, adding that further excavations would be conducted in December to reveal more of the temple’s secrets.

Early this week Minister of Antiquities Khaled Al-Enani visited both sites and gave the go-ahead for their development. He also visited the Ramses II temple in Ehnasia, where he inspected a project for decreasing the subterranean level.

Ehnasia houses a number of tombs and temples from the Middle Kingdom to the Roman period. Among the most important is a temple dedicated to the local ram-headed god of fertility Herishef, whose name means “he who is upon his lake.”

The Ramses II temple was founded in the Middle Kingdom but was enlarged during the 19th Dynasty with major additions being made during the reign of Ramses II. It consists of a forecourt with side chambers and a colossal statue of Ramses II in front of the columns.

Beyond it, there is an entrance hall with a double row of eight palm-columns. Behind it, a hall with six pillars leads to the inner chambers where the temple is found. There are many column bases and fine reliefs scattered across the site.