Restoration work on the Al-Tunbugha Al-Mardani Mosque in Cairo is to begin at the end of October, Nevine El-Aref reports 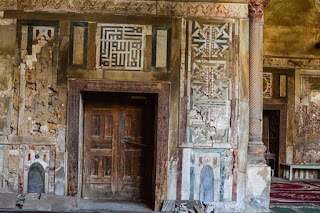 In Bab Al-Wazir Street, a major road from the 14th century running from Bab Zuweila to the Salaheddin Citadel in the Al-Darb Al-Ahmar district of Cairo, stands the Al-Tunbagha Al-Mardani Mosque with its Mameluke architecture waiting for restoration.

This building, like other Islamic monuments located in heavily populated areas, is suffering seriously from environmental dangers including air pollution, a high subsoil water level, a high level of humidity, and leakage from street water and the neighbouring Al-Madiaa, a fountain used for ritual ablution.

“One of the most serious causes of the damage has been the ill use of the Mosque by worshippers, as well as the encroachment of traders over the centuries,” Mohamed Abdel-Aziz, head of the Historic Cairo Rehabilitation Project, told Al-Ahram Weekly.

He added that the place of the mosque in a busy residential area had added to its deterioration due to the behaviour of the area’s inhabitants who had sometimes placed garbage beside it.

The mosque was also subject to poor restoration practices in 1896 by the Arab Heritage Conservation Committee that was responsible for Egypt’s Islamic monuments at the time.

Abdel-Aziz said that in order to rescue such a distinguished monument from falling into oblivion, Minister of Antiquities Khaled El-Enany had agreed with Director-General of the Aga Khan Foundation Luis Moneral to immediately start its restoration.

French expert Christophe Polio from the Aga Khan Historic Cities Programme (AKHCP) inspected the mosque earlier this week and has confirmed that it was in a critical conservation condition.

“The prayer hall is the most deteriorated part of the mosque and needs to be completely rehabilitated,” Polio told the Weekly. He said that the walls of the monument had cracked, masonry was damaged, marble work had deteriorated, and the decorations of the walls and most of the flooring were broken.

The mosque is currently closed to prayer and visitors.

Polio said that he would write a detailed report on the mosque’s condition and a suggested plan for its restoration. Both are to be submitted to El-Enany for discussion in a special meeting with Polio early next week.

Abdel-Aziz said that the Al-Tunbugha Al-Mardani Mosque was one of the finest monuments of the 14th century, built in 1340 CE by prince Al-Tunbugha Al-Mardani who was the son-in-law of the Mameluke Sultan Al-Nasir Mohamed. It is for this reason that its traditional hypostyle and riwaq (corridor with arcades) plans are very similar to the ones found in the Al-Nasir Mohamed Mosque at the Citadel.

At the time of its building, the mosque was one of the most opulently decorated in Cairo, marked by the first fully octagonal minaret and large dome and three axial entrances as well as other innovations.

Al-Nasir Mohamed contributed to the construction of the mosque just as he did for another son-in-law, prince Aqsunqur, the builder of the Blue Mosque further down the same street.

The exterior facades of the mosque are decorated with recessed panels crowned with stalactite (honeycomb work) hoods with two windows on each panel. A Quranic inscription band runs along the top.

The interior of the mosque consists of a vast open courtyard surrounded by four riwaqs supported with marble columns. Above the arches are a row of alternating keel-arched niches and medallions, and above each medallion is a lozenge form. On the keystone of each arch the stones are framed with a continuous molding forming a loop.

A beautifully carved fountain in the form of a domed small pavilion stands in the middle of the arcaded courtyard.

The mosque has very distinguished mashrabiya shields separating the prayer hall from the courtyard facades. The qibla (prayer direction) wall is ornamented with fine stucco work with unusual tree motifs. The mihrab (niche indicating the direction of prayer) has a doomed nine-column maqsura (chapel) decorated with mosaics and a marble frame.

The minaret is also remarkable because its sculpted stalactites take the viewer’s eye from one level to another.