Tutankhamen Head Sells for $6 Million, Despite Protests from Egypt - The New York Times

Tutankhamen Head Sells for $6 Million, Despite Protests from Egypt

Christie's said the sale was legal. But Egypt's government says the antiquity was looted and should be returned. 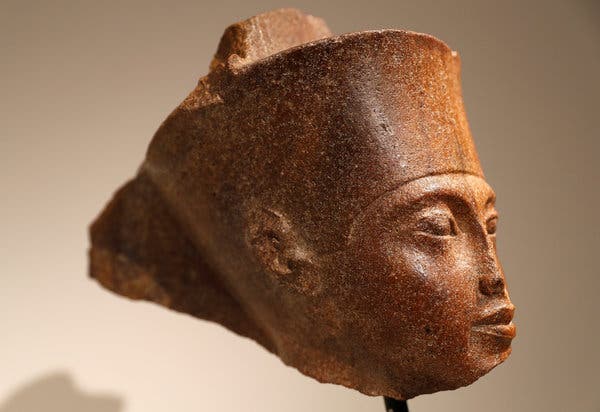 LONDON — "It was smuggled. It belongs to Egypt," said Magda Sakr, one of a dozen protesters gathered outside Christie's auction house minutes before a stone head of the pharaoh Tutankhamen was set to be sold on Thursday night.

"I believe these things should be in a museum. They shouldn't belong to one person," added Ms. Sakr, holding a placard that read "Save Tutankhamen Head. Egyptian History is not for Sale."

But despite protests from Ms. Sakr, and from Egyptian officials, the sale went ahead.

The brown quartzite sculpture of the god Amen, carved with the features of the pharaoh Tutankhamen during his brief reign, was the star lot of Christie's annual "Exceptional" auction of trophy objects from across the centuries.

Dated by the auction house to about 1333 B.C. to 1323 B.C., and described as having a "particularly sensual" mouth, the head sold for £4.7 million pounds, or about $6 million, with fees. But competition was subdued. The lot attracted just two hesitant bids from anonymous telephone bidders.

Did the limited bidding reflect the controversy that swirled round this object before its sale?

Weeks before its auction, the 11-inch-high head had been the focal point of protests from the Egyptian authorities, who objected to the inclusion of about 30 ancient artifacts from their country in auctions this week at Christie's.

Zahi Hawass, a former Egyptian minister of antiquities, told The Guardian newspaper last month that he believed the Tutankhamen head had been taken from the temple of Karnak in Upper Egypt and illegally exported in 1970. He added that if Christie's did not have papers to prove that it left Egypt legally, then the sculpture should be returned.

The date of 1970 cited by Dr. Hawass is significant: That year Unesco instituted a landmark international convention to prohibit and prevent the illicit trade in cultural property. Objects without documented ownership histories, known as provenances, that extend beyond that watershed have become regarded as problematic for museums and those involved in the legal trade in antiquities.

"The sale of such precious Egyptian artifacts is a huge shame," said Tarek Adel, Egypt's ambassador to Britain, in a statement on Wednesday. He said that Christie's proposed auctions reflected "a deep lack of respect to our efforts to stop this happening as well as a total disregard for relevant international legal provisions and conventions."

In a statement issued on Tuesday, Christie's said it had "established all the required information covering recent ownership and gone beyond what is required to assure legal title." The sculpture "is not, and has not been, the subject of a claim, nor has it been previously flagged as an object of concern, despite being well known and exhibited publicly," the statement added.

The provenance published by Christie's states that the stone head was acquired in 1973 or 1974 by Josef Messina, the director of Galerie Kokorian & Company, in Vienna, from the collection of Prinz Wilhelm von Thurn und Taxis, who is "understood" to have owned the piece by the 1960s, according to the catalog.

The sculpture was subsequently owned by two further private individuals, Christie's said, before being acquired in 1985 by the German-based Resandro collection, which was the seller in London.

The object's pre-1970 provenance was confirmed by Mr. Messina in the form of "a notarized affidavit which is part of our provenance documentation," Catherine Manson, Christie's global head of communications, said in an email.

But an article on the website Live Science, published in June, said that the son and niece of Wilhelm von Thurn und Taxis, who died in 2004, said the aristocrat had no interest in art and had never owned the sculpture.

Galerie Kokorian & Company and Mr. Messina did not reply to repeated requests for contact made by email, telephone and Facebook message.

For those who participate in the international trade in antiquities, basing this object's pre-1970 provenance on the verbal recollection of a dealer, rather than any surviving document, does not weaken the legitimacy of Christie's sale.

"I don't think it's problematic," said Vincent Geerling, the chairman of the London-based International Association of Dealers in Ancient Art. "What is problematic is the attitude of the Egyptian government and the way they try to disrupt the sale of perfectly legal artifacts."

"The Egyptians have benefited from the sale of antiquities for more than 150 years," said Mr. Geerling, who pointed out that government-authorized stores sold antiquities in Egypt until 1983, when the country passed a law to protect its heritage.

Mr. Geerling said that the Unesco Convention applied only to objects that had already been "specifically designated" as objects of great importance, which he said would be unlikely in the case of the Christie's head. He added that "there is no legal basis" for museums' reluctance to acquire antiquities with provenances that did not stretch beyond 1970.

Objects associated with Tutankhamen, a short-lived 18th Dynasty pharaoh who died in his late teens, have a particular mystique and allure.

Howard Carter's 1922 discovery of his untouched tomb in the Valley of the Kings, filled with spectacularly precious objects, is the most famous moment of Egyptian archaeological history. An exhibition at the British Museum in 1972 of treasures from the tomb, including Tutankhamen's gold death mask, attracted 1.7 million visitors.

Tatiana Flessas, an associate professor of law at the London School of Economics, who specializes in cultural property, said that Christie's sale of the Tutankhamen head was a significant moment.

"It showed that a claim like Egypt's continues to be open to dispute," Ms. Flessas said. "Not every antiquity is cultural property."

Though the trade in antiquities is a "complex, opaque and quite slippery business," Egypt's call for the return of the sculpture was a "nationalistic claim, an anticolonial claim, with a moral rather than legal justification," she added.

"But if the provenance is flawed and the sculpture was looted, it should go back," she said.

A version of this article appears in print on July 5, 2019, on Page C4 of the New York edition with the headline: As Egypt Protests, Relic Sells for Millions. Order Reprints | Today's Paper | Subscribe
Posted by Glenn Meyer at 5:37 PM