An unusually wet year is responsible for the biblical-seeming swarm of pallid-winged grasshoppers, according to entomologists.
Video

A swarm of winged insects enveloped a pyramid: Sound familiar?

An invasion of pallid-winged grasshoppers descended on Las Vegas this past week, taking over the Strip and several of the city's most popular tourist spots, including the night skies above the Luxor hotel and casino.

The resort, a 30-story pyramid inspired by ancient Egypt, says that its Sky Beam, a powerful column of light issuing nightly from the peak of the pyramid, can be seen by airline pilots as far away as Los Angeles.

But the beam has also become a magnet for grasshoppers, which experts say could linger in Las Vegas for weeks.

Jeff Lockwood, a professor of natural sciences and humanities at the University of Wyoming who has written extensively about grasshoppers, said the infestation was not a cause for alarm.

A spotlight on the people reshaping our politics. A conversation with voters across the country. And a guiding hand through the endless news cycle, telling you what you really need to know.

"We can probably blame the Book of Exodus," he said. "I think that kind of planted a seed in Western culture and Western mindset of these outbreaks sort of being dark and dangerous."

Although some locusts are part of the grasshopper family, experts have reassuring news for the apocalyptically minded, who may be inclined to see parallels with the biblical plagues: These grasshoppers are not locusts.

An unusually wet year so far in Las Vegas, which has already exceeded its annual rainfall average of about four inches, is responsible for the arrival of the grasshoppers, said Jeff Knight, an entomologist with the Nevada Department of Agriculture.

The insects migrated from southern Nevada and possibly from as far as Arizona, according to Mr. Knight, who said they were not considered a problem species.

"They don't bite," he said. "They don't sting. People don't like them. That's understandable."

Grasshoppers are drawn to ultraviolet light, he added.

May Berenbaum, the head of the entomology department at the University of Illinois at Urbana-Champaign, said the Luxor Sky Beam was well known for drawing insects — almost always "a dense column of moths."

MGM Resorts International, which owns the Luxor, declined to comment.

Nancy Ryan, a comic who hosts the X Burlesque show at the Flamingo hotel on the Strip, posted a video taken by her husband, a comedian who performs as John Bizarre, early Friday morning of a swarm outside the resort.

"I think most locals are taking it in stride because this occurs every few years," she said. "Since there's more than usual, I think the dramatic videos are causing a bit of hysteria."

But the current sensation pales in comparison to the reaction in medieval Europe, where, scholars said, the grasshoppers' relatives — the locusts — were put on trial in ecclesiastical courts. The insects even had lawyers assigned to defend them.

"You're assuming the locusts are the work of the devil," said Mr. Lockwood, who wrote an opera with two of his University of Wyoming colleagues called "Locust: The Opera."

Grasshoppers get short shrift compared with other insects, scholars said. While crickets are full of symbolism and are often considered good luck, particularly in Asia, grasshoppers don't often evoke the same positive associations, according to Dr. Berenbaum.

Crickets "get the good press," she said. "Grasshoppers, not so much."

"Grasshoppers don't even come out well in the Aesop story," she added, referring to a fable — attributed to the ancient Greek storyteller Aesop — about members of an ant colony shrugging at a starving grasshopper who had failed to store food for the fall and winter.

Dr. Berenbaum said that "grasshoppers have been used in heraldic shields, family crests and the like, but usually because it's a pun on the name."

Mr. Knight said that in his 40 years as an entomologist, he had seen more significant outbreaks.

"We measure grasshoppers per square yard," he said. "It's really hard to quantify how many. It's kind of a unique thing that happens. We have outbreaks of insects periodically. I guess you'd call it an outbreak."

As the desert gets drier during the summer, the grasshoppers migrate to find food, Mr. Lockwood said.

"Their food source is getting pretty grim," he said. "By golly, the city of Las Vegas is just filled with patches of green. What might be the magnet is in fact the green plants, as much as the lights at night."

Brittani Sheehan, who lives just outside Las Vegas, reposted a photo on Twitter of a giant swarm of grasshoppers above the Luxor. 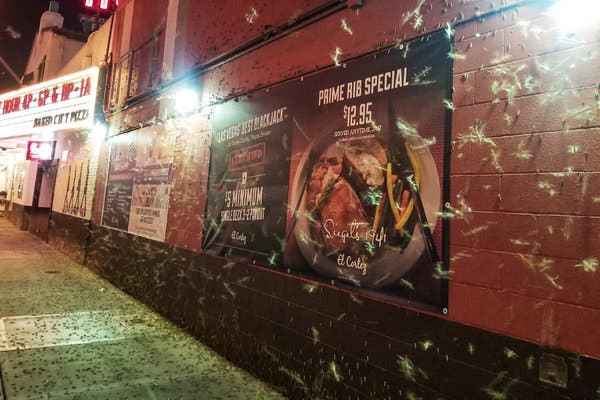 "The reaction isn't necessarily a fear, more so just an annoyance," Ms. Sheehan said on Twitter. "I'll have 12 grasshoppers leap in my mom's direction whenever she leaves the house."

The Las Vegas Convention and Visitors Authority said it did not have any information about the potential effect of the infestation on tourism.

Mr. Knight advised against spraying pesticides to kill the grasshoppers.

The pallid-winged grasshopper typically feeds on broad-leafed weeds, according to Mr. Knight, who said other insects, birds, lizards, foxes and coyotes can prey on grasshoppers.

Dr. Berenbaum said she was amused by all the buzz over grasshoppers.

"This is not going to be a plague of biblical proportions," she said. "It's always interesting to me when insects reclaim what was theirs."

Neil Vigdor is a breaking news reporter on the Express Desk. He previously covered Connecticut politics for the Hartford Courant. @gettinviggy • Facebook

A version of this article appears in print on July 27, 2019, Section A, Page 21 of the New York edition with the headline: Grasshopper Invasion of Las Vegas May Last Weeks. Order Reprints | Today's Paper | Subscribe
Posted by Glenn Meyer at 11:48 PM