"Every city, let me teach you, has its own smell."

Smells are everywhere and humans have always been conscious of them, but ancient Egyptians were among the first to document and judge smells.

The word smellscape refers to all the smells found in a given area. Many smellscapes together form a smellmap. The modern method of smellmapping starts with smellwalking – walking around in the city and recording the smells one encounters. Since odors cannot be recorded digitally, the notes can be either in writing or by recording one's voice.

Smells are perceived on a scale of good-bad with nothing in between. In fact, psychological experiments have shown that assigning adjectives to odors or creating clusters of smells are universally unsuccessful. Thus, during smellwalking, odors can be described with adjectives, by comparisons, with colors or forms. The description will depend on the individual's preferences, language and culture.

Why are smellscapes important in ancient Egypt and how can we study them?

The olfactory world of a city reveals many aspects of a culture: urban planning, social hierarchy, professional and culinary activities, customs and values, sexual behavior, hygiene, treatment of the sick, religious beliefs, differences between mundane and holy days, plant cultivation, and animal husbandry.

Smell of the palace

An official arrives in the palace to pay his respect to the king. He brings a large floral bouquet as a gift. The strong floral scent fills the halls of the palace and makes the pharaoh content. 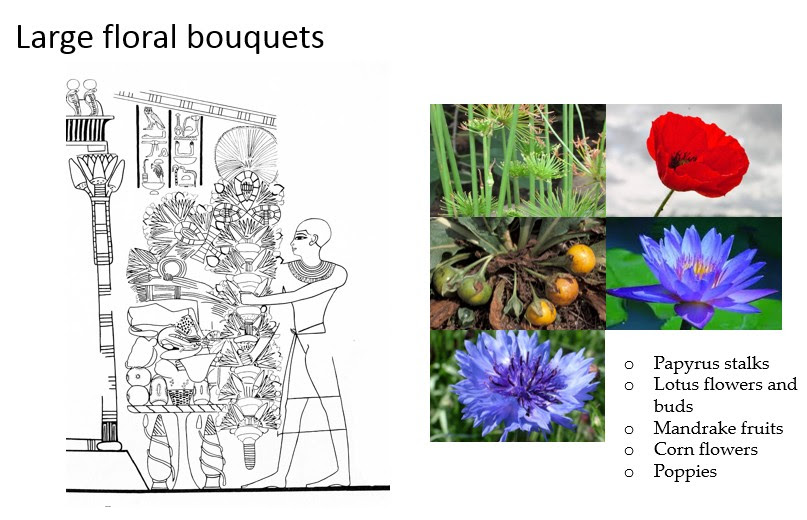 "Presenting all manner of fresh plants that are native to this land, the pick of the pools of the king, namely lotuses, lotus buds, reeds, mandrake, fresh myrrh from Punt, the scent of marsh-plants, all manner of pure flowers native to the land of god, in which there is joy and health, all that has been offered to the king of god[s], to the nose of his beloved daughter, Hatshepsut-Khenemet-Amun, who lives forever."

Smell of the temple

It is time for the daily temple ritual. The statue of the deity partakes in an offering consisting of roast meat, incense, honey, scented unguents, and flowers, yielding smells redolent of plants, herbs, vegetables, fruit, bread, beer, and milk.

"Presenting white bread. Words to be spoken: Perfect white bread. Provisions of bread in the following way (?): I am presenting (them) to your ka on my hands. Its hot smell is for your nose. (My) Majesty, while you are eating, your heart is (filled with) love."

"Offering choice cut of meat and reciting: I am extending my arms to the choice cut of meat of oxen, birds, gazelles, oryx, antelopes and ibexes. Your braziers are on fire. May you smell its fragrance! Its scent of fat rises up to the sky!"

The mixture of all these scents result in a strong and peculiar smell pervading the inner halls of the temple.

Smell of a garden

After attending to his religious and administrative duties, the king takes a walk in the garden he had proudly built for the gods. Filled with fragrant trees, flowers and herbs, the garden's purpose is to satisfy the gods and to contribute to the pleasant olfactory landscape of the city.

"I made a garden for him with offerings opposite the royal harem, planted with all manner of sweet-smelling plants and all manner of pleasant, fresh herbs from the field."

Smell of the House of Life

The scribal students enter the scriptorium called House of Life to dedicate their day to learning the Egyptian script. They need to make sure not to be anointed with unguent, especially myrrh, as their life must be simple, devoid of any olfactory pleasure.

"So he said, namely, The-one-who praises-knowledge, he said: Do you smell of myrrh? Do not enter the House of Life. Stinking bulls are the ones who are in [it (?)]."

Smell of a lower-class house

It is a hot summer day and a peasant arrives home sweating after working hard in the field. He does not have a bath in his house, thus he needs a remedy for stench. 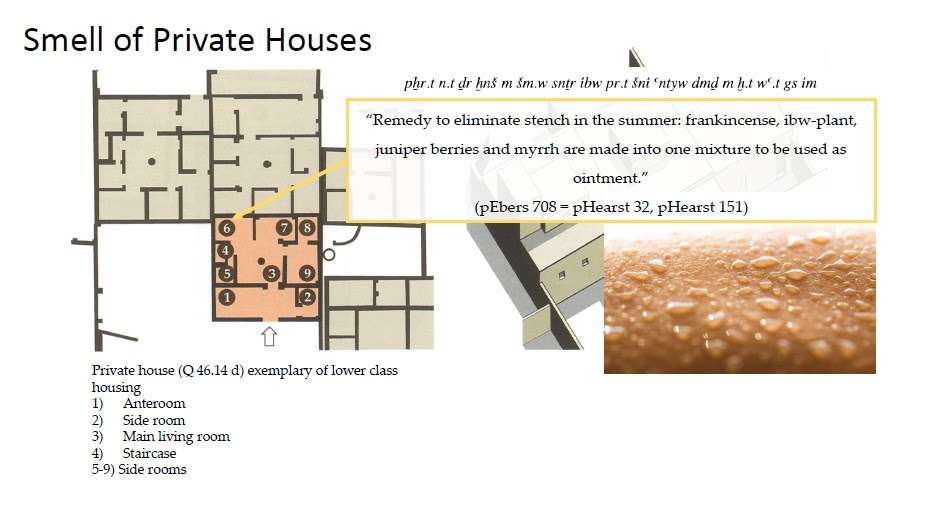 While the peasant is preparing the remedy, his wife is trying to breastfeed their newborn. However, her milk has gone bad and it stinks like fish. 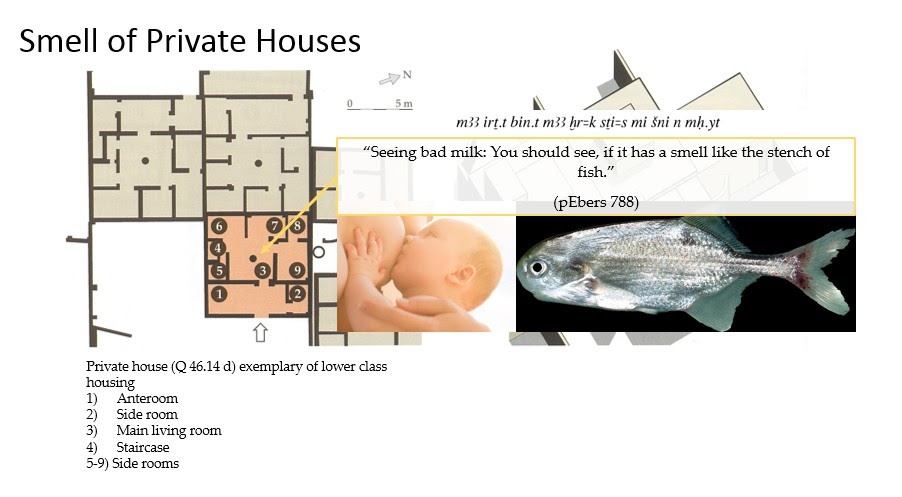 Smell of an upper-class house

A lady of a noble family is burning kyphi (a form of incense) in her living quarters to make the smell of her rooms and clothing pleasant. 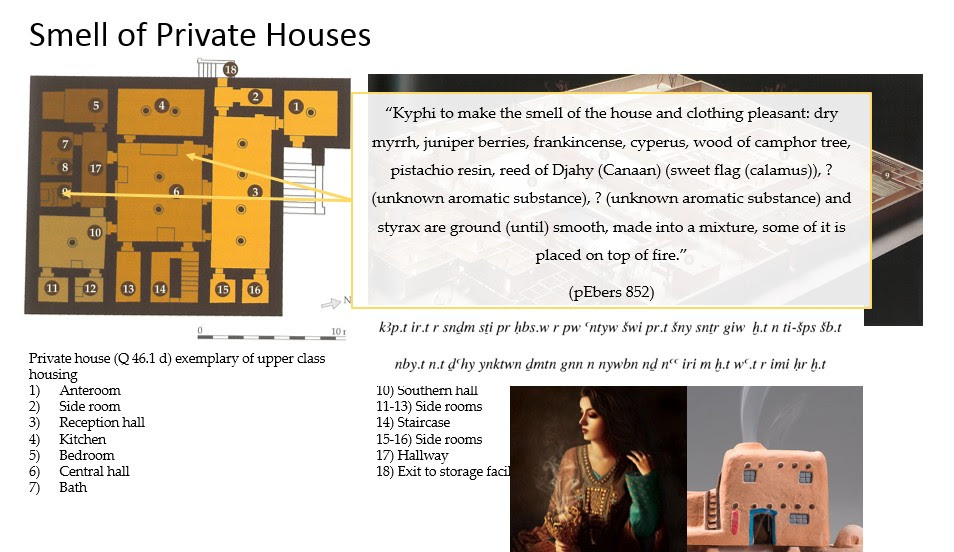 Later, she goes out to the garden to meet her lover. She takes a bath in the pool in front of him in robes permeated with scented oil. 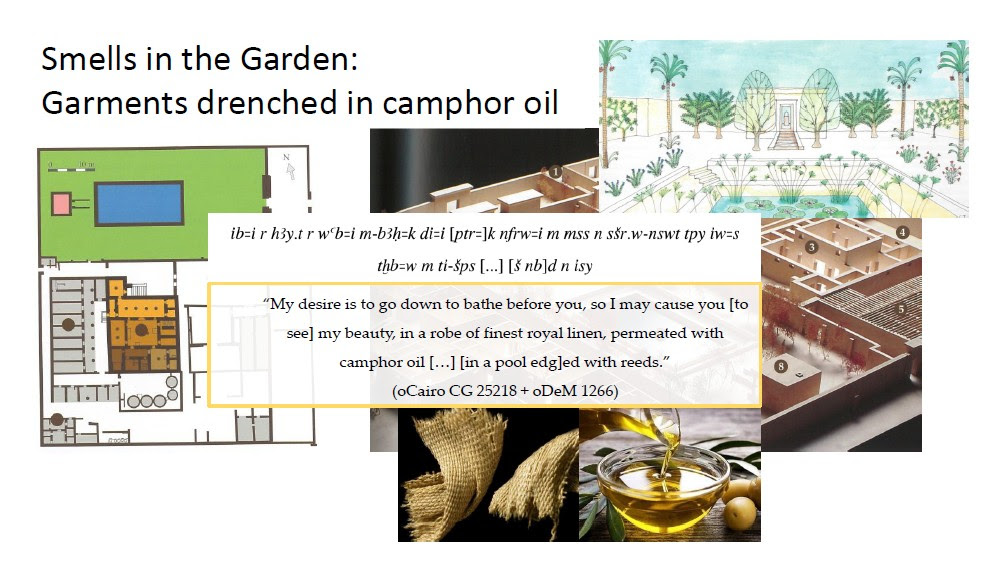 Smell of a high-class house during a banquet

A high official is hosting a banquet at his residence. Upon arrival, the guests are anointed with perfume oils, an unguent cone is placed on their head with a lotus flower in the front, and a floral garland is hung on their chest. The guests smell heavenly and are ready to celebrate. 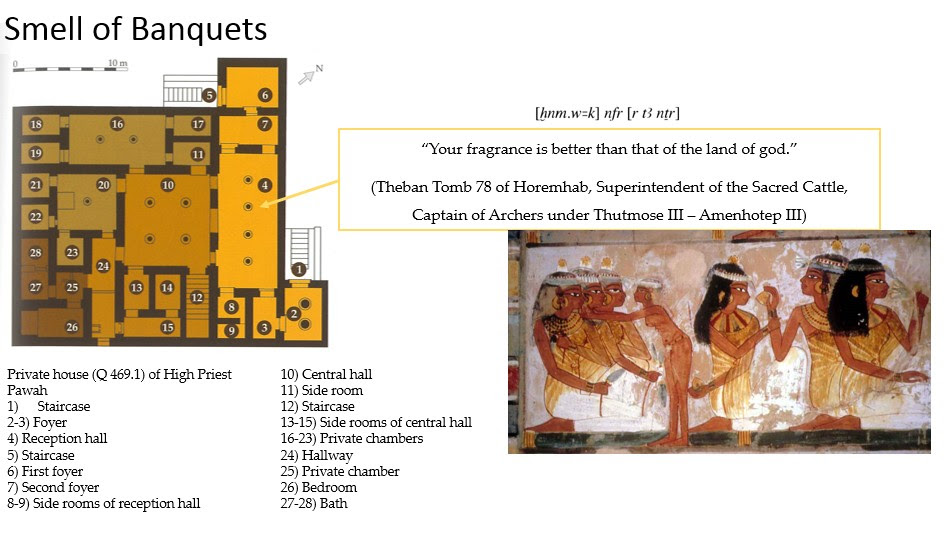 Smell of the streets

A scribe leaves the banquet drunk. He is wandering from street to street and he stinks of beer. 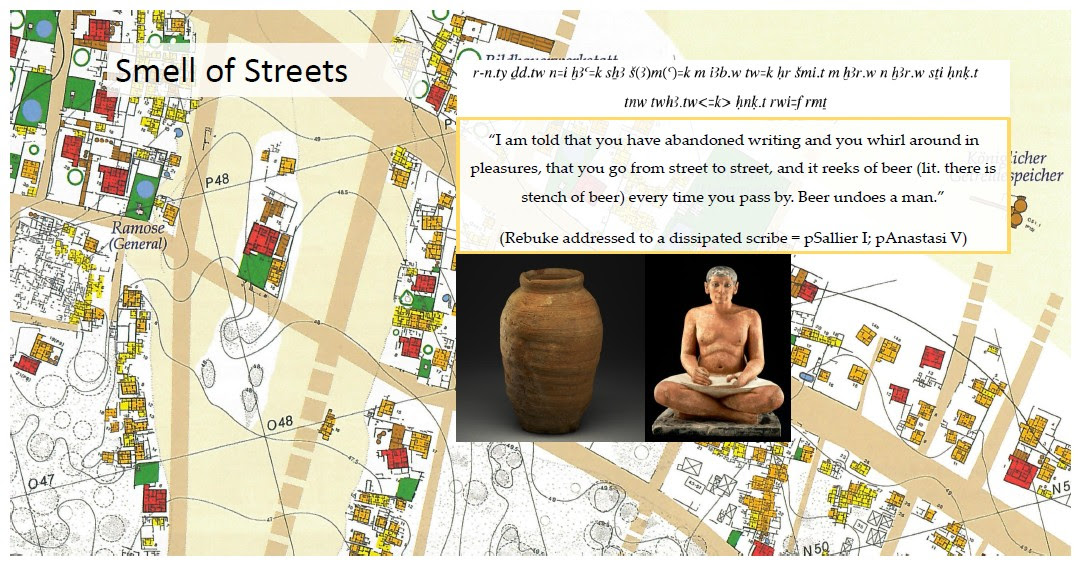 Smell of a tanning workshop

While the more fortunate are celebrating, on the outskirts of the city, a sandal-maker is hard at work mixing tan to soften hides, which he will use to make sandals.

"The sandal-maker mixes tan, his odor is penetrating."

(All Occupations Are Bad Except That of the Scribe)

Smell of a smith's workshop

A smith in close proximity to the sandal-maker is making weapons on royal demand for an impeding battle. 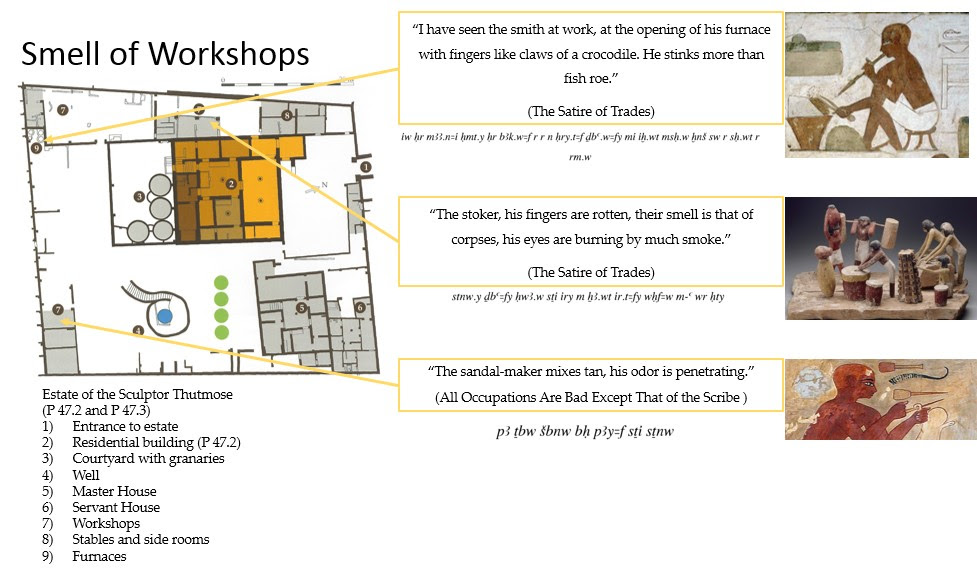 Dora Goldsmith is a PhD student of Egyptology at the Freie Universität Berlin. Her PhD project is "The Archaeology of Smell in Ancient Egypt. A Cultural Anthropological Study Based on Written Sources".