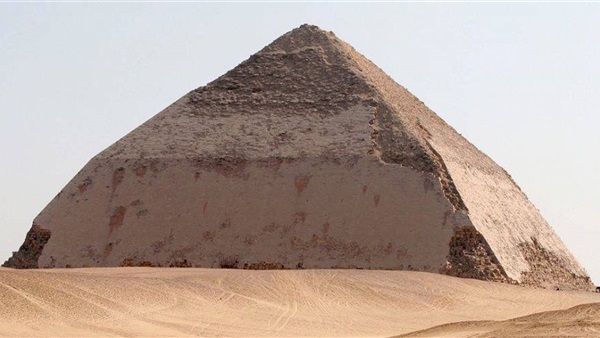 Egypt's Ministry of Antiquities will organize the opening ceremony of the Bent Pyramid of the Pharaoh King Sneferu in Giza's Dahshur archaeology area on Friday, followed by the announcement of a new archaeological discovery.

The Bent Pyramid was one of the three pyramids built by King Sneferu. Its construction took about 14 years, and the pyramid rises from the desert at a 58-degree inclination, but the top section (above 47 meters) is built at the shallower angle of 55 degrees, lending the pyramid its very obvious 'bent' appearance.

The restoration works were carried out from the base of the pyramid to a height of approximately four meters. The stones were collected from around the pyramid and returned to their original places. The joints between the stone pillars, which were destroyed due to erosion, were also restored.

King Sneferu, the first king of the Fourth Dynasty, began the construction of his colossal pyramid in Maydum, but his architect Nefermaat found that Maydum did not have enough stones to build a huge pyramid. So this pyramid became a symbolic burial ground for the king, while his residence was transferred from Maydum to Dahshur, where he began to build the pyramid known as the Bent Pyramid. When the architect found that changing the angle might hinder the burial of the king should he die suddenly, he started constructing the Northern Pyramid, but Sneferu settled on being buried inside the Bent Pyramid and then turned the Step Pyramid in Maydum into a full pyramid.