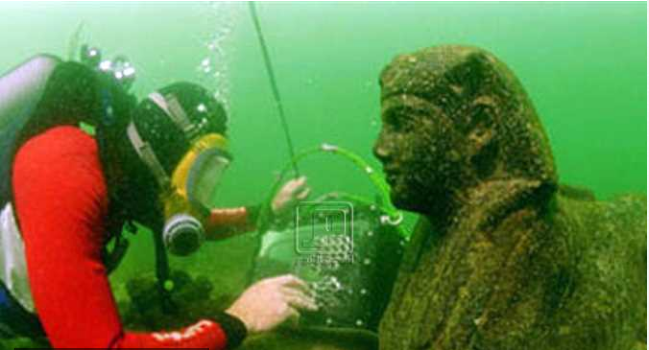 The Egyptian-European Archaeological Mission of the European Institute for Underwater Archaeology concluded its archaeological season at the ruins of the ancient Greek cities Heraklieon and East Canopus in Abi Qir Bay, Alexandria. The mission had been operating for almost two months.

Ehab Fahmy, head of the Central Department of Sunken Antiquities, said that the mission used the latest scanning devices to capture images of archaeological remains buried beneath the seabed.

A group of buildings within Canopus were found, extending the explored parameters of the city to the south for a distance of a kilometer. The mission found: remains of a port and a collection of pottery from the Late Period of ancient Egypt; gold, bronze and other metal coins as well as jewelry from the Ptolemaic period; and gold coins from the Byzantine era, which showed that the city was likely to have been populated between the 4th century BC and the Islamic era, Fahmy said Monday.

The mission found part of a completely destroyed temple in the ruins of Heraklieon, pottery vessels and tableware from the third and second centuries BC, bronze coins from the reign of King Ptolemy II, and fragments of columns found at a depth of three meters below the seabed.

Minister of Antiquities Khaled al-Anani inspected the Grand Egyptian Museum project proceedings on Monday, also inspecting the transfer of the great sarcophagus of King Tutankhamun to the restoration lab affiliated with the Ministry as the ministry prepares for the sarcophagus' restoration.

The restoration process will be the first on the material since the discovery of King Tut's tomb in November 1922. The sarcophagus will be displayed beside King Tut's other coffins at the Grand Egyptian Museum after its inauguration in the fourth quarter of 2020.

Anani also witnessed the transfer of ten pieces of wood from the King Khufu Ship during his visit to the Grand Egyptian Museum. The total number of wooden pieces transferred from the boat to the museum so far stands at 852 pieces.