Archaeologists and microbiologists from the Israel Antiquities Authority and four Israeli universities teamed up to study yeast colonies found in microscopic pores in pottery fragments.

The shards were found at Egyptian, Philistine and Judean archaeological sites in Israel spanning from 3,000 BC to the 4th century BC. 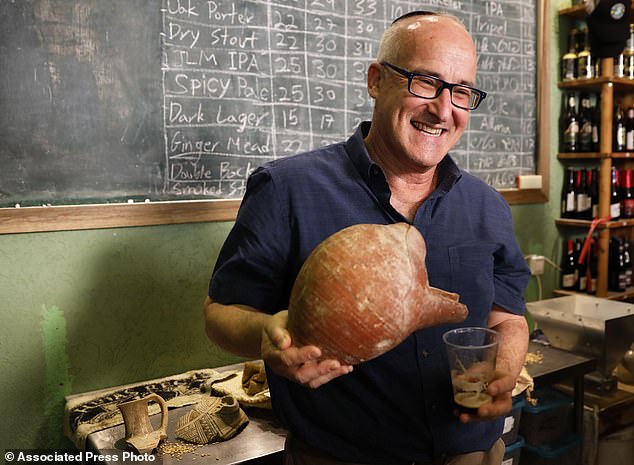 The scientists are touting the brews made from 'resurrected' yeasts as an important step in experimental archaeology, a field that seeks to reconstruct the past in order to better understand the flavor of the ancient world.

'What we discovered was that yeast can actually survive for a very, very long time without food,' said Hebrew University microbiologist Michael Klutstein.

'Today we are able to salvage all these living organisms that live inside the nanopores and to revive them and study their properties.'

Beer was a staple of the daily diet for the people of ancient Egypt and Mesopotamia.

Early Egyptian texts refer to a variety of different brews, including 'iron beer,' 'friend's beer,' and 'beer of the protector.'

The yeast samples came from nearly two dozen ceramic vessels found in excavations around the country, including a salvage dig in central Tel Aviv, a Persian-era palace in southern Jerusalem and 'En Besor, a 5,000-year-old Egyptian brewery near Israel's border with the Gaza Strip. 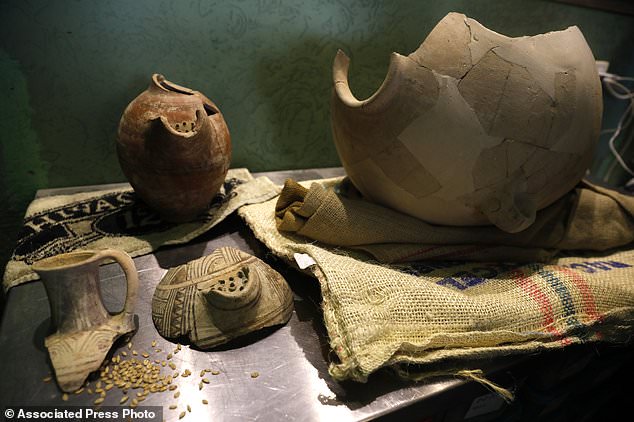 The yeast samples came from nearly two dozen ceramic vessels found in excavations, including a salvage dig in central Tel Aviv, a Persian-era palace in southern Jerusalem and 'En Besor, a 5,000-year-old Egyptian brewery near Israel's border with the Gaza Strip 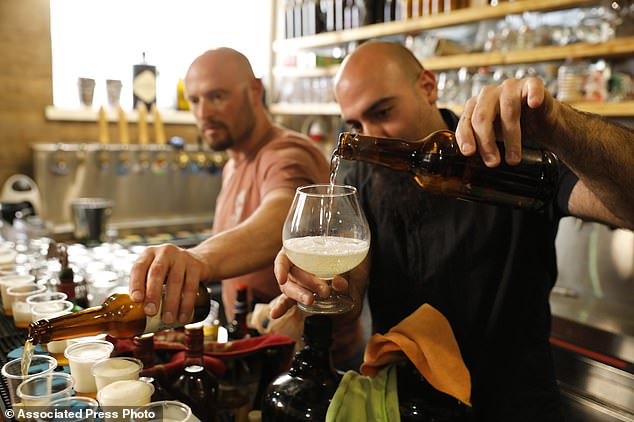 Other researchers of ancient beers, such as University of Pennsylvania archaeologist Patrick McGovern, have concocted drinks based on ancient recipes and residue analysis of ceramics.

But the Israeli scientists say this is the first time fermented drinks have been made from revived ancient yeasts.

He likened the revival of long-dormant yeast to the resurrection of ancient beasts fictionalized in Jurassic Park, but only to a point.

'It opens up a whole new field of the possibility that perhaps other microorganisms survived as well, and you can identify foods such as cheese, wine, pickles,' opening a portal into tasting cultures of the past, he said. 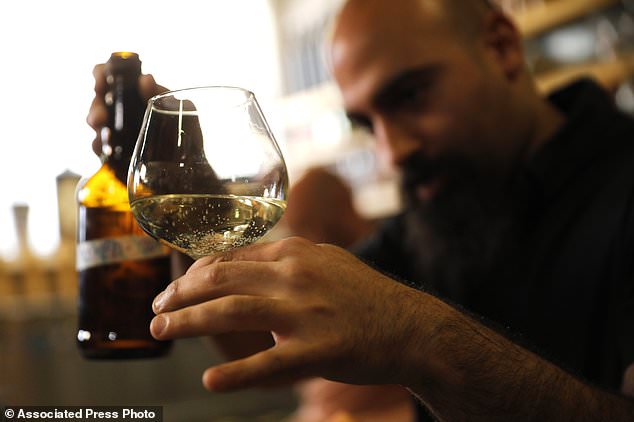 Other researchers of ancient beers, such as University of Pennsylvania archaeologist Patrick McGovern, have concocted drinks based on ancient recipes and residue analysis of ceramics

WHEN DID HUMANS START DRINKING BEER?

Humans have had a long history of consuming alcohol.

It is believed the primitive cultures of Mesopotania could have been brewing malted barley scraps as far back as 10,000BC but there are no records of it.

The earliest proof of beer-drinking dates back to Northern China 9,000 years ago.

This ancient brew was made using hawthorn fruit, Chinese wild grapes, rice and honey, and is the oldest known fermented beverage in history - older even than wine.

The earliest proof of beer-drinking dates back to Northern China 9,000 years ago

To make it the corn was milled and moistened in the maker's mouth to convert starches in the corn into fermentable sugars - before it was 'spat' into the beer.

Throughout history, the consumption of alcohol may have helped people become more creative, advancing the development of language, art and religion.

This is because alcohol lowers inhibitions and makes people feel more spiritual.

It is believed the Egyptians started brewing beer around 5,000BC, according to the papyrus scrolls.

They were brewing things like dates, pomegranates and other indigenous herbs.

At around 3150 BC, the Egyptians used industrial-scale breweries to provide beer for the workers who built the pyramids of Giza.

Eventually beer made its way from the Middle East to Europe where an abundance of barley crops provided lots of raw ingredient for brewers.

Experts have now found evidence of brewing in Greece during the Bronze Age.

Researchers believe that these prehistoric people enjoyed getting merry with alcoholic drinks for feasts all year-round and not just when the grapes were ripe.

Not only was it considered nutritional it was also a safe alternative to drinking water.

It was in the Middle Ages that malted barley became the main source of fermented sugar and beer became the beverage we are familiar with today.

For this initial experiment, the team paired up with a Jerusalem craft brewer to make a basic modern-style ale using yeast extracted from the pots.

The ale had a thick white head, with a caramel color and a distinctly funky nose.

The mead, made using yeast extracted from a vessel found in the ruins of a palace near Jerusalem that contained honey wine roughly 2,400 years ago, was champagne bubbly and dry, with a hint of green apple.

The beer incorporates modern ingredients, like hops, that were not available in the ancient Middle East - but it's the revived yeast that provides much of the flavor.

'We tried to recreate some of the old flavors that people in this area were consuming hundreds and thousands of years ago,' said Shmuel Naky, a craft brewer from the Jerusalem Beer Center, who helped produce the beer and mead. 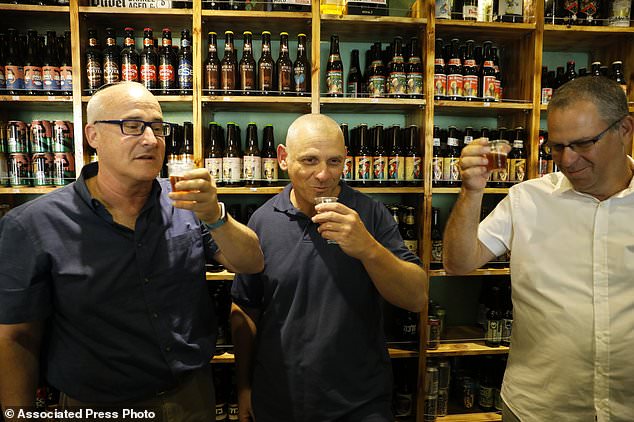 Yeasts, he said, 'have a very crucial impact on flavor.'

Naky described the beer as 'spicy, and somewhat fruity, and it's very complex in flavor,' all attributes produced by the ancient yeast.

Genome sequencing of the yeast colonies extracted from the pots showed that the ancient strain of yeast was different from the yeast used in beer-making today, but similar to those still used to make traditional Zimbabwean beer and Ethiopian tej, a type of honey wine.

The researchers said their next aim is to pair the resurrected yeasts with ancient beer recipes to better reproduce drinks from antiquity.