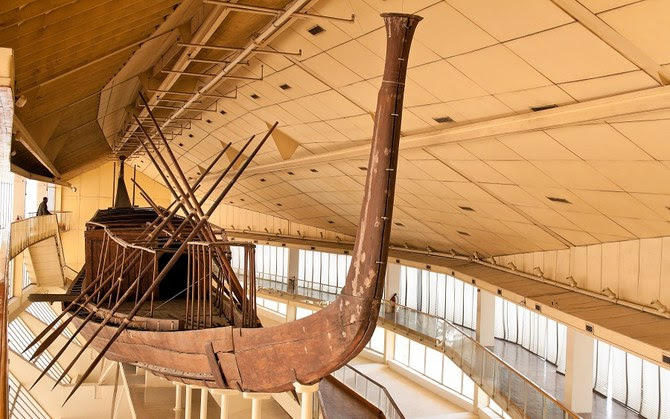 DUBAI: Today's Google Doodle marks the 65th anniversary of the discovery of the Khufu Ship, one of the world's oldest and largest boats, found in Egypt.

The ship, now preserved in the Giza Solar Boat Museum, is believed to have been built for Khufu, the second pharaoh of the fourth dynasty of the Old Kingdom of Egypt, who is entombed inside the Great Pyramid of Giza.

Unearthed in 1954 by archeologist Kamal El-Mallakh, remnants of the massive ship were found buried under a stone wall on the south side of the pyramid.

Over 1,200 pieces were reassembled by the Egyptian Department of Antiquities in order to restore the 143-feet long, 19.6-feet wide vessel. The whole process took over a decade to finish.

It's still unclear what the ship was originally intended for – some experts say it was used to transport Khufu's remains to his final resting place, while others believe it was placed at the location to transport him to the afterlife, according to Ancient Egyptian tradition.

Some experts suggested that the ship might contain clues to the construction of the pyramids, which still causes debate among scholars.