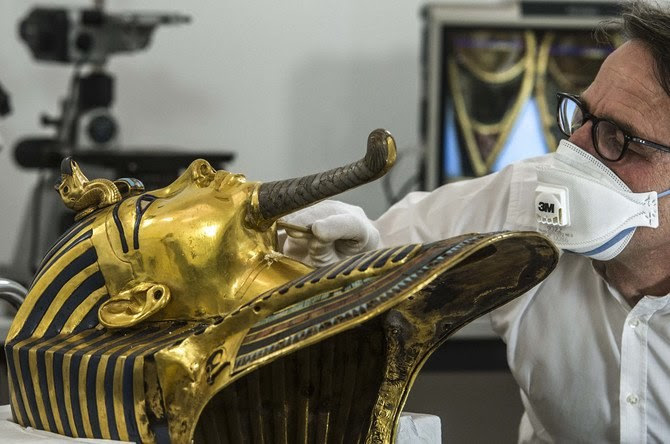 German specialists in restoration work on antiquities in glass and metal Christian Eckmann works on the restoration process of the golden mask of Tutankhamun at the Egyptian Museum in Cairo. (File/AFP)
Aya Zain
94

CAIRO: Visitors to the world's largest museum devoted to one civilization will be able to view never-before-seen items belonging to Egyptian King Tutankhamun, thanks to the latest technology.

The Grand Egyptian Museum (GEM), due to open in late 2020, is to use holographic displays to exhibit hundreds of objects excavated from the ancient pharaoh's tomb.

Many of the priceless relics have never been put on public show, and GEM will be dedicating two giant galleries to the life of the boy king.

Egyptian Tourism Minister Rania Al-Mashat announced the major exhibition during an interview on the Extra News channel and said King Tut's famous mask would be taking center stage among the vast array of items on display.

Since the 1922 excavation of Tutankhamun's tomb by renowned British archaeologist Howard Carter, only some of the thousands of objects found there have been on public display. It took experts eight years to empty the burial chamber.

"We decided to focus on quality, not quantity," said Al-Mashat, adding that GEM, which is situated at the edge of the pyramids of Giza, had taken a "unique" approach to promoting the exhibits.

It is not the first time Egypt has turned to hologram technology. Last month the technique was used at a concert starring the late iconic singer Abdel Halim Hafez.

"While the culture is not always viewed as the most technological, Egypt currently has some of the best examples of technology out there. It's crazy to see the advancements."

Each of the 7,000 square-meter galleries that GEM is dedicating to Tutankhamun will take visitors on a journey, explaining how the young king ate, dressed and lived. The holograms of his treasured items will be seen within the two exhibition halls.

When completed, the museum will be one of the biggest in the world, exclusively showing snippets into the ancient Egyptian civilization.

An estimated 100,000 artifacts from different dynasties of ancient Egypt will be on display, with around 20,000 on show to the public for the first time.