Can inequality only be fixed by war, revolution or plague? - Open Future

Can inequality only be fixed by war, revolution or plague?

A book excerpt and interview with Walter Scheidel, author of "The Great Leveler" 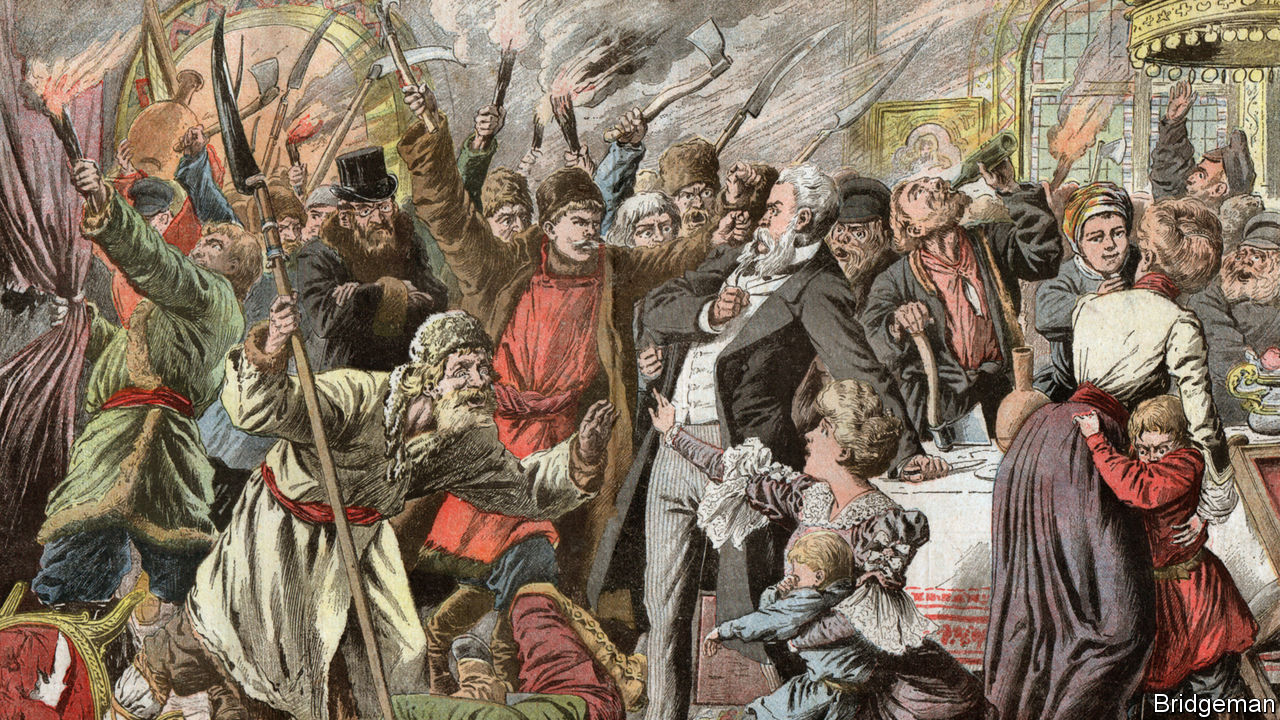 IN AN age of widening inequality, Walter Scheidel believes he has cracked the code on how to overcome it. In "The Great Leveler", the Stanford professor posits that throughout history, economic inequality has only been rectified by one of the "Four Horsemen of Leveling": warfare, revolution, state collapse and plague.

So are liberal democracies doomed to a repeat of the pattern that saw the gilded age give way to a breakdown of society? Or can they legislate a way out of the ominous cycle of brutal inequality and potential violence?

"For more substantial levelling to occur, the established order needs to be shaken up," he says. "The greater the shock to the system, the easier it becomes to reduce privilege at the top." Yet nothing is inevitable, and Mr Scheidel urges that society become "more creative" in devising policies that can be implemented. The Economist's Open Future initiative asked Mr Scheidel to reply to five questions. An excerpt from the book appears thereafter.

The Economist: Is society incapable of tackling income inequality peacefully?

Walter Scheidel: No, but history shows that there are limits. There is a big difference between maintaining existing arrangements that successfully check inequality—Scandinavia is a good example—and significantly reducing it. The latter requires real change and that is always much harder to do: think of America or Britain, not to mention Brazil, China or India. The modern welfare state does a reasonably good job of compensating for inequality before taxes and transfers. However for more substantial levelling to occur, the established order needs to be shaken up: the greater the shock to the system, the easier it becomes to reduce privilege at the top.

The Economist: Haven't liberal democracy and capitalism tackled inequality in lots of areas if you look at it with the right frame, from LBJ's Great Society to Deng's economic reforms?

Walter Scheidel: Democracies have certainly made some progress in addressing various types of inequality: consider gender, race and disability. In America, transfer programmes from the New Deal to the Great Society managed to mitigate income inequality. But all that has since been reversed. China's economic reforms since the 1980s have actually greatly increased inequality as a by-product of rapid economic growth. Capitalism is a great means of making the poor less poor, but it also continues to make the rich richer still.

The Economist: Are we really living in an unfathomable period of wealth inequality—or was the relatively equal society that followed the second world war the real aberration?

Walter Scheidel: When we view history over the long run we can see that this experience was certainly a novelty. We now know that modernisation as such does not reliably reduce inequality. Many things had to come together to make this happen, such as very high income and estate taxes, strong labour unions, and intrusive regulations and controls. Since the 1980s, liberalisation and globalisation have allowed inequality to rise again. Even so, wealth concentration in Europe is nowhere near as high as it was a century ago. America, meanwhile, is getting there—which shows that it all depends on where you look.

The Economist: If equality can only come about by war, revolution, state-collapse or plague, then is there an argument that we should simply learn to adapt to a new gilded age?

Walter Scheidel: No, but we need to appreciate that measures that worked well in the past may have done so because they were taken in the unique context of massive violent shocks and threats: the world wars and communism. This requires us to be more creative in dealing with inequality. Above all we must think harder about feasibility. It is not enough for economists to come up with recipes to reduce inequality, we also need to figure out how to implement them in an environment that is politically polarised and economically globalised. Both factors limit our scope for intervention.

The Economist: How do artificial intelligence and automation fit in to your thinking? Will they be a calamity for employment and thus for equality? Or might they unleash extraordinary productivity and improvements in living standards that actually narrow inequality?

Walter Scheidel: Ideally we would like education to keep up with technological change to make sure workers have the skills they need to face this challenge. But in practice there will always be losers, and even basic-income schemes can take us only so far. At the end of the day, someone owns the robots. As long as the capitalist world system is in place, it is hard to see how even huge productivity gains from greater automation would benefit society evenly instead of funnelling even more income and wealth to those who are in the best position to pocket these gains.

There was always one Big Reason behind every known episode of substantial leveling. There was one Big Reason why John D. Rockefeller was an entire order of magnitude richer in real terms than his richest compatriots one and two generations later, why the Britain of Downton Abbey gave way to a society known for universal free healthcare and powerful labor unions, why in industrialized nations around the globe the gap between rich and poor was so much smaller in the third quarter of the twentieth century than it had been at its beginning – and, indeed, why a hundred generations earlier ancient Spartans and Athenians had embraced ideals of equality and sought to put them into practice. There was one Big Reason why by the 1950s the Chinese village of Zhangghuangcun had come to boast a perfectly egalitarian distribution of farmland; one Big Reason why the high and mighty of Lower Egypt 3,000 years ago had to bury their dead with hand-me-downs or in shoddily manufactured coffins, why the remnants of the Roman aristocracy lined up for handouts from the pope and the successors of Maya chiefs subsisted on the same diet as hoi polloi; and one Big Reason why humble farmhands in Byzantine and early Islamic Egypt and carpenters in late medieval England and hired workers in early modern Mexico earned more and ate better than their peers before or after. These Big Reasons were not all the same, but they shared one common root: massive and violent disruptions of the established order. Across recorded history, the periodic compressions of inequality brought about by mass mobilization warfare, transformative revolution, state failure, and pandemics have invariably dwarfed any known instances of equalization by entirely peaceful means.

History does not determine the future. Maybe modernity really is different. In the very long run, it may well turn out to be. It may put us on a trajectory toward singularity, a point at which all human beings merge into a globally interconnected hybrid body-machine super-organism and no longer have to worry about inequality. Or perhaps technological advances will instead take inequalities to new extremes by separating a biomechatronically and genetically enhanced elite from ordinary mortals, the latter perpetually kept at bay by the ever more superior capabilities of their overlords. Or, just as likely, none of the above – we may be moving toward outcomes we cannot even yet conceive. But science fiction takes us only so far. For the time being, we are stuck with the minds and bodies we have and with the institutions they have created. This suggests that the prospects of future leveling are poor. It will be a challenge for the social democracies of continental Europe to maintain and adjust elaborate systems of high taxation and extensive redistribution or for the richest democracies of Asia to preserve their unusually equitable allocation of pretax incomes to stem the rising tide of inequality, which can grow only stronger as ongoing globalization and unprecedented demographic transformations add to the pressure. It is doubtful whether they will manage to hold the line: inequality has been inching up everywhere, a trend that undeniably works against the status quo. And if the stabilization of existing distributions of income and wealth will be increasingly difficult to achieve, any attempt to render them more equitable necessarily faces even bigger obstacles.

For thousands of years, history has alternated between long stretches of rising or high and stable inequality interspersed with violent compressions. For six or seven decades from 1914 to the 1970s or 1980s, both the world's rich economies and those countries that had fallen to communist regimes experi­enced some of most intense leveling in recorded history. Since then, much of the world has entered what could become the next long stretch – a return to persistent capital accumulation and income concentration. If history is anything to go by, peaceful policy reform may well prove unequal to the growing challenges ahead. But what of the alternatives? All of us who prize greater economic equality would do well to remember that with the rarest of exceptions, it was only ever brought forth in sorrow. Be careful what you wish for.

Excerpted from "The Great Leveler: Violence and the History of Inequality from the Stone Age to the Twenty-First Century". Copyright © 2017 by Walter Scheidel. Used with permission of Princeton University Press. All rights reserved.