An Inside Look: Egypt’s Legends Told through Textiles | The Knight News 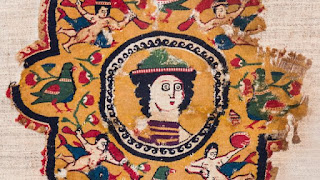 An Inside Look: Egypt's Legends Told through Textiles

The Godwin-Ternbach Museum came out with it's newest exquisite exhibition titled "From From The
Desert To The City: The Journey of Late Ancient Textiles," located right on campus in Klapper Hall.
Free of charge and open to anyone who ventures into Klapper Hall, the museum itself covers two
floors within the building, with each floor covered in rich history of the Egyptians from remnants
of textiles and art.

"From From The Desert To The City," is an amazing way to discover what went on in the lives of
Egyptians from the 4th to 7th century, by seeing all the lure and religious ties carefully woven
through cloth. The exhibit features paintings, crocheted pieces, and a main attraction of textiles,
with several pieces located in the museum each with an interesting backstory explaining and how the
works of art came to be.

Although each piece of textile looks different, each falls under a common theme of the museum—the
color purple. During the curation of these pieces in ancient Egypt, purple was an expensive dye and
was often considered to be the color of power and royalty, the dye itself was derived from certain
mollusks and was of such value, it was worth the same as silver in ancient times.

Because of the expense of it, purple textiles were associated with those in power and was only used
by the elite. Ancient Egypt placed a high importance on status, believing pharaohs were divine and
to be buried in elaborate tombs within pyramids. Although Egypt believed in their own gods and
goddesses while in its prime, when conquered by the Greco-Romans, Egyptians adopted the more modern
European religion. This was evident in many of the textiles that originated from Egypt, which
depicted Greco-Roman gods, specifically Bacchus, the Roman god of madness, wine, theatre, and
celebration —otherwise known as Dionysus in Greek mythology. Bacchus, along with his associations
were reflected in many of the textiles at the exhibit,  depicting people nude and dancing, reveling
in festivities held during those times.

The purple band of the Bacchic Dancer was one of the most impressive pieces of textile in the
museum, featuring a clear connection to Bacchus with depictions of vines and grapes and the color
purple. The piece also featured hidden meaning, perhaps intended to bring about a deeper
appreciation for the Egyptian culture, with common nude figures, however including both female and
male genitals, providing a more androgynous and ambiguous appearance. This is an even deeper
connection to Bacchus, as he was often depicted wearing feminine clothing and often had sexually
ambiguous features. This was a subtle and more complex connection which is illustrated through the
details within the textile.

The exhibit also featured the interesting piece of a preserved tunic from Ancient Egypt. This is a
piece of fashion history kept since the fifth century, featuring a tightly woven design, with
embroidery and patterns detailed to precision. The tunic itself revealing how remarkable fashion has
evolved through the centuries, along with the standard of dress those in ancient times held.

Walking into ""From From The Desert To The City," one is instantly transported back in time to get a
feel of how people communicated through artwork and fashion. If one has the time is interested in
learning more about Egyptian history, visit Klapper Hall to learn about the culture through art. The
exhibit runs from September 13th to December 13th and is well worth the trip.