Accompanying this article is a photo of Dr. Hawass looking at one of the artifacts from KV 63, discovered by Otto Schaden's team around 2006. The late Dr. Schaden is shown in the background of this photo. Glenn

Egyptology is not only a search for knowledge — it can also be great fun, writes Zahi Hawass. 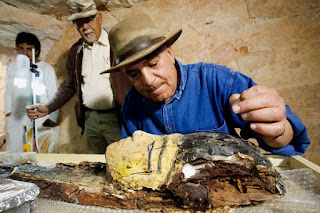