The Four Sons of Horus: Egypt's Most Popular Boy Band!

Part of a series of posts by the 2017-18 students taking the course CLE343: Supernatural Beings and Demons of Ancient Egypt / CL-M79 Ancient Egyptian Demons led by Dr. Kasia Szpakowska at Swansea University

Okay so they're not actually a boy band. I lied.

I know what you're thinking. How cool can any demon be if they're being compared to a boy band? Well don't you worry, because if The Four Sons of Horus were indeed a boy band then the world would be a much happier and cooler place and all other boy bands would have to disband.

What did they do?
The Four Sons of Horus were the bodyguards of the dead in a way. Their job was to protect the most important organs of a deceased person, so that people could enjoy being dead just as much as they enjoyed being alive. A pretty demanding job when you think about it, defending the guts of everyone in the afterlife for all eternity, right?

What did they look like?
They are most commonly depicted as canopic jars, which look like this: 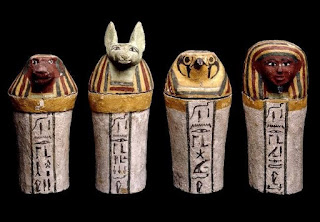 These jars would physically hold the organs in an embalming solution to preserve them so they wouldn't quickly decompose and leave the deceased absent of the organs. While this is their most common depiction, the Four Sons have also been shown as amulets: 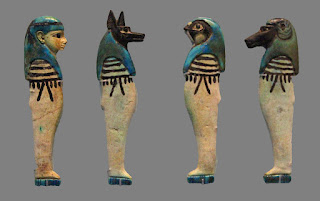 Amulets were used when the process of mummification altered for a time in later dynasties — instead of the organs being removed completely, they were taken out, wrapped and then returned to the body. The amulets were sewn into the wrappings so that the Sons could continue their protection.

Who were they?
They were the sons of Horus the Elder, a form of the god Horus, one of the most significant primordial deities of ancient Egypt. Like boy bands, the four are pretty much inseparable, and almost never shown apart from one another, but each one has their own characteristics and own specific organ to protect!

The Sensitive One
First up we have Imsety, the only human-headed member of the group. He's responsible for the liver, which the Egyptians believed to be the seat of all emotion and thought, so of course it's a pretty necessary organ for the afterlife. Some Egyptologists think that Imsety was featured as human rather than animal because emotion was a purely human characteristic. 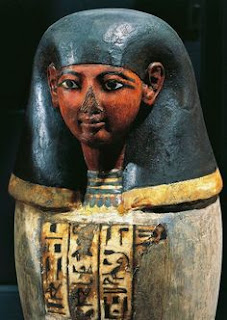 The Sporty One
Now we're getting into the animals. Hapi is a baboon-headed protector who protected the lungs, because we all want to be able to breathe in the afterlife. He's been associated with navigation because a hieroglyph in his name is connected with steering a boat, but spells in the Coffin Texts have been known to call him a 'runner' instead. 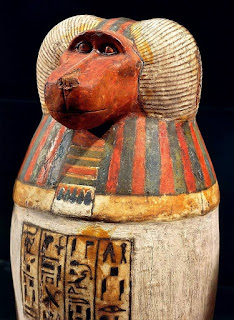 The Bad Boy
Duamutef is our jackal-headed bad boy! Most likely to be the boy band break-away, Duamutef was responsible for the stomach and not only was he protected by a war goddess called Neith, he was the only one of the group to develop his own cult. However like many boy band break-aways, Duamutef's solo career didn't come to much fruition outside of the core group: his cult was never particularly significant and Duamutef never rose to much by himself. 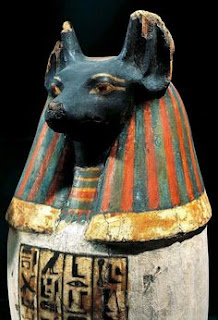 The Smart One
Finally we come to Qebehsenuef, falcon-headed and guardian of the intestines. In ancient texts it was said that he was responsible for assembling Osiris' limbs and bones when the god was cut into pieces by Set. 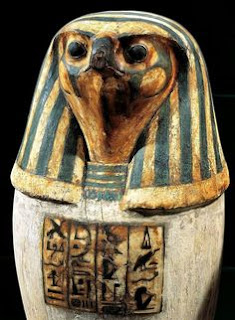 And there you have it. The coolest boy band there could ever be. They offer us a wealth of physical evidence for the funerary processes across the span of Egyptian history, consistently featured across the span of millennia, a rare achievement in the changing landscape that was ancient Egypt. Because of their protective ways, the dead can find new life in the beyond, how cool is that?!

Extras!
Check out this video for a quick summary! Or for more information, look at these websites: