The alphabets at risk of extinction - BBC Future

The alphabets at risk of extinction 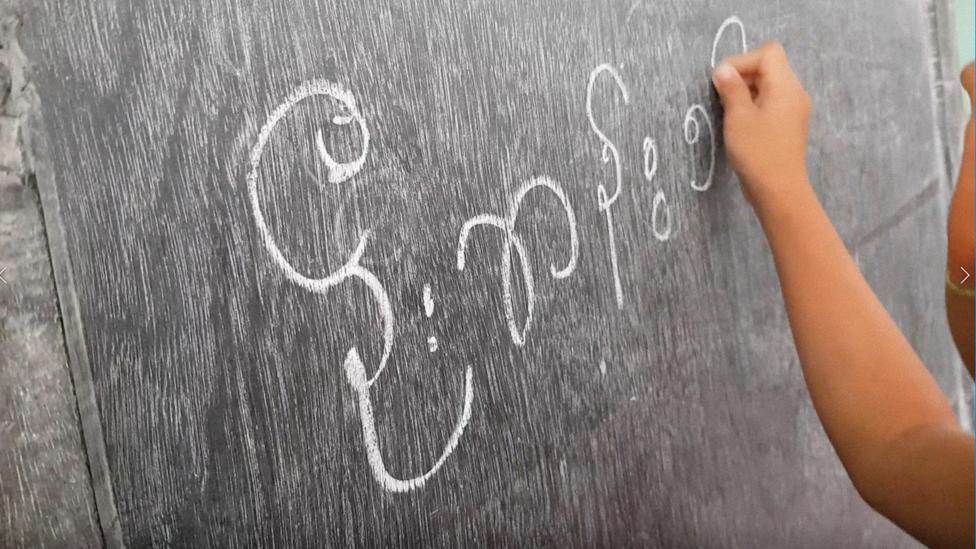 Share on FacebookShare on TwitterShare on LinkedinShare using Email

It isn't just languages that are endangered: dozens of alphabets around the world are at risk. And they could have even more to tell us.

On his first two days of school, in a village above the Bangladeshi port of Chittagong, Maung Nyeu was hit with a cane. This was not because he was naughty. It was simply that Nyeu could not understand what the teacher was saying, or what was written in his textbooks. Although 98% of Bangladeshis speak Bengali as a first language, Nyeu grew up with Marma, one of several minority tongues in the region. Written, it is all curls, like messy locks of hair.

Eventually Nyeu managed to escape this cycle of bewilderment and beatings. After learning Bengali at home, he returned to school and went to university. Now he is pursuing a doctorate at Harvard. Yet Nyeu never forgot his early schooldays. He spends much of his time in the hills where he grew up, where he founded Our Golden Hour – a nonprofit fighting to keep Marma and a flurry of other scripts alive.

You might also like:
• What is the best age to learn a foreign language?
• The key to cracking long-dead languages
• Can you lose your native language?

Along with the spoken words, something else is also at risk: each language's individual script. When we talk about "endangered languages", most of us think of the spoken versions first. But our alphabets can tell us huge amounts about the cultures they came from. Just as impressive is the length people will go to save their scripts – or invent whole new alphabets and spread them to the world.

Keep to the script

In August 2018, Unesco proudly announced that 2019 would be its year of indigenous languages. Unveiling a website devoted to the project, the organisation warned of the need to "preserve, revitalise and promote indigenous languages around the world". 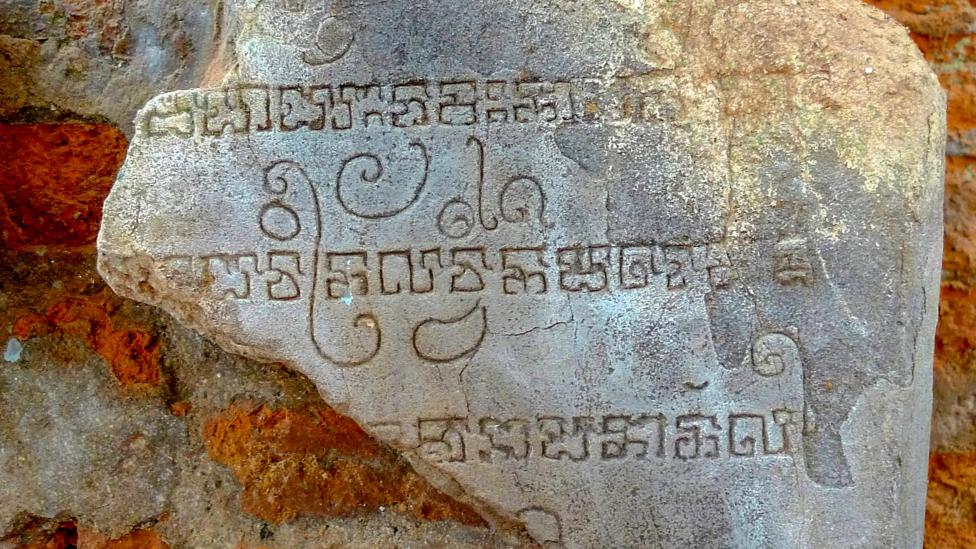 Unlike a spoken language, a written script like Cham, shown here, must be invented and actively learned (Credit: Alamy)

But while many have focused on the spoken word, how different cultures write is often ignored. This might have something to do with the artificiality of alphabets. Language is innate to all humans, but scripts have to be invented and actively learned. This has happened rarely. Even by the middle of the 19th Century, only 10% of adults knew how to write, and there are only about 140 scripts in use today.

To put it another way, suggests founder of the Endangered Alphabets Project Tim Brookes, writing can feel less vital to humanity than speaking. "Linguistics emerged with a very strong brief that said writing is an accidental byproduct of language, and the study of spoken language is really what linguistics is about," explains Brookes, who also heads up the Alphabet of Endangered Alphabets, an interactive database of endangered scripts.

Linguists agree. "Endangered alphabets and scripts just haven't been brought to people's attention in the same way as languages," says Sheena Shah, a specialist in endangered languages at London's SOAS. 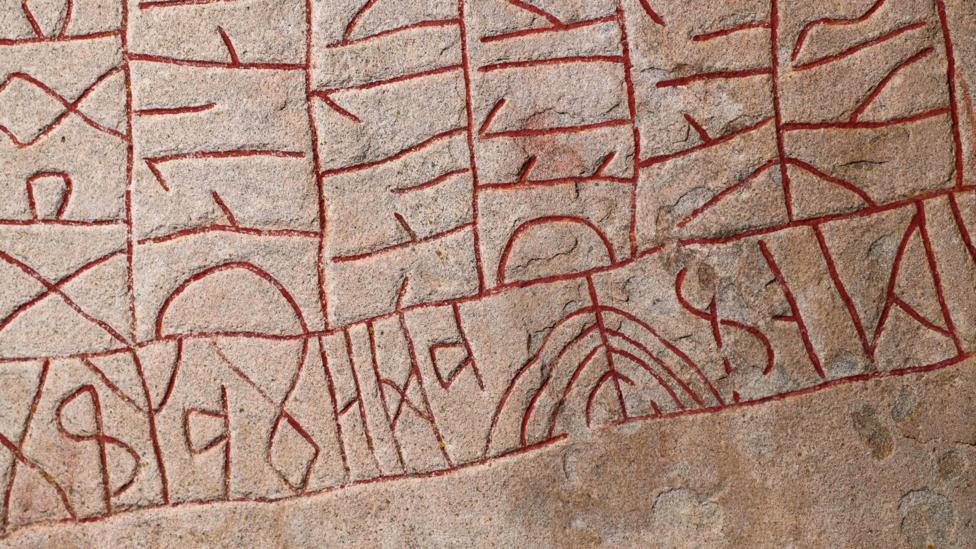 The shape of an alphabet – like the harsh downward scratches of a script like Runic – can tell us more about their culture than even a spoken language (Credit: Getty)

By their very artificiality, alphabets arguably say more about a culture than mere language. That starts with the characters themselves. For instance, the harsh downward scratches of a script like Runic speak to life in Dark Age Scandinavia: each character was painstakingly carved into rock. On the other hand, intricate scripts like Chinese could only flourish after the invention of paper.

Writing can tell us about a culture in other ways, too. Because they live in the thick forests of the Philippines, users of Hanunuo have traditionally inscribed messages into bows of bamboo. Different fonts depend on the way that scribes wield the knife. 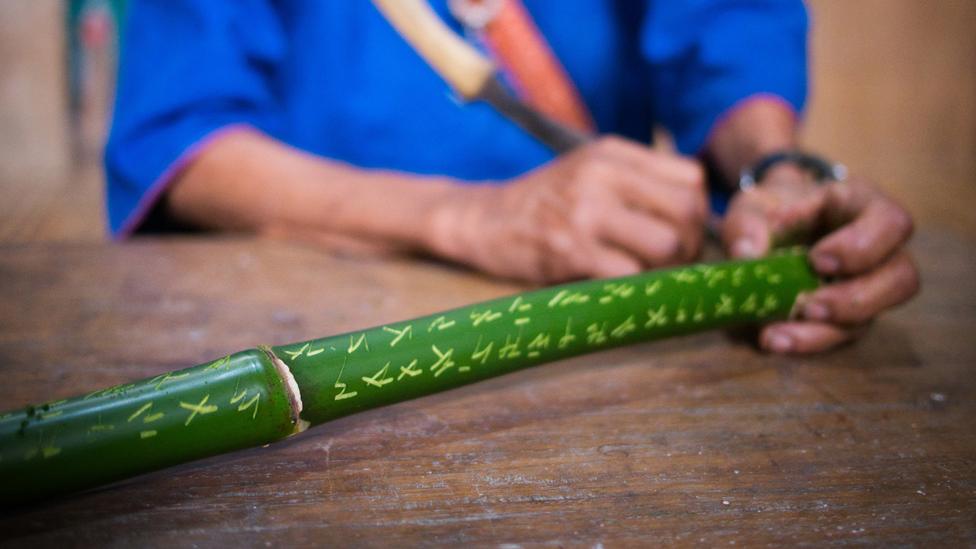 Hanunuo, an endangered alphabet used in the Philippines, is traditionally inscribed onto bamboo (Credit: Ferdz Decena)

Not that scripts are simply a means of communication. Some burrow right into the values of the people who use them, and not just because they often record sacred prayers or ancient remedies.

One striking example is the funeral rite of some Eastern Cham, an ethnic group living in southern Vietnam. Their writing is so fundamental to their identity that you literally can't die without it. Before a Cham can go to the afterlife, some believe, a priest must sit by their grave and teach them their ABCs. 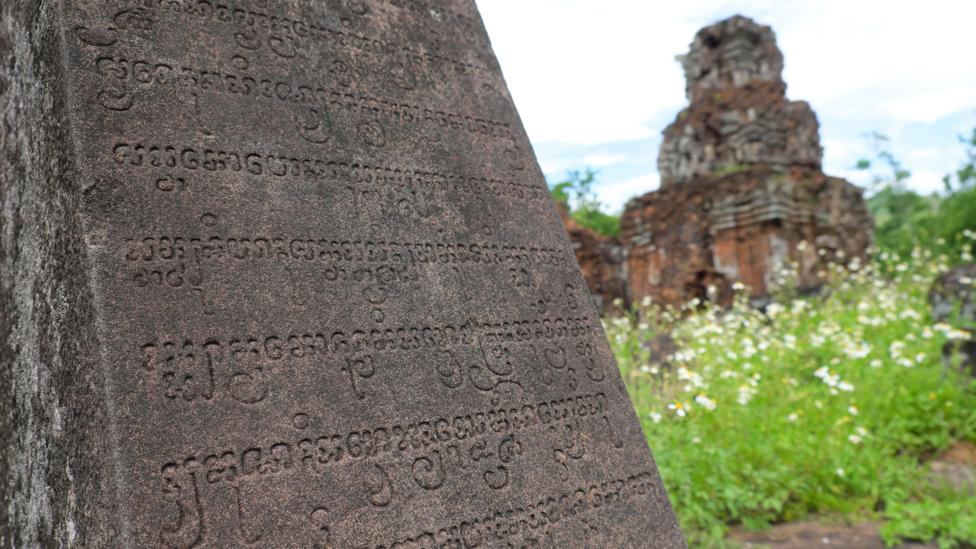 The ancient, endangered script of the Cham is so integral to their identity, they must learn it before they can go to the afterlife (Credit: Alamy)

Similar devotion exists even for alphabets stumbling towards extinction. The Coptic script – an intoxicating mix of Greek and cursive hieroglyphics – hasn't been used colloquially in Egypt since the time of the Crusades. Yet it still plays a central role in the liturgy of local Christians.

None of this surprises Shah, who says that many communities see writing as a good in itself, as a symbol of cultural identity, even if it might not be in common use.

When Kaoru Akagawa was young, she spent hours writing letters to her grandmother. Reading the responses was hard: her scrawled notes were just too messy. It was only later that Akagawa learned that her grandmother did not just have bad handwriting, but was writing in Kana, a script mostly used by Japanese women since medieval times. 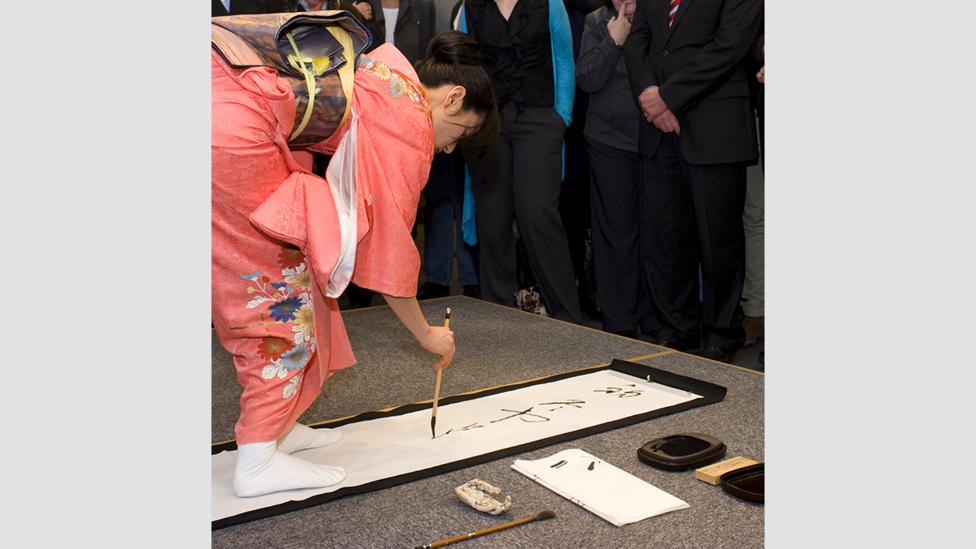 Yet as the centuries passed, and the authorities began culling what they saw as superfluous letters, over 90% of Kana characters were lost. When Akagawa started investigating the script, she remembers, "no one had heard" of Kana.

Akagawa is far from alone. From Lontara to Manchu, scripts that have endured for hundreds of years are creeping towards destruction. As the story of Kana hints, this is partly a matter of politics. Governments are often keen to enforce one script over another for nationalist reasons, even if that means stomping the competition. Take Bangladesh. After 1971, politicians chose Bengali – which had gained symbolic status during the brutal independence war against Pakistan – as the national language and alphabet. 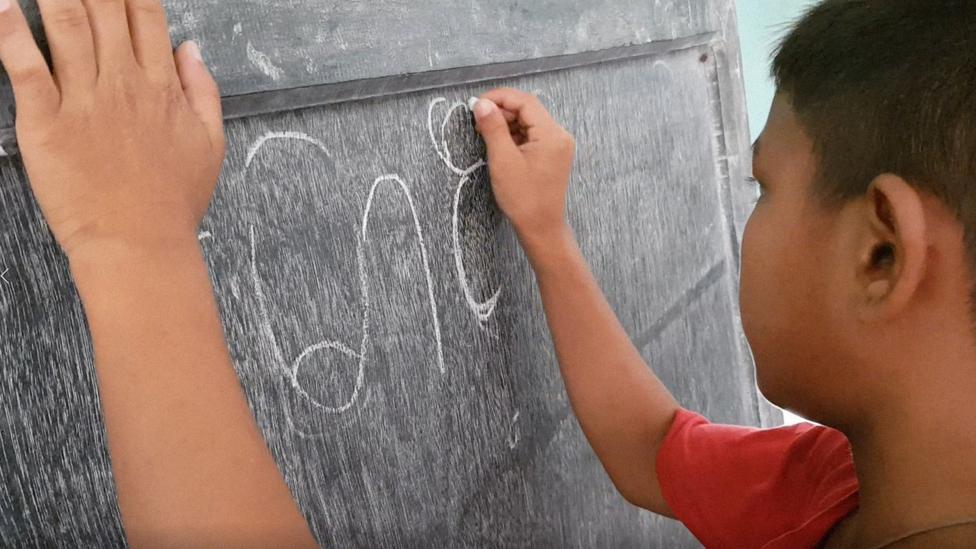 A student writes in Marma in one of Maung Nyeu's classes, which have reached more than 3,000 children (Credit: Maung Nyeu)

But, Nyeu says, elevating Bengali ravaged Marma and other minority scripts. Nowadays "very few" people in his native hills can read or write their own alphabets.

Still, with enough determination, activists can drag their alphabets to safety. Nyeu himself is an excellent example. When he began teaching, he could barely gather five students together. Now his courses attract 3,000 children who learn from charming picture books featuring winged princesses, flying elephants and dragons. This is obviously encouraging, but Nyeu is eager to stress that educating children in their native alphabets can have practical benefits too. Weaning students on their mother scripts before introducing Bengali, he says, has led to a "significant" fall in school dropout rates. 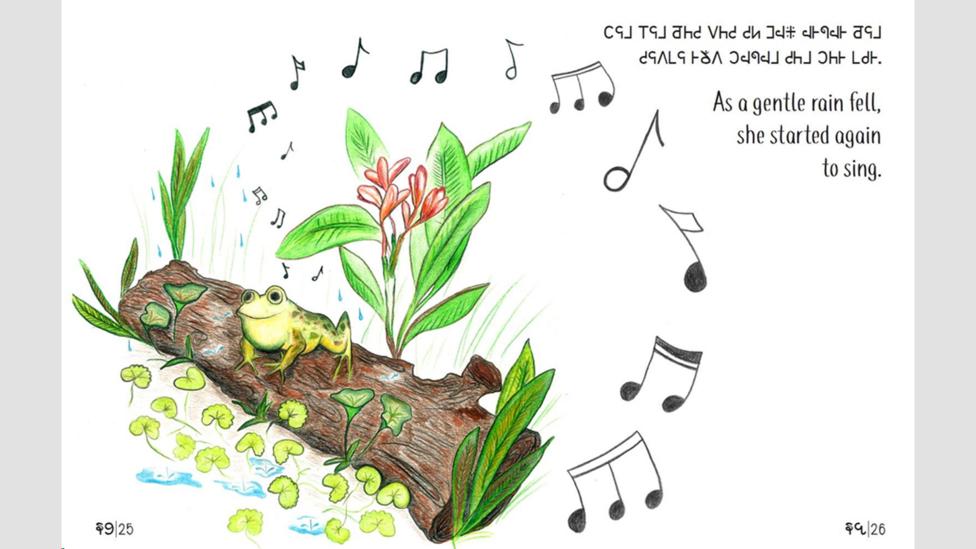 Charming picture books like this one are a centrepiece of Nyeu's classes (Credit: Our Golden Hour)

Formal research points in the same direction. A study of Inuit children educated in the Inuktitut script, for example, found that they could solve complex mental problems by second grade. Meanwhile, Inuit students taught in English or French were already falling behind their non-Inuit classmates. 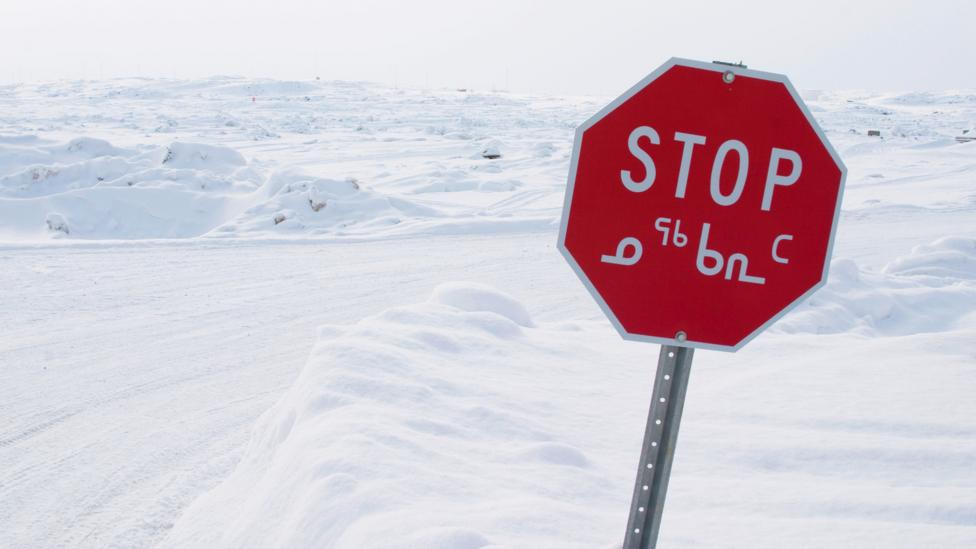 When they were educated using the Inuktitut alphabet, shown on a stop sign in Nunavut here, Inuit children were ahead of their peers taught in English or French (Credit: Alamy)

Some alphabet devotees are taking these lessons so seriously that they invent whole new scripts. One of the most spectacular examples comes from a pair of Guinean brothers, Abdoulaye and Ibrahima Barry. Tired of squashing their native Fulani tongue into the French (Latin) or Arabic alphabets, neither of which could accurately represent the range of Fulani sounds, they developed something better. The process was wonderfully unscientific: the brothers simply closed their eyes, scribbled random shapes, and refined their favourites into letters. The result was Adlam, named after the first four letters of the alphabet.

Just three decades after its invention, people use Adlam across several West African countries, and some have even used it to write books. The Barry brothers are now putting their creation online. You can now write Adlam text messages, while a Facebook group helps new learners.

Like Runic or Hanunuo, the very shape of Adlam can tug readers into the world that created it. But apart from being a lively reminder of human ingenuity – as Abdoulaye puts it, "whenever there's a need for something, there'll be someone there to come up with a solution" – its success shows why even unusual scripts are worth protecting. Because Adlam corresponds exactly to Fulani sounds, and learners avoid the muddle of studying Arabic or French first, illiterate fans can pick it up quickly. 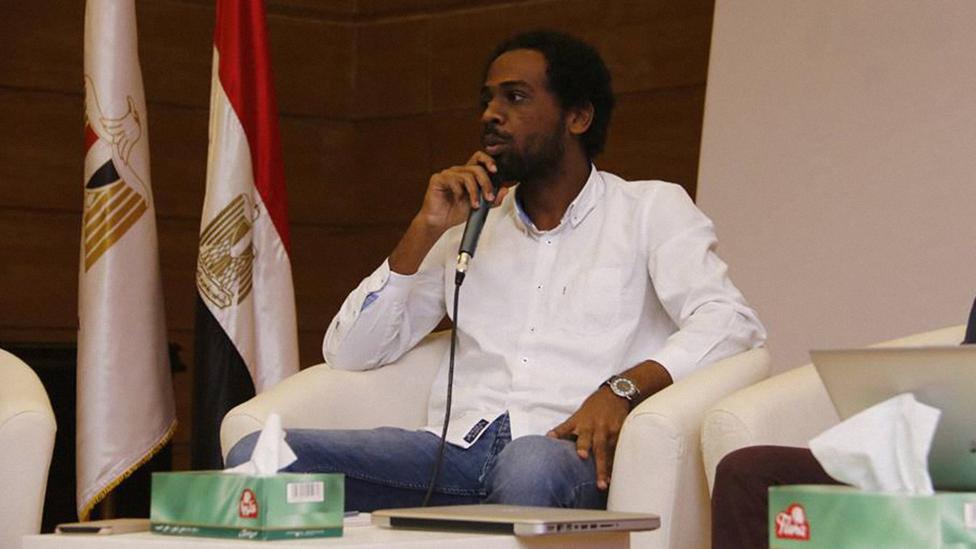 Language activist Momen Talosh has built an app to try to revive two forms of Nubian, which are spoken mainly in Egypt and Sudan (Credit: Momen Talosh)

Other activists are going digital as well. After selling his car to raise funds, Momen Talosh built an app to teach two forms of Nubian, a family of languages mainly spoken in Egypt and Sudan.

Central to his work is reviving the Old Nubian alphabet, itself related to Coptic. "This is my baby," says Talosh, who now lives in Cairo. 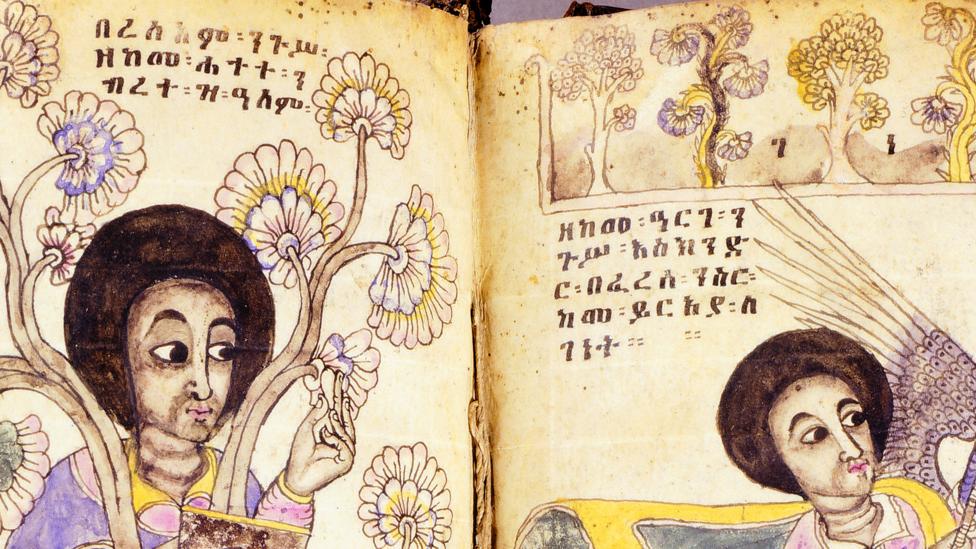 Apart from the obvious benefits of shepherding young people towards endangered alphabets, Brookes says digitising scripts might be a way of circumventing the dominance of Arabic, Latin and other major alphabets. He imagines a world where activists could write in their own alphabets and see them automatically translated for colleagues abroad. It goes without saying, Brookes adds, that all this would "really upset people in power".

What about alphabets that are just too obscure, or too repressed, to revive? We might still be able to enjoy them. Extinct alphabets can always be appreciated for the grace and inventiveness of their characters, even if no one understands what they mean. 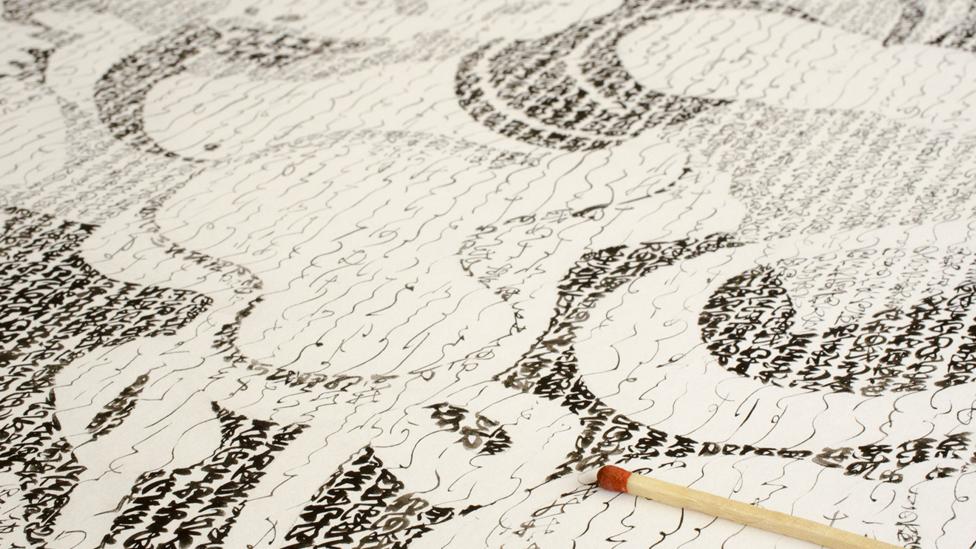 By turning Kana into an art form, Akagawa has brought the alphabet to a wider audience (Credit: Kaoru Akagawa)

Kaoru Akagawa's work is a case in point. Though few still study Kana, she brings the script to a wider audience through art. Her drawings – painting thousands of tiny Kana character to form larger images – have been displayed across Europe.

Even at the end, our alphabets can live on.