The elite woman also had two rare conditions; an extra tooth and an extra vertebra. 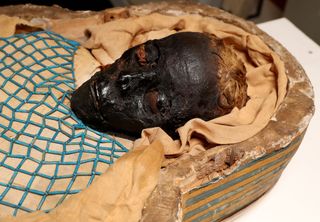 The remains of Takabuti, a woman who was murdered 2,600 years ago in Egypt.
(Image: © Ulster Museum)

It took 2,600 years to crack the case, but Egyptologists have finally determined how a curly haired, elite woman from ancient Thebes met her untimely end.

The 20-something-year-old Takabuti was murdered in a violent knife attack, researchers announced today (Jan. 27), on the 185th anniversary of the mummy's original unwrapping, in 1835, according to a statement from The University of Manchester in England.

An analysis of Takabuti's mummified remains revealed more of her secrets. She had two rare conditions; an extra tooth (33 instead of 32), and an extra vertebra, the researchers said.

Although Takabuti was from ancient Thebes (today's Luxor), her mummy got caught up in the intense Egyptian mummy trade that followed the Napoleonic Wars. When Thomas Greg, a wealthy Irish man, acquired her remains in 1834 and brought them from Egypt to Belfast, Takabuti was the first known Egyptian mummy to reach Ireland.

At the time, Egyptologist Edward Hincks deciphered the hieroglyphics on the mummy case, according to Stair na hÉireann, a site detailing Ireland's history. Hincks found that the woman had been named Takabuti and that at the time of her death she was married, in her 20s and had been the mistress of a great house in Thebes. Hincks' translations also revealed that the woman's father was a priest who served Amun, the sun god.

"There is a rich history of testing Takabuti since she was first unwrapped in Belfast in 1835," Greer Ramsey, curator of archaeology at National Museums Northern Ireland, said in a statement. In recent years, Takabuti has undergone scans with X-rays and CT (computed tomography), hair analysis, and radiocarbon dating, the latter of which showed that she lived around 660 B.C., at the end of the 25th dynasty.

The most recent tests included a DNA analysis and further CT scans. Both revealed unexpected results, the researchers said.

The DNA analysis showed that Takabuti was more genetically similar to Europeans than to modern-day Egyptians, the researchers said.

The CT scans revealed that her heart, which hadn't been located until now, was intact and perfectly preserved. These scans also disclosed her violent death: Wound marks showed that Takabuti had been stabbed in her upper back, near her left shoulder.

"It is frequently commented that she looks very peaceful lying within her coffin, but now we know that her final moments were anything but and that she died at the hand of another," Eileen Murphy, a bioarchaeologist at Queen's University Belfast's School of Natural and Built Environment, said in the statement.

In particular, the CT scans showed that "Takabuti sustained a severe wound to the back of her upper left chest wall," Dr. Robert Loynes, a retired orthopedic surgeon and honorary lecturer in The University of Manchester's KNH Centre for Biomedical Egyptology, said in the statement. "This almost certainly caused her rapid death."

The other findings are just as important, the researchers added.

"The significance of confirming [that] Takabuti's heart is present cannot be underestimated, as in ancient Egypt this organ was removed in the afterlife and weighed to decide whether or not the person had led a good life," Ramsey said. "If it was too heavy, it was eaten by the demon Ammit and your journey to the afterlife would fail."

The new analyses also shed light on life in Egypt during the 25th dynasty, said Rosalie David, an Egyptologist at The University of Manchester. "This study adds to our understanding of not only Takabuti, but also wider historical context of the times in which she lived: The surprising and important discovery of her European heritage throws some fascinating light on a significant turning point in Egypt's history," David said in the statement.

The research team — which includes scientists from National Museums Northern Ireland, The University of Manchester, Queen's University Belfast and Kingsbridge Private Hospital — is now writing a book about its findings.

The public can see Takabuti's mummy for free in the ancient Egypt gallery in the Ulster Museum in Northern Ireland.