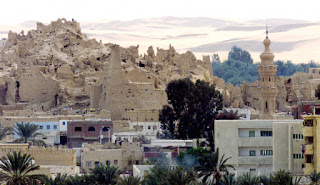 A view showing the remains of Shali castle in the old city of Siwa, Feb. 4, 2002. (photo by REUTERS/Aladin Abdel Naby)

The Siwa Oasis is located 820 kilometers (510 miles) from the capital, between Cairo and the Egyptian-Libyan border. The eastern gate to the Amazigh lands, it is also known as the Palm Land, called Sekht-am by the pharaohs. Its hot springs are one of the best regarded tourist destinations in the world.

Yet, what most Egyptians and visiting tourists do not know is that most of isolated Siwa, which sits at 18 meters (59 feet) below sea level, is a virgin oasis unpolluted by urbanism nor exploited by businessmen. In addition to the therapeutic sulfur-rich springs and sand baths, Siwa is also a site for cultural and archaeological tourism.

The Siwa Oasis’ indigenous people are the Berber tribes, which are scattered in several countries, from Siwa to the east, the Atlantic Ocean to the west, the Mediterranean Sea to the north and the Sahara to the south. Historically, they are North Africa’s indigenous population. Egypt’s Amazigh are concentrated at the oasis, where they number about 25,000 people.

Al-Monitor traveled to the oasis to tour the less-known attractions of Siwa. The first thing that catches the eye is the 50-meter conical Gebel al-Mawta (Arabic for "The Mountain of the Dead"). It features beehive-shaped stone tombs from the 26 pharaonic and Ptolemaic dynasties and a mixture of pharaonic and Greek designs.

On the southern outskirts of the oasis, on the opposite side of Gebel al Mawta, stands Gebel Dakrour (Dakrour Mountain). It is renowned for the healing qualities of its hot sands, a destination for sufferers of rheumatism, arthritis, skin diseases, and joint and spinal pain. The sand baths are packed with these visitors in June, July and August.

Cleopatra’s Bath, called the Spring of the Sun by the historian Herodotus, is just south of the Siwa Oasis. This is where Queen Cleopatra was said to have swum during her visits to the oasis. The natural hot spring pool has been lined with stones. It naturally refills itself and the overflow irrigates 840 square kilometers (324 square miles) of cultivated land.

Most of the tourist attractions and the majority of the population of the oasis are scattered in its outskirts, except for a tiny village at the center of Siwa. It hosts a number of shops, government and administrative bodies and a small transportation station. Tourists can rent bicycles or three-wheelers to get around inside the oasis.

On the way back to the village from Cleopatra’s Bath lie the remains of the Temple of Amun, also known as the Temple of Umm Ubayda, on the palm-lined asphalt road. It is the temple where Alexander the Great is said to have consulted Amun in 331 B.C., asking whether he would rule the world.

The Temple of Amun, built by Nectanebo II, was dedicated to Amun's worship. The largest part of the temple was destroyed in late 1990s, when the governor of Siwa used gunpowder to loosen its stones to build a police station, the Great Mosque and other buildings. Some stones bearing ancient inscriptions remain.

The Revelation Temple, also known as the Temple of Amun, stands nearby on Aghurmi Hill. This is where Alexander the Great is said to have been honored as an Egyptian god after he received the prophecy that he would indeed rule the world.

This temple, built by the 26th pharaonic dynasty, bears the fingerprints of four ages: the pharaonic, Greek, Roman and Islamic. It includes a mosque and a minaret, rooms for the pharaonic priests, corridors and a lobby that was built for Alexander the Great’s coronation and reception, a sacred well and Roman walls. It is divided into pharaonic, Ptolemaic and Islamic sections.

The top of the pharaonic section of the temple is decorated with Siwa Oasis scenes, including houses, saltwater lakes and surrounding green palm trees. On top of the minaret, in the Islamic section, there are depictions of other monuments, mountains, lakes and palms.

In the village lie the remains of the Shali castle, which was built by the people of the oasis in the 12th century to counter attacks by Arab and Bedouin tribes. It was made of kerchief, which is a saline stone found in saltwater and mud lakes. The castle was destroyed in the 13th century, and its ruins have since been worn away by rainfall and occasional floods.

Fatnis Island, also known as the Fantasy Island, is located 12 kilometers from the town, in the western part of the oasis. Surrounded by saltwater lakes and palm trees, it is a favorite place to swim for residents and visitors and boasts the most magical sunset in Egypt.

Safari adventures abound in the Siwa oasis. The Great Sand Sea covers more than 72,000 square kilometers and is home to the world's third-largest sand dunes. One of them, at 140 kilometers high, is considered one of the world's best sites for sandboarding.

Those exhausted by traveling in the desert will regain their energy in the Great Sand Sea's natural hot spring Bir Wahed, where the water is hot throughout the year, and at a lake that is always cold.

An area of 7,800 kilometers of the Siwa Oasis’ total 55,000 kilometers was declared an open nature reserve in 2002 to protect the cultural and animal diversity, many lakes and more than 1,000 springs. The area is also home to olive groves and palm tree gardens containing nearly 300,000 palm trees, 70,000 olive trees and fruit orchards. Limited types of other crops are cultivated there.

All these treasures make Siwa Oasis a top destination for tourists looking for everything from a peaceful nature adventure to natural therapy. 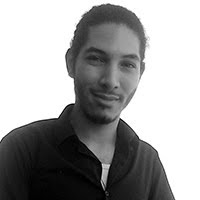 Omar al-Naghy is a journalist and media researcher. He worked at several newspapers and news websites, including al-Masri al-Yaum, Addustour and Masrawy, in addition to working as editorial secretary at Etfarag.com.