Pulling the front lock of hair in Ancient Egypt?

In Ancient Egypt groups of common mourners walked during funerary processions making many gestures of lament: raising arms, beating their arms…One of the most typical gestures of these mourners was to pull from their lock of hair.

We can watch this typical mourning movement in two dimensional depictions, as for instance the mastaba of Mereruka (Saqqara) or the tomb of Ramses IX (KV6).

However, there is an exception. The wooden anthropoid coffin of Amenemipet, from the XXI Dynasty, presents in its outer decoration a group of common mourners crying, bending their bodies, raising their arms… It is interesting to notice how the artist of Ancient Egypt introduced here the frontal perspective for depicting one mourner in the center of the group, so she raises her two arms at each side.

At left of the image in a smaller scale a mourning woman pulls with both hands not from a front lock of hair, but from a lateral lock of hair. Her face is depicted from a frontal point of view and maybe for that reason the artists of Ancient Egypt could draw the gesture this way. She is making the nwn m gesture, but in a different way the canonical tradition depicted. 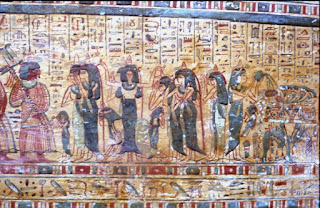 Some reflections come now to my mind: