Animal Mummies #2: Animals in the Ancient Egyptian landscape | Egypt at the Manchester Museum

Exhibitions on Ancient Egypt often favour black or beige as a way to represent either a gloomy/scary concern for death or sandy, washed-out monumental backdrops. ‘Gifts for the Gods: Animal Mummies Revealed’ challenges these notions and opens with an imagined vista of Saqqara at the beginning of the Late Period (c. 750 BC), populated with taxidermy specimens of species that might have been encountered. Contrary to many expectations, there’s a lot of greenery here. We have chosen green – the colour of new life and, importantly, the assurance of renewal after death – as the colour palette throughout the exhibition. 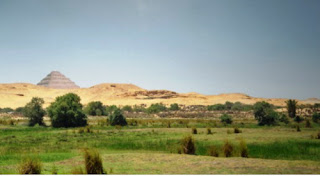 This recreated image shows the area just to the north of Saqqara, near the cultivation, is often referred to as the ‘Lake of Abusir’ and was once much marshier than it is today. This area has been suspected by Egyptologists to have been home to many ibis birds, sacred to the god Thoth, which were mummified as votive offerings to the gods. Much of this and other forms of wildlife have disappeared since ancient times.

Most of the ancient Egyptians worked on the land, and all would have had many more opportunities to observe animal behaviour than most of us do today. Since Predynastic times, the gods were shown as animals, or with animal heads, to illustrate the superhuman power of nature. The Egyptians believed that animals could pass between the worlds of humans and gods. As a result, representations of animals – pictures, statues and mummies – were used to carry messages to the gods.

The evidence of millions of animal mummies – many without a full animal inside – suggests that demand for animals for mummification outstripped supply. Were animals therefore bred specifically for mummification? It is very difficult to locate large areas of animal habitat or even the sites of animal mummy production firmly in the archaeological record – but it seems likely these areas must once have existed. They may be lost because they were close to the river and have since been built on top of or been washed away by the Nile.

Some researchers have claimed to have found evidence of force-feeding birds of prey; however, it is difficult to establish this with certainly based on a single example. Establishing evidence of intentional farming from the mummified remains is difficult, mainly because diseases common in captive populations may not have manifest themselves in the skeletal remains during the relatively short lifespans of the animals. Finding evidence for cause of death, a further aspect of the management of these votive populations, is notoriously difficult to assess using radiography when many mummies have suffered extensive post-mummification damage.

Ultimately, in the absence of archaeological or extensive evidence, our best sources of information are the mummies themselves. The use of non-invasive imaging techniques means that we can recover the maximum amount of information from them, whilst keeping them intact for future research.

Find out more at the Ancient Egyptian Animal Bio Bank