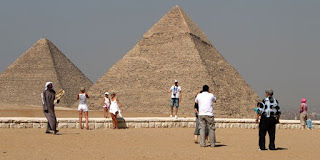 Tourists in Egypt - YOUM7 (Archive)
By THE CAIRO POST

“The Ministry aims to increase the number of visiting tourists during the coming period,” Zaazou told On My Responsibility talk show on Sada al-Balad channel, adding “I will visit the governorates of Luxor, Aswan, and Red Sea, and all tourist areas in the coming period to solve the tourism sector’s problems.”

According to the Central Agency for Public Mobilization and Statistics (CAPMAS) annual report issued in May, Egypt’s official number of tourists visiting Egypt in 2014 registered 9.9 million compared with 9.4 million tourists the previous year with an increase of by 4.4 percent.

Since the 2011 January Uprising, the tourism sector has been gravely affected as the rate of holidaymakers coming to Egypt sharply decreased. Visiting tourist number recorded 14.7 million persons during 2010 (before the revolution).

Egypt depends on tourism for around 20 percent of its hard currency and tourism revenues comprise 11.3 percent of Egypt’s gross domestic product (GDP). The sector’s total investments are valued at $9.8 billion, according to the Ministry of Tourism.