The exhibit is divided along four central themes and will usher in visitors in the most spectacular style. 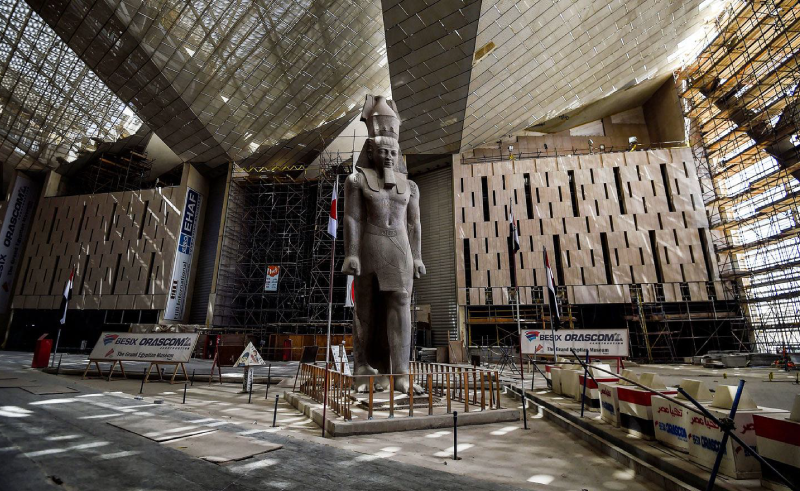 Gods, kings and doors to the underworld are just a preview of what awaits us at what will be a large exhibit set-up at the entrance to the Grand Egyptian Museum. Just yesterday, the museum was able to complete lifting and installing 42 large artefacts, mainly made up of statues, along the large staircase outside of the main entrance will showcase four themes in ancient Egypt.

The first theme, starting at the bottom of the stairs, touches on the subject of royalty with statues of kings and queens throughout history up until the Greco-Roman era. The second theme, which will be higher up on the staircase, highlights architecture in places of worship, where temples from different periods will be set up. As for the third theme, it will show the common practice of  merging of ancient gods with Pharaohs, highlighting the divine light in which rulers were seen. The fourth and final theme explores a Pharaoh's journey into the afterlife through sarcophagi, false doors that represent transcending into the underworld, and canopic jars.

The Grand Egyptian Museum is now preparing guidelines for the aesthetic presentation of the exhibit, which includes an especially customised lighting system designed to make the artefacts look that much more stunning. Statues of King Ramses II, Queen Hatshepsut and the warrior goddess, Sekhmet, are among the many artefacts that had previously been installed on the grand staircase, and with these new additions, we don't think the doors of the museum need to open at all.