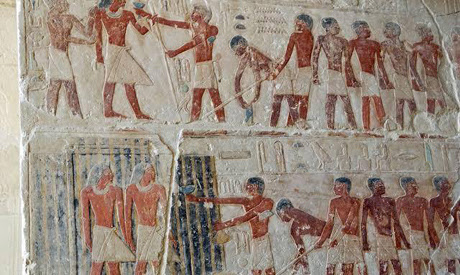 "From the walls of The Tomb of Niankhkhnum and Khnumhotep in Saqqara (Photo : Egypt's Ministry of antiquities and tourism)
The Tomb of Niankhkhnum and Khnumhotep in Saqqara  is Tuesday's virtual tour on the Ministry of Tourism and Antiquities' website and social media platforms.
The tomb is the final resting place of two men, Niankhkhnum and Khnumhotep. They were officials during the Fifth Dynasty (c.2494-2345 BC), as well as priests in the sun temple of King Nyuserra (c.2445-421 BC) in Abu Ghurab.
They were the king's hairdressers and the supervisors of his manicurists.
The tomb consists of two parts, one a free-standing structure made of limestone, and the other cut into the rock.
The tomb, discovered in 1965, contains beautiful depictions of various scenes of everyday life, but the most famous is its unique scene that shows the two men embracing.
The entrance to the tomb is adorned with two columns on which the names and titles of Niankhkhnum and Khnumhotep are inscribed.
It leads to a set of chambers with an open courtyard, which contains many scenes of everyday life including farming, hunting, the slaughtering of animals, jewellery making, and sculpting.
Short link: