The best-preserved tombs in Beni Hassan are those of Khnumhotep II, Amenemhat, Baqet III, and Kheti, the walls of which bear beautifully decorated colourful scenes Beni Hassan Necropolis in Minya
Beni Hassan is the modern name of an ancient Egyptian site, located around 20 kilometres south of Minya.

It is a necropolis formed in and around a hillside, in the upper parts of which were carved around 40 large tombs that date from the Sixth Dynasty, towards the end of the Old Kingdom, to the 12th Dynasty, during the height of the Middle Kingdom.

This is where the powerful administrators of the Oryx Nome (meaning "governorate") and their descendants were buried.

The best-preserved tombs in Beni Hassan are those of Khnumhotep II, Amenemhat, Baqet III, and Kheti, the walls of which bear beautifully decorated colourful scenes. Many other tombs, including from the Late through the Ptolemaic periods, and into the Roman Period. 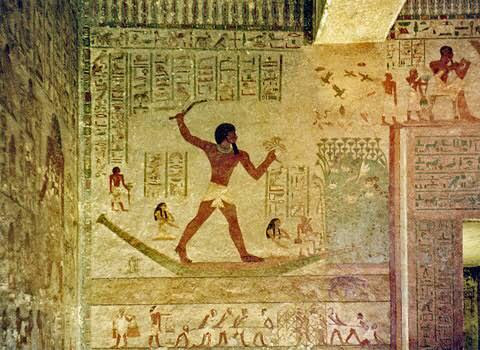 Since the beginning of April, the Egyptian tourism and antiquities ministry began launching virtual tours of some of the country's most famed museums and archaeological sites to allow visitors to view the country's ancient heritage from home.

The initiative is part of the ministry's efforts to enable people worldwide to explore and enjoy ancient Egyptian civilisation during the coronavirus outbreak.