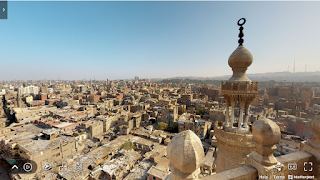 The Bab Zuwayla is a symbolic and historically invaluable Fatimid site in Cairo, but its location in a densely populated area of the city exposes it to significant risks from congestion and human activity. In 1998, the American Research Center in Egypt spearheaded an intense five-year conservation project, with support from the U.S. Agency for International Development, that revitalized the gate. Critical to this project was the removal, restoration and re-installation of Bab Zuwayla's sizable wood and iron doors. The project was led by Dr. Nairy Hampikian.

Bab Zuwayla functioned as the southern entrance to the original Fatimid settlement from A.D. 969 (when 'al-Qahirah' or 'Cairo' was founded), and was reconstructed in stone in the late eleventh century A.D. by Badr al-Gamali, the de facto ruler of Egypt. During restoration work by ARCE it was discovered that the two massive doors of the Bab Zuwayla, each weighing almost 4 tons, moved on ball bearings, which were initially placed on display in the monument following the completion of the project. Colloquially, the gate is also known as Bab al­-Mitwalli after a popular Sufi saint who is associated with the location.