The mummy was that of a teenage girl A 17th dynasty anthropoid coffin containing a mummy, along with a mud-brick offering chapel and a pile of mixed materials from funerary equipment, have been unearthed by a Spanish-Egyptian archaeological mission in Draa Abul Naga necropolis on Luxor's West Bank.

The director of the mission, José Galán, explained that these objects were unearthed during excavation work carried out in the area located in front of the open courtyard of Djehuty's tomb (TT 11).

The coffin was carefully placed on the ground horizontally. It measures 1.75 by 0.33m, and was carved in wood cut from a single sycamore tree trunk, then coated with a whitewash and painted in red.

Inside the coffin was found the mummy of a 15- or 16-year-old girl resting on her right side. The mummy is in a bad conservation condition.

The mummy is wearing two earrings in one of her ears, both with a spiral shape and coated with a thin metal leaf, maybe copper.

It also had two rings, one made of bone and the other with a blue glass bead set on a metal base and tied with string. Four necklaces tied together with a faience clip are around the chest.

One necklace is 70cm long and made rounded faience beads, alternating dark and light blue.

The second one is 62cm long, and made of green faience and glass beads.

The most beautiful is the third necklace which measures 61cm and is made of 74 pieces, combining beads of amethyst, carnelian, amber, blue glass and quartz. It includes two scarabs, one depicting the falcon god Horus, and five faience amulets. 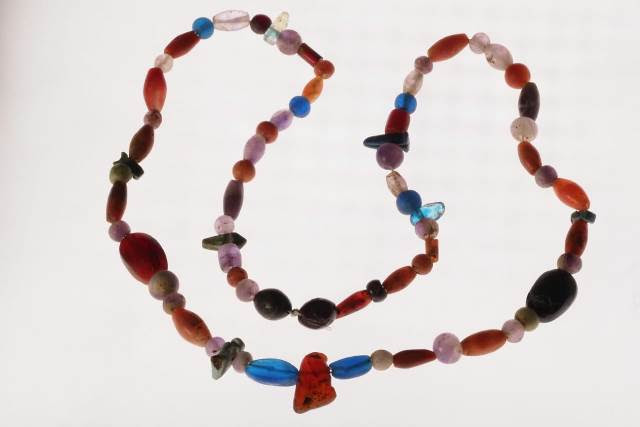 The fourth necklace is made of several strings of faience beads tied together at both ends by a ring combining all the strings.

At the opposite side of the mud-brick chapel, a small coffin made of mud was also found. It is still closed and tied together with string. 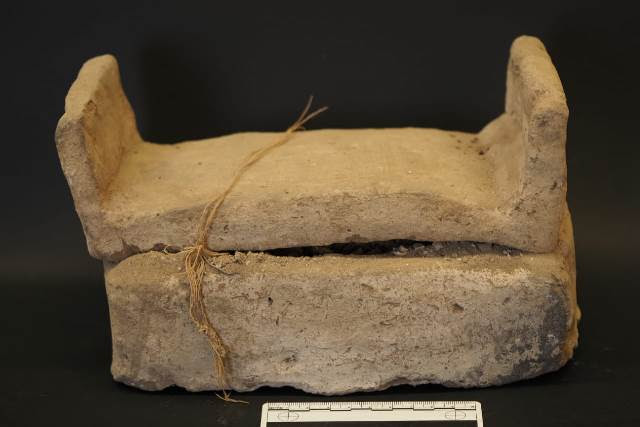 Inside there was a wooden ushabti wrapped in four linen bandages. The ushabti figurine and one of the linen bandages are labelled in hieratic text identifying its owner, "The Osiris, Djehuty," who lived under the 17th dynasty (c.1600 BCE).

"The sandals are in a good state of preservation, despite being 3,600 years old," Galán noted. He added that they are dyed in a vivid red colour, and engraved with various motifs showing god Bes, goddess Taweret, a pair of cats, an ibex and a rosette.

From their decoration and size, he said, the sandals probably belonged to a woman, and also the balls, which were used by a woman for sport or as part of a dancing choreography, according to daily life depictions in Beni Hassan tombs of the 12th dynasty.
Search Keywords: