An Afterlife So Perilous, You Needed a Guidebook - The New York Times

An Afterlife So Perilous, You Needed a Guidebook

Archaeologists unearthed the remains of a 4,000-year-old "Book of Two Ways" — a guide to the Egyptian underworld, and the earliest copy of the first illustrated book. 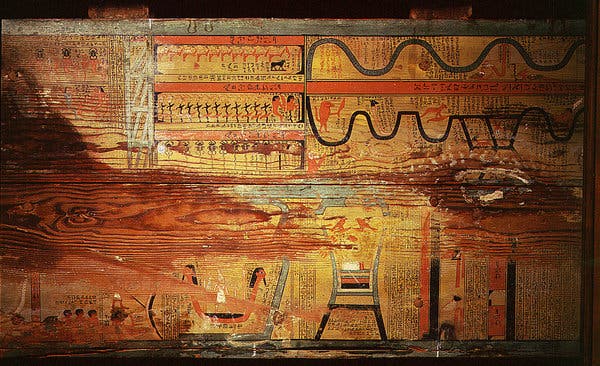 When it comes to difficult travel, no journey outside New York City's subway system rivals the ones described in "The Book of Two Ways," a mystical road map to the ancient Egyptian afterlife.

This users' guide, a precursor to the corpus of Egyptian funerary texts known as "The Book of the Dead," depicted two zigzagging paths by which, scholars long ago concluded, the soul, having left the body of the departed, could navigate the spiritual obstacle course of the Underworld and reach Rostau — the realm of Osiris, the god of death, who was himself dead. If you were lucky enough to get the go-ahead from Osiris' divine tribunal, you would become an immortal god.

"The ancient Egyptians were obsessed with life in all its forms," Rita Lucarelli, an Egyptology curator at the University of California, Berkeley, said. "Death for them was a new life."

The two journeys were a kind of purgatorial odyssey reminiscent of Dungeons & Dragons: extraordinarily arduous, and so fraught with peril that they necessitated mortuary guidebooks like "The Book of Two Ways" to accompany a person's spirit and ensure its safe passage. (The "two ways" refer to the options a soul had for navigating the Underworld: one by land, the other by water.) Among other annoyances, the deceased had to contend with demons, scorching fire and armed doorkeepers, who protected the dead body of Osiris against gods bent on preventing his rebirth, according to Harco Willems, an Egyptologist at the University of Leuven in Belgium. Success in the afterlife required an aptitude for arcane theology, a command of potent resurrection spells and incantations and a knowledge of the names not just of Underworld doorkeepers but also of door bolts and floorboards.

In a new study published in the Journal of Egyptian Archaeology, Dr. Willems detailed how a team of researchers under his direction unearthed the remains of a 4,000-year-old "Book of Two Ways" — the earliest known copy of the first illustrated book. In 2012 they reopened a long-abandoned burial shaft in the cliff-side necropolis of Deir el-Bersha, a Coptic village midway between Cairo and Luxor on the eastern side of the Nile. The site was the main cemetery for the region's governors, or nomarchs, during Egypt's Middle Kingdom, roughly 2055 to 1650 B.C.E., and boasts many elaborately decorated tombs.

The shaft that Dr. Willems investigated was one of five in the tomb complex of the nomarch Ahanakht. Twenty feet down, the researchers found the remains of a sarcophagus neglected by previous generations of archaeologists. Most of its contents had been looted or destroyed by fungi, but two rotting cedar panels turned out to be etched with images and hieroglyphs. To Dr. Willems's amazement, the fragments of text were from a "Book of Two Ways." Inscriptions found nearby referred to the reign of Pharaoh Mentuhotep II, who ruled until 2010 B.C.E. These suggest that the manual is some four decades older than any of the two dozen extant copies.

The 63-year-old Dr. Willems grew up in the Netherlands. His entry into the ancient Egyptian netherworld began at age 12, when he read Hans Baumann's "The World of The Pharoahs," an exploration of Egyptian antiquity from the point of view of a modern child. After majoring in Egyptology at Leiden University, Dr. Willems earned a Ph.D. at the University of Groningen, studying Middle Kingdom coffins. He has directed the dig at Deir el-Bersha since 2001; before that, the last time the tomb had been excavated was 86 years earlier, when it was explored by George Reisner, an American Egyptologist supported by Harvard University and the Museum of Fine Arts in Boston.

The Reisner expedition is mostly remembered for the discovery of the tomb of the provincial governor Djehutynakht, the predecessor of Ahanakht. Among the treasures unearthed: a mummified head; a headless, limbless torso; and a chapel whose portico harbored two palm-columns, a rectangular inner hall and a deep chamber. Alas, in a secondary shaft, labeled Tomb 17K85/1B, Dr. Reisner came up empty. Scanning the scattered debris — yellowing newspapers, cigarette butts — he concluded that the chamber had been thoroughly ransacked by looters. He abandoned his search after only a few feet.

Aided by Dr. Reisner's excavation diary, Dr. Willems set out to document Tomb 17K85/1B in greater detail. Suitably gloomy, dank and eerie, the shaft was like the remains of a dark forest, with hundreds of bits of cedar coffin planks spread about as if deposited by a flash flood. Given the brittleness of the 4,000-year-old wood, the excavators carefully packed up the shards for conservation back at the university in Belgium.

Wooden sarcophagi of the Middle Kingdom's grandees were primarily painted on the inside. "These 'Coffin Texts' tend to situate the deceased in the world of the gods," Dr. Willems said. "Sometimes they are combined with drawings. At Deir el-Bersha, one frequently encounters 'Books of Two Ways.'"

The images were only applied in paint, but the hieratic texts were written in black or red ink and later traced, coarsely, with a knife. Although almost all color on the planks had disappeared and only the scratches remained, Dr. Willems managed to decipher many of the faint engravings using high-resolution images and DStretch, a software tool for digital enhancement of rock art.

Since some of the planks were etched with the name Djehutynakht, Dr. Willems at first assumed the coffin had contained that governor's body. But closer inspection revealed that its occupant was actually a woman named Ankh, who appeared to have been related to an elite provincial official. Indeed, the jumble of bones found in the shaft may be hers, even though the Book refers to Ankh as "he."

"To me, what's funny is the idea that how you survive in the netherworld is expressed in male terms," Dr. Willems said. To the ancient Egyptians, creation and regeneration were solely the province of male gods. "Goddesses were believed to be protective vessels," Kara Cooney, a professor of Egyptian art and architecture at the University of California, Los Angeles, said. In the engraving, "the pronoun 'he' was essential even for female deceased people because they needed to be like Osiris."

Generally, each individual's Book differed in length and lavishness depending on its owner's wealth or status. "This one begins with a text encircled by a red line designated as 'ring of fire,'" Dr. Willems said. "The text is about the sun god passing this protective fiery ring to reach Osiris." Gates feature prominently, as do two looping lines indicating the separate roads to the afterlife, surrounded by malignant spirits and other supernatural beings. The final image shows a barque dragged on a sledge — "Spell 1128," Dr. Willems said — and follows the final text ("Spell 1130"), which yokes the dead person's identity forever to the sun god, Ra, the creator. Assuming Ankh casts her spells properly, she has become a god.