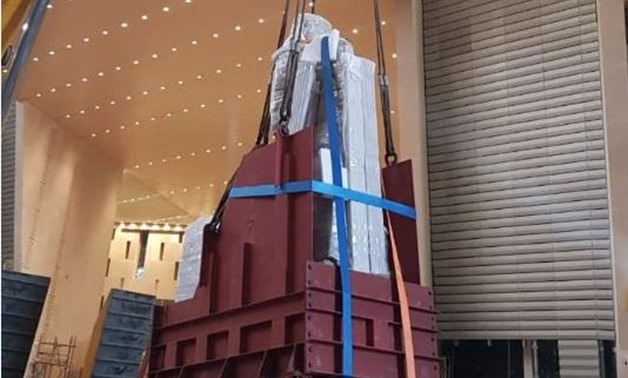 The antiquities were transferred amid high security measures - ET

The artifacts were transferred amid the tight security measures of the Tourism and Antiquities Police and the Security Forces. General Supervisor of the Grand Egyptian Museum Atef Moftah stated that some of the transferred artifacts will be placed on the Great Staircase, while other artifacts will be exhibited in different halls of the museum according to their era.

Director of Archaeological Affairs at the Grand Egyptian Museum Al-Tayeb Abbas clarified that one of the most important transferred artifacts are the statues of King Ramesses II, Sekhmet, and Seti II, and a large portrait made of pink granite of Ramses IV. This is in addition to a distinguished set of statues that convey the mastery of ancient Egyptian art.

For his part, Director General of Executive Affairs for the Restoration and Transportation of Antiquities at the Grand Egyptian Museum Essa Zidan stated that the transfer process was carried out through several stages, including 3D imaging, radar examination, and an initial restoration of some of the artifacts.

Zidan pointed out that the transportation was carried out in cooperation with the Arab Contractors Company, and under the supervision of specialists of the Grand Egyptian Museum.

Six artifacts weighing between 4 and 16 tons were among the transferred antiquities, in addition to a variety of other pieces of wood, stone and metal that were deposited in the specialized restoration laboratories.