The burial structures were looted during antiquity, but beads and a pendant depicting Hathor, an Egyptian goddess, suggest earlier trade links between Pylos, Greece, and Egypt. 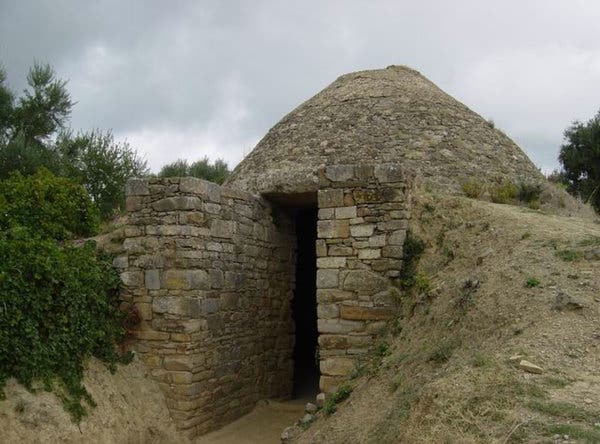 Two large tombs have been discovered and excavated at the site of the ancient city of Pylos in southern Greece, suggesting that Pylos played a surprisingly prominent role in early Mycenaean civilization.

Although the tombs had been looted in antiquity, archaeologists reported on Tuesday that they had recovered thousands of pieces of gold foil, remnants of the sheets of gold that once lined the tomb floors and would have lent a spectacular gleam to the darkened chamber.

The larger of the two tombs is 39 feet in diameter and the smaller 28 feet. Both were originally built in a beehive shape known as a tholos but had collapsed.

Archaeologists also found beads made of amber, carnelian and malachite, and a golden pendant depicting the head of the Egyptian goddess Hathor. These items suggest that Pylos, a city with a fine port, had trading connections, previously unknown, with Egypt and the Near East around 1500 B.C.E., the time the tombs were in use.

The two new tholos tombs were discovered by Jack L. Davis and Sharon R. Stocker, a husband and wife team of archaeologists at the University of Cincinnati who have been working at the site since 1992.

In 2015 they discovered a spectacular shaft grave just outside the ancient palace of Pylos. The grave's occupant was buried with a long bronze sword and a wealth of Minoan artwork, principally seal stones, of the highest quality. They named him informally as the Griffin Warrior, after a mythical beast carved on an ivory plaque in the grave.

Both the Griffin Warrior and the two tholos tombs belong on a pottery-based time scale to a period known as Late Helladic IIA, which lasted from 1600 to 1500 B.C.E., although the exact dates are disputed. The period is of critical interest because it saw the formation of the Mycenaean civilization, which lasted from around 1600 to 1200 B.C.E., when many of its major cities were burned in an unknown catastrophe.

The era of Classical Greece did not emerge until after an ensuing dark age of some 700 years.

The later Mycenaean period is the setting for Homer's epics and such heroes as Agamemnon of Mycene. The period is called the Mycenaean because Homer portrays the city's king, Agamemnon, as leader of the Greek fleet that set out to recapture Helen of Troy. Also, monumental architecture, including many tholos tombs, was excavated at Mycene in the 19th century.

The new finds at Pylos raise the question of whether the ancient city may have had a greater importance at the beginning of the Mycenaean period, maybe even more than Mycene. "We need to rethink the formation of Mycenaean civilization and the role that Pylos played in this development," Dr. Stocker said.

A central feature of Mycenaean culture is that it originated from the Minoan civilization of Crete, an island south of Greece that prospered as a trading hub in the Eastern Mediterranean between the Near East and Egypt.

The fine Minoan artifacts in the Griffin Warrior's grave could have been just loot from Crete. But Dr. Davis and Dr. Stocker believe instead that the items, even though made in Crete, were integral to the warrior's culture. The handle of a sword in his grave looks identical to one engraved on a seal stone buried with him. This and other similarities point to the warrior's people having understood the meaning and imagery on the Minoan objects buried with him.

From further study of these objects, the two archaeologists now believe the warrior had both military and priestly functions as did the king or "wanax" described in inscriptions from the later Mycenaean period. If so, he would have been one of the early kings of Pylos, possibly the first, and if so the leader of the first kingdom on the European mainland.

Thomas G. Palaima, an expert in Mycenaean writing at the University of Texas at Austin, said he agreed with the two archaeologists' interpretation of the military and religious significance of the objects in the Griffin Warrior's grave. His main reservation, he said, was whether the role of the wanax existed in this early period.

Archaeologists see the new finds at Pylos as helping to clarify the early relationship between the Minoan and Mycenaean civilizations. The elites at Pylos and Mycene were using Minoan imagery and art objects to establish their status in Greek society.

"They quickly reach agreement on what shows status — it's weapons, big-time architecture, lots of gold, and seal stones," said Jeremy B. Rutter, a Mycenaean archaeologist at Dartmouth College. The elites imported precious objects from Crete and copied the style of Minoan architecture in the palaces at Pylos and Mycenae.

"The new findings at Pylos have been magnificent and have changed the nature of the debate," Dr. Rutter said. "What is emerging as a result of these excavations and the thesis by Michael Nelson is that Pylos was a real powerhouse in the early Mycenaean period." Dr. Nelson, an archaeologist at Queens College, New York, has long argued for an early Minoan influence at Pylos.

The two University of Cincinnati archaeologists have enjoyed a double measure of luck in their excavations at Pylos. They decided in 2015 to dig near the Pylos palace site in a grove of currant grapes known as the Dimopoulos Field. But the farmer who owned the field refused to sell it. They had to switch their team to what had seemed a far less promising site. It was there, on their first day of digging, that Drs. Davis and Stocker stumbled across the grave of the Griffin Warrior.

The Dimopoulos Field became available for purchase last year after the owner died. Dr. Davis raised the large sum required with funds that had been made available by the University of Cincinnati in return for his not moving to Stanford and with a grant from the Institute for Aegean Prehistory.

Last year, Dr. Davis said: "We started the excavation and my goodness we didn't find anything. It was getting very depressing because we'd paid a fortune for the field and I didn't want to admit we'd made a mistake."

When they did find the first tholos tomb, they realized to their horror that another excavator had been at work before them, using a backhoe. They were able to date this event through an unusual artifact — a chocolate croissant wrapper with an expiration date of September 2015.

The nearby Griffin Warrior grave was being excavated at this time, and presumably inspired the digging at the tholos tomb, even though plundering antiquities is a serious offense under Greek law. Fortunately the huge stones of the tholos tomb prevented even the backhoe operator from making much progress or destroying the site's archaeological value.