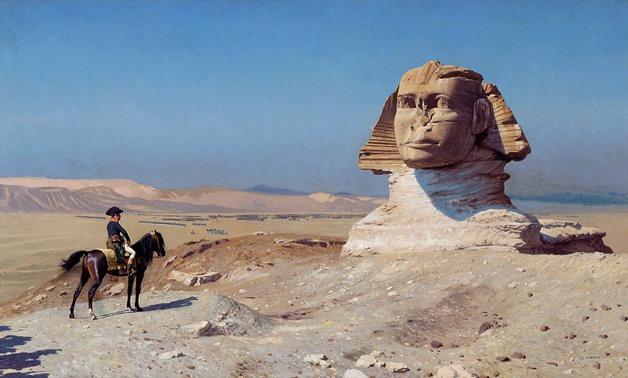 Who broke the Sphinx's nose?

CAIRO - 20 January 2018: The Sphinx is one of the historical and popular sites in Egypt. It still captivates the imaginations of people, 4,500 years after it was built.

Several stories have been created and spread, purporting to reveal who broke the Sphinx's nose. The star of those stories is Napoleon Bonaparte. It is believed that the Sphinx's nose was broken during one of the French military battles near Giza, during the French campaign in Egypt in 1798.

On Friday, "The Guardian" published new evidence that refutes Bonaparte's responsibility for damaging the statue.

The evidence is an oil painting by Danish Naval Captain and explorer Frederic Louis Norden of the Sphinx, in which the statue was painted without a nose.

Also, the newspaper added, the legendary Arab historian Al-Maqrizi documented that the Sphinx's nose has been lost since the 15th century, and he claimed that a Fatimid Sheikh (A religious man lived in the era of the Fatimid in Egypt) called Mohamed Saaem el-Dahr, was the person responsible for the disappearance of the nose.

Prominent historian and author Bassam el-Shamaa' mentioned in his book "Hokam Misr El-Qadema" (Ancient Egypt's Rulers) published in 2009, that Bonaparte is innocent, and his supposed battle was at Imbaba, far away from the Pyramids and the Sphinx.

El-Shamaa' also highlighted that Louis Norden's painting dates back to 1737 and was published and exhibited in 1744, before the French military campaign in Egypt.

He also explained that the real reason for the nose breaking is erosion features, as the rock that Sphinx was carved of is somehow a new geological stone so it could be easily affected by natural erosion such as wind, rain and other natural disasters such as earthquakes.