More photos of discovery at Al-Alamein

An Egyptian Archaeological mission working on Alamein archaeological site on the northern coastline has uncovered a rock-hewn tomb that can be dating back to the first and second centuries AD. The discovery was made during the archeological survey carried out on the infra structure project of the New city of Alamein.
Naema Sanad, General Director of Marina Antiquities site and the Head of the Mission explains that the tomb contains of a stair engraved in rock and leads to the main chamber of the tomb with walls bearing a number of burial holes called "Locauli".

She continued that the southern wall of the tomb is decorated with the a Greek religious and artistic decoration depicting a horn with a basin decorated with flowers and tree leaves. To the right of the tomb's entrance there is another chamber that has been added during a later period.
Dr. Eman Abdel Khaleq, senior inspector of the site said that the mission has found in the tomb many artifacts such as a collection of coins dating back to the same age of the tomb in addition to many pottery vessels and two lamps.
Dr. Ayman Ashmawy Head of the Ancient Egyptian Antiquities Sector in the Ministry of Antiquities, explains that the mession working coming in cooperation between the Ministry and the board of Elalamen city wich is providing the mission with the necessary Workforce for the Mission. And a team from the Supreme Council of Antiquities has been assigned to study the human remains discovered in the site and to complete the excavation works. 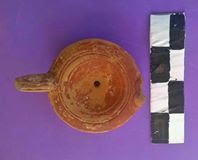