The Archaeology of Thebes and The Met | iMalqata

The Archaeology of Thebes and The Met

Although Malqata was the first site where the Museum’s Egyptian Expedition conducted full-scale excavations in the Theban necropolis, the Museum’s work several miles north in the royal temples at Deir el-Bahri, and in the tombs of officials in the Asasif Valley and adjoining cemeteries, is better known. Last Friday, on our day off, Janice and I walked over to Deir el-Bahri to see the New Kingdom temple of female pharaoh Hatshepsut, one of the best known and most visited sites on the west bank (Met Around the Word-Deir el-Bahri). 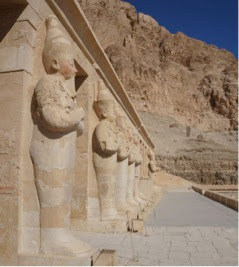 In the area in front of the temple, the Egyptian Expedition uncovered dozens of intentionally shattered statues of Hatshepsut where they had been dumped in two large depressions. Many of these were free-standing granite statues that were reassembled and are now in the Egyptian Museum, Cairo or the Metropolitan Museum in New York. Others were of limestone and had originally been part of the temple itself, the majority having been attached to the portico of the upper terrace. The Museum conducted substantial restoration work in the temple in the early 20th Century, and, since 1961, a joint Polish/Egyptian Mission has been further studying and restoring the temple (Polish/Egyptian Mission). One area of concentration has been the upper terrace, where they have restored and reattached a number of the statues representing Hatshepsut as the god Osiris, and this part of the temple is now partially open to the public.

Next to Hatshepsut’s temple, one can see another MMA excavation site – a royal temple built 500 years earlier by the Middle Kingdom king Mentuhotep II (Met Around the World-Mentuhotep II).

Relief of Nebhepetre Mentuhotep and the Goddess Hathor, The Metropolitan Museum of Art, Gift of the Egypt Exploration Fund, 1907 (07.230.2)

On our walk to these temples, Janice and I passed several other MMA sites, including an area, called Lower Asasif, which lies at the east end of the long causeway that used to lead from the river’s cultivated flood plane to the temple (Met Around the World-Lower Asasif). Most of this area now lies beneath the modern road to the temple.

Tombs of Senenmut and Dagi on Sheikh Abd el-Qurna Hill

Of the many tombs excavated by the MMA, two lie on the edge of Sheikh Abd el-Qurna hill to the south of the modern road. One of these is a tomb chapel belonging to Senenmut, one of Hatshepsut’s most important officials, who also had a tomb that tunneled beneath the first court of her temple (<aMet Around the World-Senenmut). The other belonged to a Middle Kingdom vizier named Dagi. This tomb was also reused more than 2000 years later as the site the Coptic Monastery of Epiphanius (Met Around the World-Epiphanius).