Preserving the Architecture of the King’s Palace Continues | iMalqata


Preserving the Architecture of the King's Palace Continues

Although the actual preservation program this season will be relatively short, we have several very important issues to address. In the January 10th blog the two primary purposes of preservation and presentation were discussed and defined as actually preserving the remains in such a way that they are also understandable to the public once the site is open and accessible. In previous seasons our first priority was insuring that the walls and wall fragments were protected in the main Palace area. While that basic approach continues, we are also concentrating on reconstructing several walls where little remains of the original and nothing remains above the present ground level. 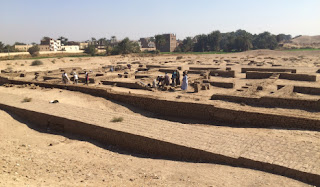 Overall view of the west side of the main palace where we are currently working.

The reconstruction of these walls in the west side of the main palace will complete most of the basic "footprint" of this important section.

Work began this season by completing the west perimeter wall, which defines the extension of room suite to the west before completing the majority of the footprint for the west side. Several sections of this wall had been preserved in past seasons and our first priority was completing that feature. We have now moved into a section of this west suite of rooms, adding known features, reconstructing missing walls, and modifying details as more information becomes known, and repointing existing masonry. Our goal is to complete all of this work over the next several days and move on to the next priority of completing the south perimeter wall and preserving the wall of the east side of the main courtyard. In the process we will lay approximately 6,000 to 8,000 mud bricks and repoint approximately 200 meters of walls. 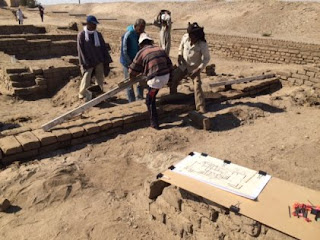 Workmen reconstructing a portion of a wall to complete the "footprint" of this area. 1910-11 Met site plan in foreground.

We continue to plan future preservation work for the two purposes described above by cleaning, mapping and documenting construction details such as brick sizes and coursing patterns and prioritizing the specific walls and areas by condition, conservation needs and interpretive significance.