Copts of the Nile: the Coptic community in Egypt today through the lens of photographer Nabil Boutros | British Museum blog

Copts of the Nile: the Coptic community in Egypt today through the lens of photographer Nabil Boutros

The exhibition Egypt: faith after the pharaohs, examines religious identity in the first millennium AD, when Egypt became first a majority Christian population and later, Muslim. Today, Egyptian Christians, or Copts, are a significant minority. The extraordinary collections of the British Museum allow us to explore religious identities in Egypt up to the present, here through contemporary photography.

In 1986, the artist, Nabil Boutros, decided to return to Egypt after living in France for ten years to explore what it meant to be Egyptian. He had trained as a painter but he decided to take up photography because he found it more useful in studying his identity as an Egyptian.

“The camera was and remains for me an instrument that allows me to go to places where I would not go otherwise. Of course, the point is to collect images; that is the compensation. Without photography, I would not have made the exploration, and I would have not had those contacts…”

Boutros grew up in a Coptic Christian family and decided to document the community in Egypt in order to better understand his own roots and to highlight the modern aspects of Coptic religious practice. Copts are one of the oldest Christian communities in the world. According to tradition, the church was founded by Saint Mark in Alexandria during the reign of the Roman emperor Nero (r. AD 54–68). Today, Copts make up about ten percent of the Egyptian population with a large diaspora living elsewhere.

Boutros spent seven years, from 1997 to 2004, photographing the Coptic community around Egypt. He visited major historic sites such as the Monastery of Saint Paul (founded 5th century AD) and Deir El-Maymoun (founded AD 361–363), and attended ceremonies that have continued for thousands of years. As a Copt himself, he wanted to highlight the contemporary individuals who visit and worship at these locations, or as he says, “to get as close as possible to the quotidian.”

He always includes people in his photographs, noting that Western photographers often depict these monuments without figures, as if they are no longer in use. His photographs often only show one or two people, even in the midst of large ceremonies. For example, he portrays a single woman in front of a small statue of the Virgin Mary at the pilgrimage to Deir Dronka, near Assiut, which draws thousands of people in August each year. In this way, he draws attention to individual worship and personal stories.

“I knew it was a part of me, from my upbringing and my culture, but to be able to make the connection between things from the distant past with more contemporary things strengthened me. To know the history of things that I experienced personally, to understand the historical links allows me to find the foundation; that comforts me a lot, fulfils me.”

Boutros arranges his photographs in the same way as they are found in the screens of Coptic churches where Biblical stories are depicted (polyptychs). However, unlike church paintings, his compositions do not form a clear narrative. Instead each photograph in a composition is taken from a different time and place. Boutros explains that his photographs are not meant to be documentary but instead resist the viewer’s preconceptions about the Coptic community. In his early photography exhibitions, he presented his photographs individually and allowed researchers to add text. However, he found in this case that the researcher’s words took over the images and did not convey his original intentions.

“This experience was a good lesson for me: I understood that if I did not engage in a discourse with the images, the written discourse would take the place of my intent. After that, I started to reclaim my photographs – on Copts, the city, etc. – and to create new compositions working with polyptychs. I also started adding titles, to indicate what I was talking about, but I could no longer content myself with the image alone…I started to complicate things, first by combining groups of black and white images, and then by introducing strips of colour photography in-between the black and white photographs.”

In response to an attack on a Coptic church in December 2010, Boutros and the artist Moataz Nasr, created a poster using another series by Boutros called Egyptians, in which he portrayed himself with different identities throughout the year. The poster included the slogan “We are all Egyptians” (كلنا مصريون), and was popular in Tahrir Square during the revolution. 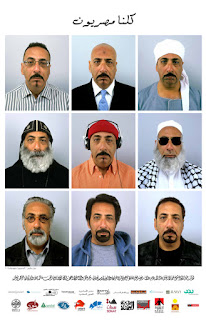 Nabil Boutros was born in Cairo in 1954. He studied decorative arts in Cairo and then painting at l’Ecole Nationale Supérieure des Beaux-Arts in Paris (1973). He worked as a painter and lighting designer for theatre before committing himself to photography in 1986.

Egypt: faith after the pharaohs is at the British Museum until 7 February 2016.

The accompanying book is available from the British Museum shop online.