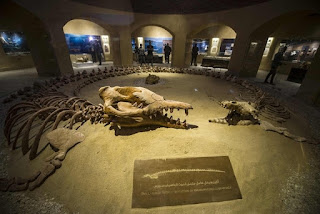 FAYOUM, EGYPT // The Middle East's first climate change museum opened in Egypt on Thursday at the site of some of the most historically significant and visible signs of the phenomenon in its naturally occurring form.

The museum is located in the Valley of the Whales, a desert area 150 kilometres south-west of Cairo, where whale fossils lie spread across what was once a seabed.

"It's incredible to be standing in a place that was once an ocean more than 40 million years ago," said Anita Nirody, the United Nations Development Programme's resident coordinator in Egypt. The UNDP helped implement the museum project, which was funded in part by Italian debt swaps. Under this arrangement, money that was owed to Italy by Egypt was instead used to fund development projects in the country.

The Wadi El Haitan Fossil and Climate Change Museum focuses more on fossils and natural climate change rather than the man-made kind that grabs headlines. But it nonetheless aims to bring tourists to Egypt, which is deeply in need of visitors after suffering from a string of extremist attacks targeting tourists.

Last November was the worst month for tourism in Egypt since 2013, with numbers down 38 per cent from the same time period in 2014. Last October a suspected bomb attack on a Russian passenger jet over Egypt's Sinai desert killed 224 people, prompting Moscow to ban all Russian flights to the country.

Fayoum hosts some of the best-preserved whale skeletons in the world from the Eocene period of the Earth's history, which ended 33.9 million years ago. The museum itself, designed by Egyptian architect Gabriel Mikhail to blend into the natural surroundings using local materials, contains the largest known complete fossil of Basilosaurus isis, a legged whale.

The museum also features other fossils from the ocean including crabs, Dorudon Atrox and another whale, as well as fossilized mangroves from a later, more swampy period.

Although a retreating sea leaving behind whales was an undeniably dramatic consequence of climate change, a more significant change in Egypt's history took place 6,500 years ago, when the winter rains that usually batter the Mediterranean coast and the Nile Delta began moving farther inland.

Within a few generations, nomads who had survived mostly by fishing on the shores of Lake Qaroun had received enough regular rainfall to start farming. When the rainfall pattern shifted again after 500 years, the fishermen-turned-farmers slowly migrated east to the Nile Valley, taking agriculture with them, and sowed the seeds of Pharaonic Egypt.

The museum features photos of archaeological finds revealing the history of agriculture in the Western desert, and the eventual movement of most of its human population to the Nile Valley.

"This is something that happened within a few generations, within the period of human memory," Willeke Wendrich, professor of Egyptology at the University of California Los Angeles, told The National.

Now, Egypt's low-lying geography, its population's dependence on agriculture and its arid climate make it particularly vulnerable to human-caused climate change, the consequences of which are also taking place within human memory.

"On the agricultural level, desertification has clearly occurred in [the Oasis of] Farafra and parts of southern Egypt due to high temperatures caused by climate change," said Islam Qandil of the climate group 350Egypt. "And the near future will be worse due to the [use] of coal in the cement industry."

At the Paris Climate Summit in November, president Abdel Fattah El Sisi was responsible for speaking on behalf of African nations, with Egypt heading the Committee of African Heads of State and Government on Climate Change.

Mr El Sisi told the conference that Africans were less responsible for emissions than developed countries and so should contribute more to the effort to combat climate change. He said developed countries should provide technology and investment to help developing countries adapt to climate change, rather than just focusing on emissions. In 2011, Egyptians emitted about 2.6 tonnes of carbon each, compared to 8.9 per German, 17 per American, and 20.4 tonnes per Emirati.

The Egyptian cabinet announced last week that it had reached a provisional deal with Chinese companies to build two coal-fired power plants on the Red Sea, a cheaper source of energy than renewable technologies but more costly to the environment. For Egypt's short-term development power is the most pressing need, with the government prioritising its production over longer-term considerations, such as climate change.