At the real Highclere Castle, there's no shortage of history 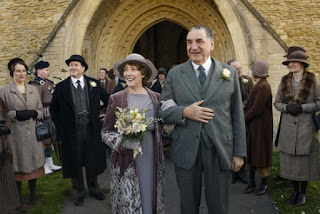 What’s the biggest misconception about Downton Abbey location Highclere Castle among viewers of the show? According to the current Countess of Carnarvon, many viewers don’t understand how much real history there is in the house.

“We have been open since 1988, when the queues were at first as long as in this Downton time, because my father-in-law and Robert the butler had discovered various Egyptian treasures hidden away,” she noted in an email to LIFE Books.

That’s right: well before Downton, Highclere and its residents were famous for the fifth Earl of Carnarvon’s role in discovering the tomb of King Tutankhamen in 1922. As TIME explained in 1988, his grandson, a later Lord Carnarvon, had thought he knew of every treasure in the castle—until a 75-year-old butler told him, as TIME then reported, “Except for the Egyptian stuff, my lord.”

And stuff there was:

Thereupon he began revealing more than 300 ancient objects that had been hidden in secret cupboards and unused rooms of the castle for more than 70 years. Among the trove was a 3,200-year-old carved wooden face of Amenophis III. Last week Lord Carnarvon announced that the treasures will go on public view at Highclere. Who squirreled them away? No one knows, but it seems that the sixth Earl Carnarvon, son of the man who entered Tut’s tomb, was furious after he lost a lawsuit in 1924 against the Egyptian government for a half share of the crypt’s riches. Miffed, the aristocrat forbade any mention of Egypt.

Most of the Egyptian treasures from the excavations that had led to the discovery of King Tut’s tomb had, if they left Egypt at all, been donated to the British Museum. The objects unearthed in 1988, as well as some others from Carnarvon expeditions, can still be seen at the castle.

But it was Downton that finally turned the domain into an international tourist attraction, a fact the Countess hopes to continue even though the hit show’s run has ended. “I am focusing on sharing different aspects of what makes Highclere resonate with guests and visitors,” she says.

The LIFE commemorative edition Downton Abbey: Behind the Scenes of the Iconic TV Show is available in stores now.