Tha artist in Ancient Egypt followed the rule of depicting children with the side lock of hair.

However, this archetype so common in the Old and Middle Kingdom, had some changes from the New Kingdom on. 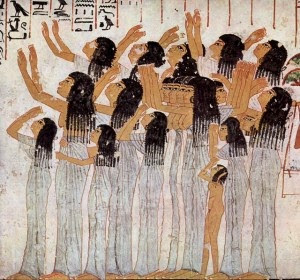 It is specially evident in the mourning scenes. Among the mourners usually some young girls can be seen taking part in the mourning performance, crying and rising arms as their adult companions. These young girls could be depicted in a smaller scale or nudes, showing this way their lower status. Also, according to the canon of Ancient Egypt, they should be represented with the side lock of hair. But from the New Kingdom it did not always follow the rule and some variations were introduced in the way of drawing the chiildhoodin Ancient Egypt.

For instance already in the tomb of Ramose, dating from the XVIII Dynasty, there is a group of common mourners in the funerary cortège. Some of them could be young girls due to their smaller size in the depiction, although they appear with the same long hair and the same clothes as the adults. One of them, however, was really a very young girl, due to the samller scale, her nudity and her different hairstyle: a middlelong hair, fringe and sidelock of hair. 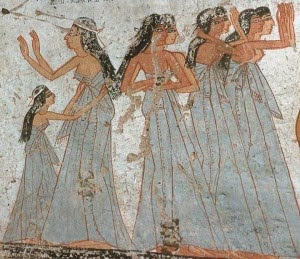 In the tomb of Ameneminet (TT277) from the XIX Dynasty, the ancient Egyptian artist drew a group of seven common mourners. A young girl stands in front of them  with her colthes and her hairstyle as the adult women. She is depicted in a smaller scale and she does not seem to make a mourning gesture, butshe moves as if she was trying to hold the women in front of her (maybeher mother?), in a typical dependence gesture of children.

The tomb of Khonsuemheb, discovered in el-Khokha by the Japanese mission of the Waseda University, belongs also probably to the Ramesside period. The funerary procession has a group of three mourning men and six mourning women. Four girls tale also part in the common mourning ritual. Although they make the mourning gestures as the adults, they are depicted in a samller scale, naked and with middlelong hair or with lock of hair. It is interesting to notice that the four present their pubic hair, so they were adolescents. 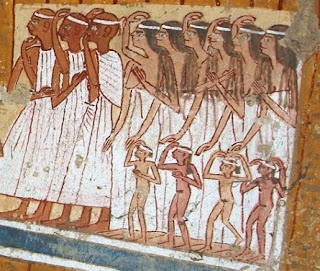 So, it seems that during the New Kingdom the young girls taking part in the mourning rite of Ancient Egypt did not need to be depicted according to the canon of Egyptian art. The side lck of youth maybe was optional for the Egyptian artist. He had manys ways of representing the adolescence of these incipient mourning women: nudity, middlelong hair, gesture of dependence, pubic hair…but he always had to follow one basical rule: she had to be depicted in a smaller scale.