What is behind the bones… | Ancient Egypt Research Associates

What is behind the bones…

The study of the skeletal remains is an essential part of the study of biological anthropology. The Field-School 'osteo' course was designed to introduce the students to the main aspects of the human remains. We explain the main principle of the excavation of human remains, which follow the same general principles and instructions of archaeological excavation, but needs special additional techniques and tools for the bioarchaeologist. 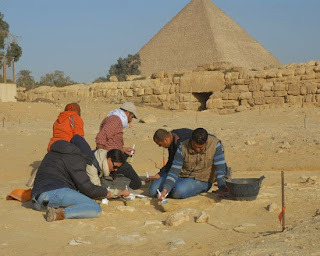 Students from group 3 digging burials, view to the north. Photo by Ahmed Gabr

We try to explain to the students what kind of information we can gain from studying the human remains. Because this is only a Beginners' Field school and the course is so short it is not meant to train bone specialists, but just to make the students familiar with the methodology of dealing with the human remains in their sites, especially in the case of emergency. So they learn how to deal with the burials they may meet during their work as archaeologists. They can save as much information as possible until an osteologist is available. We also prepare the students in case they choose human remains as their specialty in the Advanced Field-School.

During the 'osteo' week the students were expected to participate actively in the lectures, do some reading, as well as excavate and record burials on site. They are evaluated according to their initiative, team work, work ethic and attitude, in addition to a final exam for practical knowledge.

The course was divided into three main parts: theory, field work, and lab. In the theory part we give them only the main headings – the basics in the anatomy of the human body. They learn how to recognize the main landmarks of the human skeleton. In the beginning of the lectures the students were screaming 'this is a lot of work to do!' but after using the handouts and the visual aids they felt more relaxed.

After the theoretical lectures the students have to go to the lab to apply what they learned. They will be able to do more practical bone analysis on the archeological remains after dealing with the modern remains – the comparative collection of medical specimens in the study room. 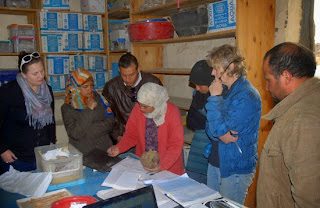 After attending the theory and lab sessions, the students go the site to apply what they learned.

To participate in the burial excavation process each group spent 3 days in the site, where the work starts, as usual, so early (7am!).

Each two students start digging their own burial – starting from the zero point and going through all the procedures. Each group is competitive (in a good way) to clear their coffin and skeleton accurately and fast. They are very proud of their work and they usually give an Egyptian name to each individual. They work as an 'army mission' even in the very bad weather! 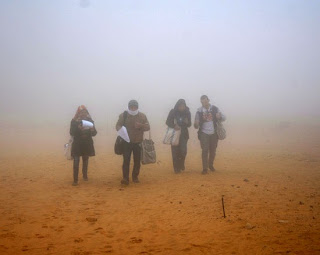 Foggy day – work continues in all kinds of weather. Photo by Ahmed Gabr

This season we worked in the Western Compound area. Seven coffins burials were excavated: 6 of them were adult burials and one for an infant. So the students know how to deal with both – adult and child burials. Some of the burials had very nice colored and painted mud-coffins. One of them with a very unique anthropoid painted mud-coffin with a mask. This was similar in shape, type and decoration to another coffin burial excavated in 2006 season nearby. Each pair of students has the opportunity to excavate, record, and lift a coffin burial, so they learn how to deal with both the coffin and the skeletal remains. 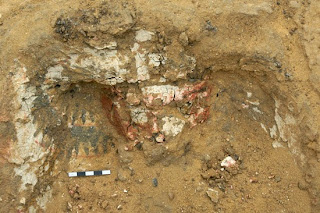 The students present their work in the site for the visitors. Samar, one of the students, explained the excavation of an infant burial to the USAID visitors. She mentioned to me that in the beginning she was nervous but because she did this work with her own hand she explained very well. She said 'I felt like I am talking about my baby.' 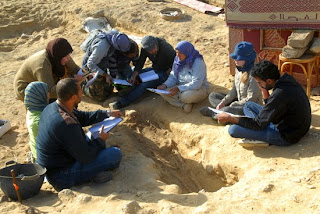 Careful recording of the skeleton by field-school group 1. Photo by Ahmed Gabr

One of the burials was very deep. It also had a collapse feature about 20 cm above it. So we spent three days lying on our tummies. The excavation was hard, but amazing when we cleared the body. In the end we were all stuck on the ground and each time we went for the lunch break we were very tired and starving. 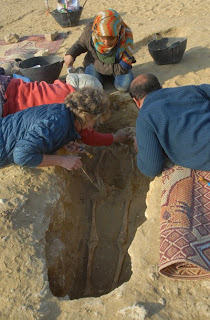 In the end the students will be able to deal with human remains in an accurate and scientific way. By teaching them the archeological and osteological field methods, they will know how to record and lift a skeleton without losing any information.