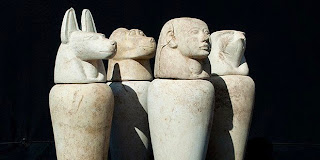 CAIRO:  Egyptian antiquities headed for the auction block in Germany will be repatriated to Egypt, Mohamed Hegazy, the Egyptian ambassador to Federal Republic of Germany told state-owned MENA Tuesday.

The artifacts, which had been shown in a mass exhibition in Berlin, may stay in Germany for some repairs in cooperation with the Egyptian Museum in Berlin, before their return to Egypt, Hegazy said.

The Egyptian Embassy will host a concert on April 2 to declare the receipt of the artifacts, and express thanks to German authorities and the Egyptian Museum in Berlin for their effort, he added.

The iconic bust of Queen Nefertiti, currently on display at Berlin’s Neues Museum, remains one of Egypt’s top artifacts the country has said should return. The bust in 1912 by German archaeologist Ludwig Borchardt, who Egypt claims misled authorities regarding to the value of the bust to be allowed to take it out of the country; Germany claims the ownership of the artifact is not in question.

Political turmoil in Egypt since the January 25 Revolution in 2011 and the subsequent security lapse left the country’s cultural heritage vulnerable to looting. In spite of the efforts of the Egyptian government in tracking artifacts smuggled outside Egypt and in auction houses abroad, the issue is still unsettled.

In July 2014, 24 ancient Egyptian artifacts were returned from the Egyptian Museum of Leipzig University in Germany. Minister of Antiquities Mamdouh el-Damaty traveled to Germany to supervise the administrative procedures accompanying the repatriation of the artifacts, ONA reported.

The artifacts spanned several eras of ancient Egyptian civilization and were likely stolen from the west bank of Luxor, the head of the Antiquities Ministry’s Restored Artifacts Department Ali Ahmed told The Cairo Post.