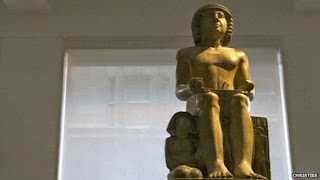 A 4,000-year-old Egyptian statue that was controversially sold by a council for £15.76m will not be allowed to leave the country, Culture Minister Ed Vaizey has said.

But Ed Vaizey has placed a temporary export ban on the statue, and Arts Council England says "it's possible" a new buyer within the UK may be found.

The current owner's identity and location have not been released.

The council said the temporary bar had "no impact" on the sale of the statue, which had been in its possession since 1880 and was put to auction in July to fund an extension of the town's museum and art gallery.

A spokeswoman said it was up to the "current owner, Arts Council England and the Department for Culture, Media and Sport to resolve".

Protesters gathered outside Christie's before the sale, the council has since been banned from the Museums Association and has had a Heritage Lottery Fund bid rejected as a consequence.

Mr Vaizey decided to bar the export following a recommendation by the Reviewing Committee on the Export of Works of Art and Objects of Cultural Interest (RCEWA), which is administered by Arts Council England.

The RCEWA said the statue was of "outstanding aesthetic importance" and was significant in the study of "the development of private statuary and funerary religion in Egypt and the history of human self-representation".

A decision on the export licence application has been deferred until 29 July.

Arts Council England said there was a chance the statue could be sold to a buyer within the UK, if "a serious intention to raise funds to purchase the statue is made at the recommended price of £15,732,600 plus VAT".

Egyptian Ambassador Ahsraf Elkholy had condemned the sale as an "an abuse to the Egyptian archaeology and the cultural property".

He said the statue of Sekhemka, who was a royal chief, judge and administrator, should have been handed back to Egypt if the council no longer wanted it.