'Digitally unwrapped' Egyptian mummy was a healthy Pharaoh with 'beautiful teeth' 3,500 years ago 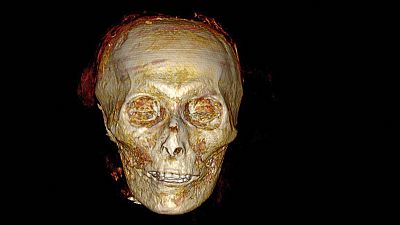 Egyptian scientists have digitally unwrapped the 3,500-year-old mummy of pharaoh Amenhotep I, finally revealing some of its secrets after the remains of the king were discovered in 1881 in southern Egypt.

The non-invasive research enabled scientists to reveal Amenhotep's face and work out his age and health at the time of his death.

The remains of the pharaoh, who ruled approximately between 1525-1504 BC, were discovered in Deir Al Bahari in 1881 and had remained unwrapped until Egyptologist Zahi Hawass and Cairo University professor Sahar Saleem launched an in-depth study in 2019.

Decorated with flower garlands and a wooden face mask, Amenhotep's mummy was so fragile that archaeologists had never dared to expose the remains before, making it the only royal Egyptian mummy found in the 19th and 20th centuries that was not yet opened for study.

Hawass and Saleem used advanced X-ray technology, computed tomography scans, and digital software to map out the mummy in great detail, without stripping it of any of its strips.

The team also discovered that the king had been the first ruler to be embalmed with his forearms crossed in the so-called Osiris position.

In addition, they found amulets and a girdle festooned with gold beads under the mummy's wrapping.

Talking about the study, Hawass said the findings were a "major important discovery".

"He died at the age of 35. We found the brain inside the mummy, and this has never happened with other mummies. We also discovered that the mummy had been mummified in the manner of Osiris. This is the first time, but all subsequent mummies are in the same position," Hawass revealed.

"It shows how technology could help unravel the secrets of Egypt's past," the famed archaeologist added.

"We started the process with computed tomography-scanning in May 2019, a scanner that you usually use for people, for humans, and we have one in the garden of the Egyptian Museum in Cairo. The process was to take the mummy from the museum and a few metres to the garden to be CT-scanned for a very short time," Saleem told Euronews.

We got to know his age at death — he was about 35 years old, and we got to know that he was a healthy man. He had beautiful, good teeth.

"The mummy returned back to the museum and I worked on the thousands of images taken by the X-ray. I put them together, processed them, used software to put them in 2D and 3D to be able to digitally remove the mask and all the layers from the king — and we were able to look at the king's face and have more information that had been hidden for more than 3000 years," she explained.

The Cairo University professor revealed that the king, who ruled for 21 years, was a "healthy man", with "beautiful, good teeth".

"We had a look at the way he was mummified and we now know for sure that he was the first king from ancient Egypt to start the 'tendency' of the royal mummification with the arms crossed, also known as 'the manner of Osiris'. He was then followed by other kings. We also know that he is wearing 30 amulets in between the wrappings and inside his body, as well as a golden belt at his lower back," Saleem added.

Thanks to the thousands of images taken by the X-ray, Saleem was able to look at the face of Amenhotep for the first time, and discover that he had an oval face with a narrow chin and even "a little bit of an overbite, which he probably inherited from his father King Ahmose I."

"So to look at the resemblance in the official features of the king and of his father, it's just like knowing the family very well now," she shared.

The respect of the mummy as a person is very important ethically, in our sense.

Leaving the mummy intact while they worked on it was really important for Hawass and Saleem, as the outside environment could have disturbed and destroyed the "inside environment" trapped inside the strips for millennia, had they decided to unwrap the remains.

"This is a very important heritage, and he was a human being, he was a king. The respect of the mummy as a person is very important ethically, in our sense," Saleem revealed.

According to egyptologists, Amenhotep I was the last pharaoh whose brain was not removed from his skull at the time of his mummification.

Researchers were unable to find any injury or disease that could have caused the death of Amenhotep and speculate that he may have died of a heart attack.

Watch the full interview with Cairo University professor Sahar Saleem by clicking on the link at the top of this email.