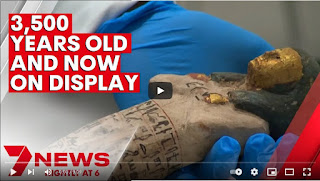 An ancient artefact has found a new home at a museum here in Sydney. With curious links to Tutankhamun and Downton Abbey. It's the gift of Suzanne Harris whose family acquired it through a famous English aristocrat. The Egyptian shabti, is now part of the Pharaonic Obsessions exhibition, 'Egyptian Galleries' at the Chau Chak Wing Museum University Place, University of Sydney, Camperdown. Admission is free - Open Mon-Fri 10am-5pm, Sat-Sun 12-4pm. Sydney University Statement: An ancient funerary figurine whose well-travelled history includes links to Tutankhamun and the set of Downton Abbey has been donated to the University's Chau Chak Wing Museum. The Egyptian shabti dates to the 18th dynasty (c. 1550BCE) and was excavated by the fifth Earl of Carnarvon. The Earl was the owner of Highclere Castle, which rose to fame in recent years as the popular period drama's filmset. The newly acquired figurine was discovered in 1908 during the Earl's first archaeological expedition, at the Tomb of Tetiky in Thebes. It was taken from the tomb of Tetiky's mother, Senseneb. Shabtis are small figurines placed in tombs to perform labour in place of their owner in the afterlife. Shabtis first appeared in the Middle Kingdom (c.2030-1640BCE) and were commonly used for 2000 years, fading out in the Roman period. It will be on permanent display at the Chau Chak Wing Museum from 8 November. The shabti of Senseneb was among eight discovered during excavations of Tetiky's tomb and one of almost 1700 artefacts comprising the Highclere collection, which also included objects from the Earl's famous 1922 uncovering of Tutankhamun's tomb. It was thought the entire antiquities collection was sold to New York's Metropolitan Museum after the fifth Earl of Carnarvon's death in 1926. But the death of his son, the sixth Earl, in 1987 revealed several artefacts had been 'hidden' among the furniture at Highclere Castle. A wooden cupboard from the Highclere estate, purchased by Maximilian Preston in 1926 or 1927, set the course for the shabti of Senseneb's journey to Australia. Preston was born Maximilian Pollak in Prague. He moved to Australia in 1904 where, after being interned during World War I, he changed his surname. In 1926 he emigrated to England, where lived for two years and purchased the cupboard from Sotheby's. After discovering the 'hidden' artefacts, Preston returned them to Sotheby's. Lord Carnarvon (the Sixth) gifted him the Senseneb shabti and its model coffin in gratitude. After Preston's death in South Africa in 1937, his daughter Helene emigrated to Australia with her Australian husband. Her daughter, Preston's granddaughter, Suzanne Harris donated the objects to the Chau Chak Wing Museum's Nicholson Collection this year, to ensure their continued preservation. Shabtis became essential during Egypt's New Kingdom period (c1550-1070BCE), a status symbol which sometimes numbered in the hundreds, said Nicholson Collection senior curator Candace Richards. "Wealthy tomb owners could have a shabti for each day of the year plus an 'overseer' for each of the 36 weeks per year. "With its gilt face and hands, blue wig and with a 'shabti spell' inscribed on its torso, the Senseneb shabti is an early example of an emerging design for these elite tombs. The British Museum holds three shabtis from the same tomb, but this Senseneb is a unique acquisition for an Australian museum." "We're delighted to add this generous gift to our antiquities collection," said museum deputy director Paul Donnelly. "It will take pride of place in the Pharaonic Obsessions exhibition, a permanent exhibition in our Egyptian Galleries, and entrench the Chau Chak Wing Museum as the holder of the largest antiquities collection in this part of the world." The Chau Chak Wing Museum is open free of charge to the public. Its Nicholson collection of antiquities is the largest in the southern hemisphere. Subscribe to 7NEWS Australia for the latest news video » https://7news.link/YTSubscribe Connect with Seven News online Visit » https://7news.com.au 7NEWS Podcast » http://smarturl.it/7NewsDaily Facebook » https://www.facebook.com/7NewsAustralia Twitter » https://twitter.com/7NewsAustralia Instagram » https://www.instagram.com/7newsaustra... 7NEWS combines the trusted and powerful news brands including Sunrise, The Morning Show, The Latest, and 7NEWS.com.au, delivering unique, engaging and continuous coverage on the issues that matter most to Australians. Watch 7NEWS nightly at 6pm and weekdays at 11:30am and 4pm on Channel 7 and 7plus. #UniversityofSydney #Shabti #EgptianHistory #7NEWS
Posted by Glenn Meyer at 11:40 PM