The Voynich Manuscript: Has an Egyptologist managed to unravel the secrets of the world's most mysterious book? - The National

The Voynich Manuscript: Has an Egyptologist managed to unravel the secrets of the world's most mysterious book?

Rainer Hannig believes he might have cracked the case that's been baffling scholars for years.

The German Egyptologist has managed to decipher parts of the Voynich Manuscript, a mysterious document stored at Yale University that's made up of elegant handwriting and strange drawings that no one has ever been able to make sense of.

There have been many past attempts to work out what the illustrated codex's unique text says, but all have failed.

The document consists of a mixture of Latin letters, Arabic numbers and other unknown characters. However, Hannig, from the Roemer and Pelizaeus Museum in Hildesheim, Germany believes he's figured out the language to be based on Hebrew.

"A lot of languages were proposed such as Latin, Czech, or amongst others Nahuatl, just to name a few," he wrote in an article explaining his process. He adds that the word structure leaves only one possible explanation: the manuscript was not composed in an Indo-European language.

A Dh250,000 edition of 'The Wonderful Wizard of Oz': rare fantasy and sci-fi books up for sale

Using this logic, he then concluded, after three years of analysis, that it must be a Semitic language, possibly Arabic, Aramaic or Hebrew. These were languages spoken by European scholars of the Middle Ages, as the document dates back to the 15th century.

Spotting a connection between some of the characters and Hebrew specifically, he managed to translate full sentences.

"The actual translation of the Voynich-book will need a couple of years work, even if specialists in Hebrew language, who are well versed in mediaeval Hebrew and the terminology of botanical and medical texts, take over the analysis," he wrote.

"The character of the script, the pronunciation which one needs to get used to, the peculiarity and the vocabulary of the period will cause a lot of trouble even to a native speaker."

What exactly is the Voynich Manuscript?

The 15th-century codex is known to be the world's most mysterious book. It was written in an unknown script by an anonymous author and has no clear purpose.

The manuscript was rediscovered by rare books dealer Wilfrid Voynich in 1912 and, since 1969, it's been kept in the Beinecke Rare Book and Manuscript Library at Yale University in New Haven, US.

Watch this video from Yale University to learn more: 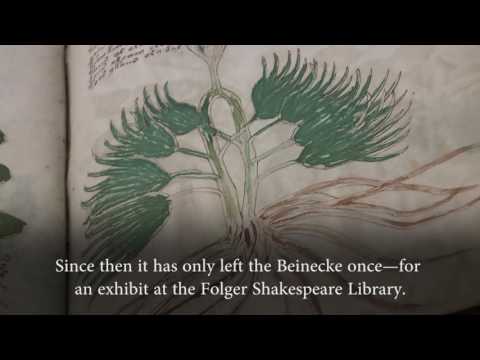 It's baffled so many codebreakers, scholars and cryptologists over the years that it's even featured in popular culture, from TV shows to books and video games.

It has a patchy historical record before Voynich found it. It is said to have formed part of the Holy Roman Emperor Rudolf II's library and was tracked back to a secret sale of books in 1903 by the Society of Jesus in Rome, for example.

Its elusiveness stems from the elaborate illustrations of plants, constellations, fantastical creatures and signs of the zodiac, to name a few. Not to mention its unreadable language.

It's become a source of fascination for scholars across the world in a number of disciplines. And while it has been suspected in the past that Hebrew was the source language, others have claimed it's all simply a hoax.

A conference will now take place in Hildesheim this August for scholars to discuss Hannig's breakthrough.