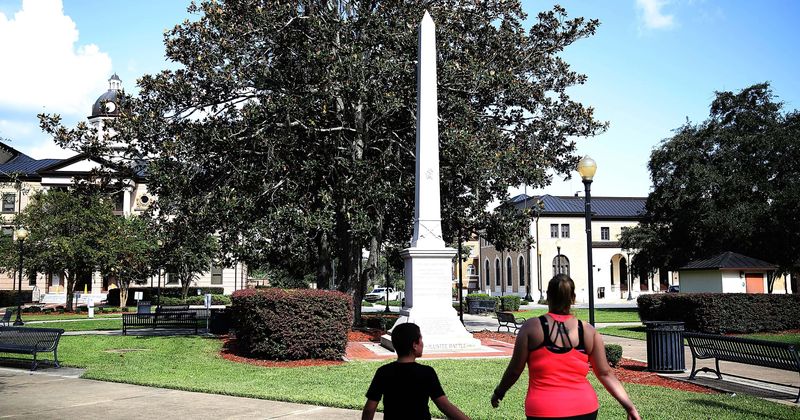 A granite obelisk monument in US (Getty Images)

With protests against racism refusing to die down in the US, a top archaeologist has come up with instructions on social media on how to bring down an obelisk. Confederate monuments and statues have faced the ire of the protesters in the wake of the killing of George Floyd in Minneapolis last month. In states like Alabama and Tennessee, a Confederate monument was defaced while a couple of states of Confederate leaders were toppled over the weekend as part of the demonstrators' venting rage.

Sarah Parcak on Sunday, May 31, posted a series of tweets that did not speak about a specific protest but indicated at the Confederate monument in Birmingham's Linn Park. She also gave hint that she is aware of the police brutality that killed Floyd on May 25. In the tweet which she started as a "Public Service Announcement", Parcak said: "PSA For ANYONE who might be interested in how to pull down an obelisk* safely from an Egyptologist who never ever in a million years thought this advice might come in handy." She also explained obelisk in a footnote saying the structure might be "masquerading as a racist monument". Parcak is an archaeologist at the University of Alabama in Birmingham.

On Sunday, a Confederate monument was defaced while the statue of Confederate captain Charles Linn (1814-82) was brought down. A day earlier, protesters in Tennessee's Nashville pulled down a statue of Edward W Carmack (1858-1908), a former senator and newspaper publisher who wrote racist editorials and was shot by a political rival. Amid the ongoing protests against racism, demonstrators have defaced and destroyed monuments in various cities. Even the iconic Lincoln Memorial in Washington DC and the National World War II Memorial could not evade the protesters' wrath. Vandalism and defacing with graffiti were a common sight at a number of monuments.

Sarah Parcak gave detailed guideline on how to pull down obelisks

In one of her tweets explaining how to bring down an obelisk, Parcak said: "You have two groups, one on one side, one opposite, for the rope beneath the pointy bit and the rope 1/3 down. You will need to PULL TOGETHER BACK AND FORTH. You want to create a rocking motion back and forth to ease the obelisk from its back." In another post in the same thread, she said: "I recommend a rhythmic song. YOU WILL NEED SOMEONE WITH A LOUDSPEAKER DIRECTING. There can be only one person yelling. Everyone will be alternating on rope left right left right not everyone on the same side. No one else near the obelisk! Safety first!"

She also posted a rough illustration showing how an obelisk can be brought down by pulling it from two directions. She, however, said in another tweet: "BUT OF COURSE THIS IS ALL ENTIRELY HYPOTHETICAL." Parcak, in her Twitter tutorials on bringing down obelisks, however, asked people not to bring down Egyptian obelisks or even the Washington Memorial. She is an Egyptologist by training who has worked in Egypt for 20 years and has a fair understanding about ancient Egyptian architecture. In 2016, she won a $1 million TED prize and used crowd-sourced funding to use satellite imaging to identify archaeological sites.

"My Bona Fides: I'm an Egyptologist. I have worked in Egypt for 20 years and know a lot about ancient Egyptian architecture. Especially how they raised obelisks," one of her tweets read. Parcak's final dig at the monuments came when she tweeted: "WATCH THAT SUMB*TCH TOPPLE GET THE %^&* OUT OF THE WAY IT WILL SMASH RUN AWAY FROM DIRECTION. Then celebrate. Because #BlackLivesMatter and good riddance to any obelisks pretending to be ancient Egyptian obelisks when they are in fact celebrating racism and white nationalism."

Parcak faced a massive backlash on Twitter for her posts. One Twitter user replied to Parcak by tagging President Donald Trump, Vice President Mike Pence, justice department and FBI seeking an investigation into individuals "for instructing terrorist how to inflict damage to property." Another slammed Twitter saying the social media platform was okay with Parcak's tweets because it is okay with the destruction of America. A third one called Parcak a "white woman stoking racial violence at a volatile time" in the US and called it "criminal". In August 2017, a 'Unite the Right' rally was planned to protest against the removal of a statue of Confederate leader General Robert E Lee and the protest eventually saw a clash in which one life was lost. Two policemen also died after their helicopter crashed while flying to the rally.