While the megalithic stone monuments of northern Arabia remain largely unknown, the discovery of a vast ritual platform and Egyptian artifacts in northern Saudi Arabia has shed light on the evolution of human occupation and ritual use in the region.

In a collaboration with the Saudi Ministry of Culture , Dr. Olivia Munoz, a researcher at France's Nationwide Center for Scientific Analysis ( CNRS), led the international team of archaeologists from France, Saudi Arabia and Italy, that discovered a vast 35-meter-long (115 ft) triangular ritual platform buried at the oasis settlement of Dûmat al-Jandal in northern Saudi Arabia . What was even more unexpected was that in a looted tomb, among decaying ancient bodies, they discovered ancient Egyptian artifacts . 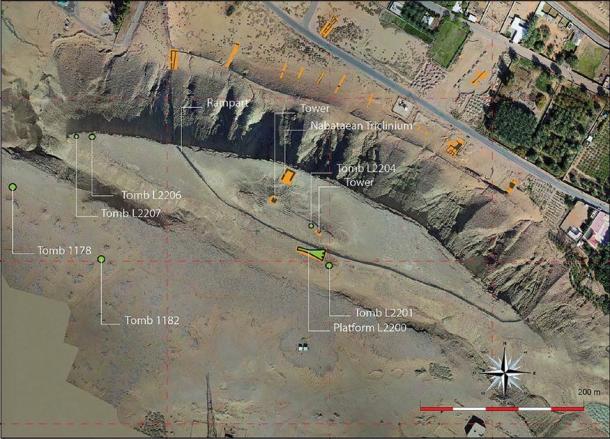 Arabian Ritual Platform Was Constructed in the Sixth Millennium BC

A new paper, published in the journal  Antiquity, presents a scientific study that includes carbon-14 dating of artifacts and human remains from deposits found in and around the platform, in two side niches and in nearby tombs. The paper demonstrates how the structure was operative since the sixth millennium BC and was used for funerary and commemorative rituals. According to an article in PHYS these discoveries "are a potentially symbolic imprint left by  nomadic pastoralists in the landscape during this remote period". 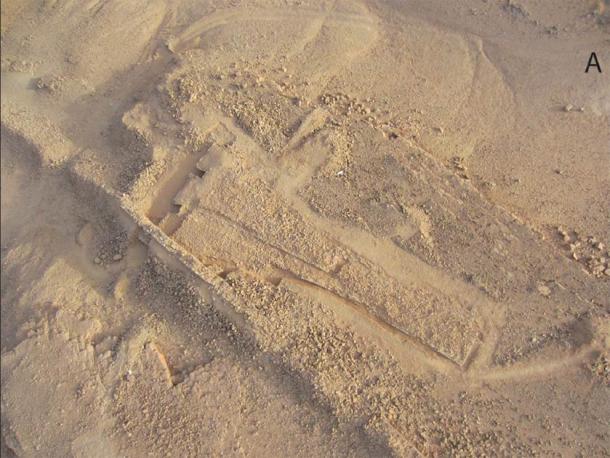 The archaeologists discovered the monumental ruins on the oasis settlement of Dûmat al-Jandal. Near the enormous triangular platform they found tombs spanning from the mid sixth millennium BC until about 50 AD. The archaeologists found the vast triangular platform had been filled with irregular stones and it was surrounded by dry-stone exterior partitions, one of which contained two niches, according to the PHYS article.

Oriented on a west-northwest to east-southeast axis, aligning with the path of the winter solstice sun, the paper explains how the ritual platform had been built in several phases beginning about 8,000-years-ago. Beneath the stones, a number of human bodies were discovered which researchers conclude to mean that the area was symbolically important and the site of social and ritual activity since its construction. 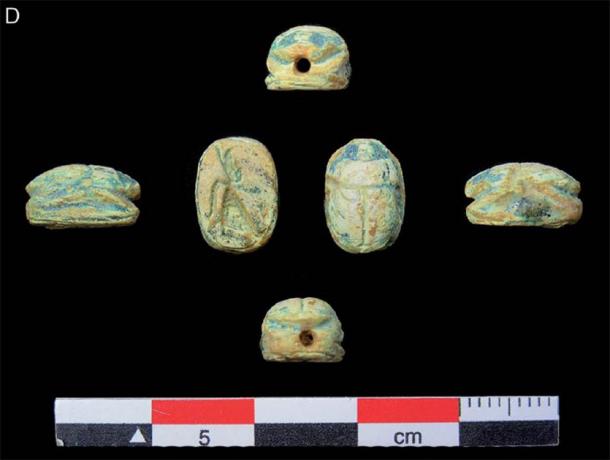 The second phase of burials at the platform told the archaeologists that the monumental edifice had served a ritual or funerary function. The monumentality of the ritual platform suggests that this was an area of collective commemoration and social ritual. The results of the research conducted and published in Antiquity state that "the platform constituted a ceremonial space for social and ritual activities, providing a material anchor for social memory and identity construction, as well as a territorial marker, for the mobile pastoralists of the area".

The third burial phase dated to about 5,400 to 5,000 years ago. These tombs had been looted, but the archaeologists discovered thirteen beads: two cylindrical shell beads, three cylindrical stone beads, three flat beads of whitish stone and five carnelian beads. Furthermore, seashells from the Pink Sea, a faience bead with Egyptian glaze and a scarab beetle amulet from ancient Egypt.

The stone scarab is covered with an Egyptian blue glaze and is engraved with a stylized pharaoh wearing his traditional headdress and extended pleated skirt, or kilt, which is detailed with cobras protruding from it. This particular discovery, and that of other Egyptian artifacts, indicates ancient trading relations between the inhabitants of Dûmat al-Jandal and ancient Egyptian New Kingdom , which dominated from the 16th to the 11th century BC. But how did it get from Egypt to a sacred oasis platform deep within ancient Arabian territory?

The paper concludes that the presence of the Egyptian crafts is due to the site's proximity to the Sinai and to the Southern Levant. Egyptian scarab-shaped seals circulated from the early second millennium BC to the mid-first millennium BC. We will never know how these artifacts made their way to Saudi Arabia from ancient Egypt, but hopefully further excavations at the ritual platform will help us understand life in Saudi Arabia 8,000 years ago.