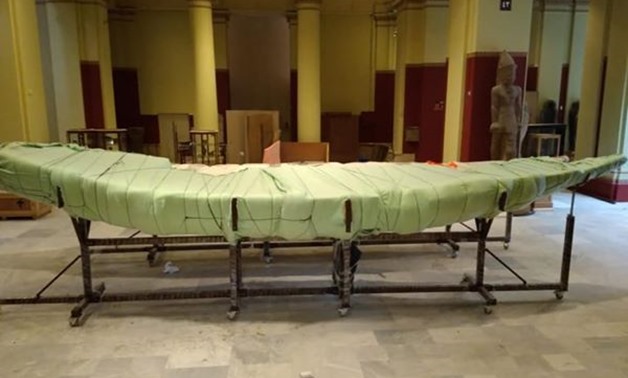 The three large artefacts are the two wooden boats of Dahshur and a statue of baboon standing in the praise of the sunrise; each boat is more than 10 meters long and 2.3 meters wide.

The boats belong to King Senusret III from the Middle Kingdom; they are set to be shown inside a hall designated for them inside Sharm El-Sheikh Museum.

Moamen Othman, head of the museums sector, explained that these boats were discovered next to the pyramid of King Senusret III in Dahshur, and they were transferred to the Egyptian Museum to be re-installed and displayed.

The boats were transferred using the latest scientific methods to ensure their safety, where the vehicles were transported using a metal chassis made of stainless steel to easily move and lift the boats without affecting the body of the wooden boats.

Director General of the Egyptian Museum in Tahrir Sabah Abdel Razek previously clarified that transferring artifacts to the Grand Egyptian Museum, Sharm El-Sheikh Museum and the National Museum of Egyptian Civilization is ongoing using the latest scientific methods in order to protect the artifacts from any damages.

Head of the Central Department for Engineering Affairs, Antiquities and Museum Projects Waad Abul Ela previously noted that works in the museum has been resumed since September 2018, after a hiatus of about 8 years, precisely in the aftermath of the January 2011 revolution, due to the lack of the necessary funds.

Advisor to the Minister of Antiquities for Museum Display Mahmoud Mabrouk mentioned in previous statements that the exhibition scenario in the Sharm El-Sheikh Museum will illustrate the daily life of the ancient Egyptian during the New Kingdom, where the displayed artifacts portray the civilized life the ancient Egyptians were experiencing during that era.

Also, the museum's display scenario illustrates the ancient Egyptian's interest with the wildlife, revealing how the ancient Egyptians cared about animals, birds, reptiles and insects in terms of raising, sanctifying, domesticating and treating them.