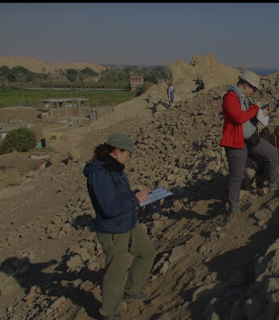 Archaeologists excavating in the city of Pathirys near Gebelein are searching for the home of Apolonia, a wealthy businesswoman who lived around 2,000 years ago.

The ruins of the city of Pathirys are located in Gebelein, south of modern-day Luxor. The Ancient Egyptian name for the settlement was Inerty, meaning "the two rocks, also called Per-Hathor "the House of Hathor", by the temple of the goddess Hathor.

The city was an important trading centre during the second and first century BC, serving as a regional capital. At the time, Egypt was in the orbit of influence of the Greek world and was ruled by the successors of Alexander the Great.

Previous studies by archaeologists Katelijn Vandorpe and Sofie Waebens have revealed a unique insight into people's lives from this period at Pathirys, with the discovery of contemporary tax returns, property, and rental agreements, transaction invoices, and private correspondence.

One notable inhabitant was Apolonia, a woman of Egyptian-Greek origins and a business owner. Back in Greece, women were wrongly considered subordinate to men and could not run a business independently. In Egypt, there was greater equality for women, as commented by a Herodotus during his visit to Egypt during the 5th century BC.

Contemporary documents suggest that Apolonia used her social position with mixed heritage to conduct her business interests more freely. Details discovered about her past suggests that she was an entrepreneur, owning several properties, had considerable wealth and A team of Polish archaeologists, working in collaboration with the Center of Mediterranean Archeology (CAŚ) UW and Wojciech Ejsmond, Lena Tambs from the University of Cologne, Julia M. Chyla, Piotr Witkowski and Dawid F. Wieczorek from the University of Warsaw has been conducting field surveys to locate the home of Apolonia in the hope to understand more about her life and the layout of the city of Pathirys.

They have revealed that the city was located on a steep slope of rock. At its top was a temple and fortress with surrounding houses. Preliminary findings show that the street layout was irregular and most of them led toward the entrance to the temple.

Ejsmond, Lena Tambs said: "The role that we could assign to today's town hall or civic buildings was played by the temple district and fortress, where archives, bank, notary public, and other important offices were located. The city was divided into several districts. However, it is difficult to say whether there were separate quarters for the rich and poor inhabitants."