The Nile Scribes had the pleasure of visiting Toronto's Coptic Museum of Canada last summer, where we were introduced to Coptic Icons and the modern artists creating Neo-Coptic iconography. This week we want to highlight the history of the Neo-Coptic School of Iconography and one of the modern Egyptian artists who is reviving ancient Coptic traditions: Victor A. Fakhoury.

St. Mark is regarded as the traditional founder of the Coptic Church after he brought Christianity to Alexandria during the first century AD. 'Copt' is now the familiar ethnic descriptor for the Egyptian Christian population, although the word originates from the Greek aigyptos (by way of the Arabic qbt) which was the name for Egypt during the Graeco-Roman Period.

Developing out of the ancient pharaonic tradition and influenced by the artistic traditions of the Classical World, Coptic art also showed connections to the Persian, Byzantine, and Syrian world at the time. With the Arab invasions under Amer Ibn al-As in AD 640, Egypt would eventually become part of a the wider Islamic world. The following centuries saw Coptic Egyptians engage with oscillating levels of tolerance from their Islamic rulers, a fact that also influenced their art and culture in many degrees. During the eighth and ninth centuries AD, Arabic became the official language in Egypt. Coptic, in turn, continued to be used as a liturgical language. The terms 'Copt' and 'Coptic' began to delineate the Egyptian Christian population from the growing Egyptian Muslim population.

What are Coptic Icons?

Icons of the Coptic Orthodox Church have purely religious subjects. They are designed to narrate a story of the holy person it features, typically Christ or a saint as well as biblical stories or events such as the Last Supper or the resurrection, qualities that have been termed as a "visual theology" (1). As ritually charged objects, icons represent the doorway between the sacred and the profane: while the objects themselves are not worshipped, some worshippers may touch or kiss the icon as a way of interacting with what they symbolise, and leave light candles in front of them as an expression of prayer.

Coptic icons are beautiful, often gilded, and brightly painted. Their primary function, however, is not as work of 'art' but as objects meant to connect the viewer with the sacred realm. Modern terminology reflects this nature: scholars describe them as 'written' objects, not 'painted.' The figures in the icon are always shown in two-dimensional, frontal orientation, with large eyes and ears, and a small mouth. Visually they are reminiscent of the Faiyum portraits – the lifelike portraits painted on wooden panels and wrapped into mummy shrouds atop the deceased in the centuries preceding the Coptic Period. There is also some evidence suggesting these mummy portraits may have hung in the homes of the deceased. In Coptic tradition, the sacred icons of venerated persons would be hung in Coptic churches.

Coptic icons, naturally, would show influences from ancient Egyptian tradition and a very well-known motif that was borrowed was the famous motif of the goddess Isis with her son Horus. Depicted in many cases as Isis suckling Horus, it was a motif that was popularly adopted by Egyptian kings to show their being protected by the gods. One well-known example of this motif shows the Sixth Dynasty king Pepy II as a child seated in the lap of his mother, Ankh-nes-Meryre II. Within the Coptic world, Neo-Coptic artist also adopted this motif in his depicting a baby Jesus being held closely by his mother the Virgin Mary. This motif is very common in Coptic art.

The early 1950s saw Egypt abolish colonial rule and establish the Arab Republic, effectively bringing together Copts and Muslims under one national identity. In 1959, Father Mina was enthroned as Pope Kyrillos VI and under his tenure a renaissance of Coptic culture flourished with the establishment of the Higher Institute of Coptic Studies including the Department of Coptic Art. It was in this climate that the work of Isaac Fanous deserves special mention as his pieces unleashed a wave of new interest in Coptic iconography, ultimately earning him the title: Father of Neo-Coptic Iconography.

Fanous emerged in a time when such interests in Christian iconography were felt also elsewhere: for example, in Russia, Leonid Ouspensky would go on to become a well-known iconographer. While taking a restoration course at the Louvre in Paris in the early 1960s, Fanous met Ouspensky and studied iconography under him and several of his contemporaries. Completing his degrees in the late 1960s, Fanous returned to Egypt where he was appointed as the Chair of the Art Department at the Higher Institute for Coptic Studies in Cairo. Over the course of the following decades, many Coptic churches in Egypt received many of his creations which blend Coptic traditions with ancient Egyptian influences. This latter element would become a hallmark of his influence as Fanous trained several well-known Neo-Coptic artists, which include Stéphane René among others.

The Icon Series of Victor Fakhoury

As a student of Isaac Fanous, Victor Fakhoury would himself become an important artist within the Neo-Coptic artistic movement. Born in Cairo in 1960, Fakhoury completed his M.A. in Coptic Art at the Coptic Orthodox Higher Institute of Coptic Studies in Cairo. He would go on to deepen his learnings by training under Isaac Fanous for several years. In his work, Fakhoury incorporates not only Coptic artistic traditions, but also current artistic learnings and methods, for example, elements from abstract art. In all his work, ancient Egyptians elements would shine through as it was common in traditional Coptic art which succeeded so eloquently in fusing together Egyptian, Coptic, and other motifs. The Icon Series, the first ten of which are in the possession of the Coptic Museum of Canada, presents a unique opportunity to explore in an intimate manner several of the works of Victor Fakhoury and learn first-hand about his motivations and inspiration in writing these icons. Helene Moussa, who studied many of Fakhoury's icons in detail, notes in regard to the eighteenth century Coptic artist Yuhanna al-Armani that "icons are in many churches across Egypt, but we know nothing about what he thought or what led him to write an icon in a certain way" (2) – you can imagine the added dimension of adding Fakhoury's own worded interpretation to the icons in the museum's possession.

Fakhoury draws significant inspiration from events and experiences Coptic Christians face in Egypt today. In regard to his first icon in the series, Fakhoury notes:

"I felt that we were about to go through turbulent times, and indeed after I wrote this icon [NS: "Blessed is Egypt My People"] the tragic events of Maspero and its martyrs took place. These events shook me to the core and strengthened my resolve to record them by writing icons. When I hear about such tragic events, it evokes very strong emotions in me, which make me want to write an icon that somehow expresses my reaction at that moment. […] I would like to point out that I wanted the icon to testify to the event. I was afraid that my icons might be seen as a historical record, which I definitely reject. The icon is always a sacred object and an Incarnation of the Word. (3)"

As part of expressing an icon as a sacred object, Fakhoury first seeks inspiration from the Bible before he writes the icon. Several titles of icons in this series, as a matter of fact, are also biblical verses (e.g. "Blessed is Egypt My People" from above which comes from Isaiah 19:25).

"The Martrys of Maspero"

The second icon in Fakhoury's series, it highlights one major event in recent Coptic history: it recalls the painful deaths of 28 persons most of whom were Coptic Christians in mid-October 2011. They had been protesting outside the Egyptian State Television and Radio Station building in Cairo over the burning of Coptic churches across Egypt. Fakhoury shows the 28 deceased within the boat in the centre of the icon. The boat, ripe with ancient Egyptian inspiration, showcases stylised lotus flowers at either end of the boat. With the boat nestled on the hands of God, the viewer is also drawn to the top of the icon. Here, a depiction of Cairo's famous St. Mark's Coptic Orthodox Cathedral rests in between two angels and on top of the cathedral is the cross motif with outspread eagle wings – this brings to mind immediately the sun-disk and outspread wings common on ancient Egyptian scenes. All in all, the icon brings ideas of reflection, regeneration, and rebirth to the forefront and is a testament to Fakhoury's skill in binding together ancient Egyptian and Coptic, whether traditional or more recent, motifs in light of recent events.

The curator of the Coptic Museum of Canada, Helene Moussa, is continuing her work on Victor Fakhoury and more may be heard at the upcoming annual meeting of the American Research Center in Egypt taking place in Toronto, Canada, April 3-5, 2020. The museum has also opened recently Beyond Museum Walls: Marguerite Nakhla (1908-1977), a special exhibition celebrating the life of this Egyptian artist. It brings together archival and documentary materials and also showcases three works by the artist, which were recently purchased by the museum.

We also recommend a visit to the museum's website, where our readers can see for themselves the ten Victor Fakhoury icons that are in the possession of the museum.

This blog is the second in a series on the Coptic Museum of Canada and its collections. The Nile Scribes are grateful for the help and support by Curator Helene Moussa and for permission to use photographs of the collection in our blog. 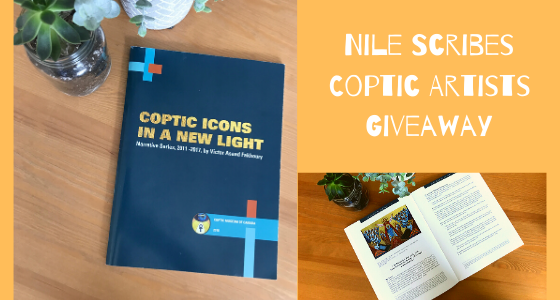 To start the new year off with a bit of fun, the Nile Scribes are giving away a book in conjunction with our recent blog highlighting the work of Neo-Coptic artist Victor Fakhoury. We are giving away the dual-language (English and French) book Coptic Icons In A New Light by Helene Moussa and published by the Coptic Museum of Canada.

To enter our giveaway, please complete the following 1-question survey telling us what kinds of blog posts you would like to see us write in the future.

Giveaway rules: There is only one (1) entry per person – email address required for notification. Participants may also gain one (1) additional entry, if they choose to subscribe to our newsletter. Giveaway ends 11.59 pm EST March 7, 2020 and the random winner will be drawn from the entries and notified one day later. The Nile Scribes are in no way affiliated with the book's author or publisher and this is not a sponsored giveaway.